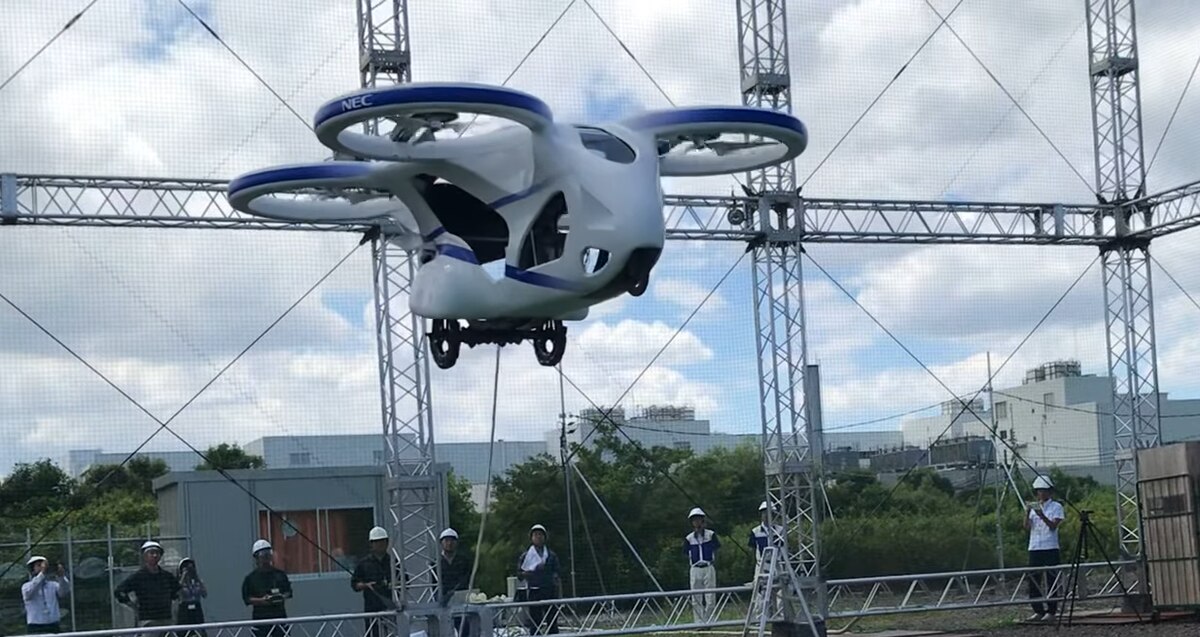 The “passenger drone” is a flying contradiction. It is an autonomous vehicle, with a human inside. Current language has yet to capture this disparity — the weird balance between terms indicating that no human, not even a pilot, is onboard, and the fact that this is a robot people step inside and which then transports them. Regardless of the terminology, the whole category of machine is fascinating: what could people do with autonomous robots they can ride?

On Aug. 4, 2019, Japan’s NEC Corp demonstrated its autonomous flying passenger vehicle. With three wheels and four rotors, the craft is informally dubbed a flying car, though like most autonomous flying passenger vehicles it most closely resembles an oversized quadcopter. Long promised by science fiction and technologists alike, flying cars have yet to become a part of daily life. Yet there’s something compelling about the drive, and modern attempts can inform what this new avenue for mobility might actually look like.

While the vehicles are primarily designed for urban and commercial markets, any advance in vertical mobility in that space is worth watching for military planners. Taking advantage of commercially driven developments could subsidize new military machines, and it’s not inconceivable that, if the technology becomes as prevalent as its designers hope, we could see versions modified like Hi-Luxes to become improvised weapons of future urban warfare.

The most significant development in modern car-sized flying autonomous vehicles is the use of rotors or ducted fans for vertical takeoff and landing. Winged cars, a few of which have been developed, are clunky beasts, awkward on roads and in the air alike. VTOL, though, allows a vehicle like this to operate from helipads or even smaller areas, and to land where people might actually want to go. Freed from the runways and hassles of an airport, VTOL taxis could, for a certain set of extraordinarily well-off commuter, bypass rush-hour traffic. It’s a promise that has attracted investment and development from companies like Uber and Bell, as well as multiple others.

While the promise of carrying a person remains the distant dream of such machines, the easier-to-realize more immediate reality will be cargo and logistics, with the possibility of maybe evacuating a human in a pinch. The chief advantage offered by the car-sized vehicles over jetpacks, hoverbikes, jet bikes and flying boards is the stability and interior offered by the larger size.

The technologies that enable vehicles like this are largely the same ones that enable drones at smaller and larger scales. Remote direction, autonomous stabilization, powerful batteries, the ability to maneuver in vertical space and potentially operate in cities, all of this could create a vehicle that provides a capability the commanders of the 2030s, who grew up with drones, might want in a machine.

There is still much work to be done to transform the prototypes from experiments to useful machines. That there are multiple companies on multiple continents pursuing it should be a promising sign for the industry as a whole, and for any military designers looking to piggyback on a drone-like flying car into a new urban battle machine.