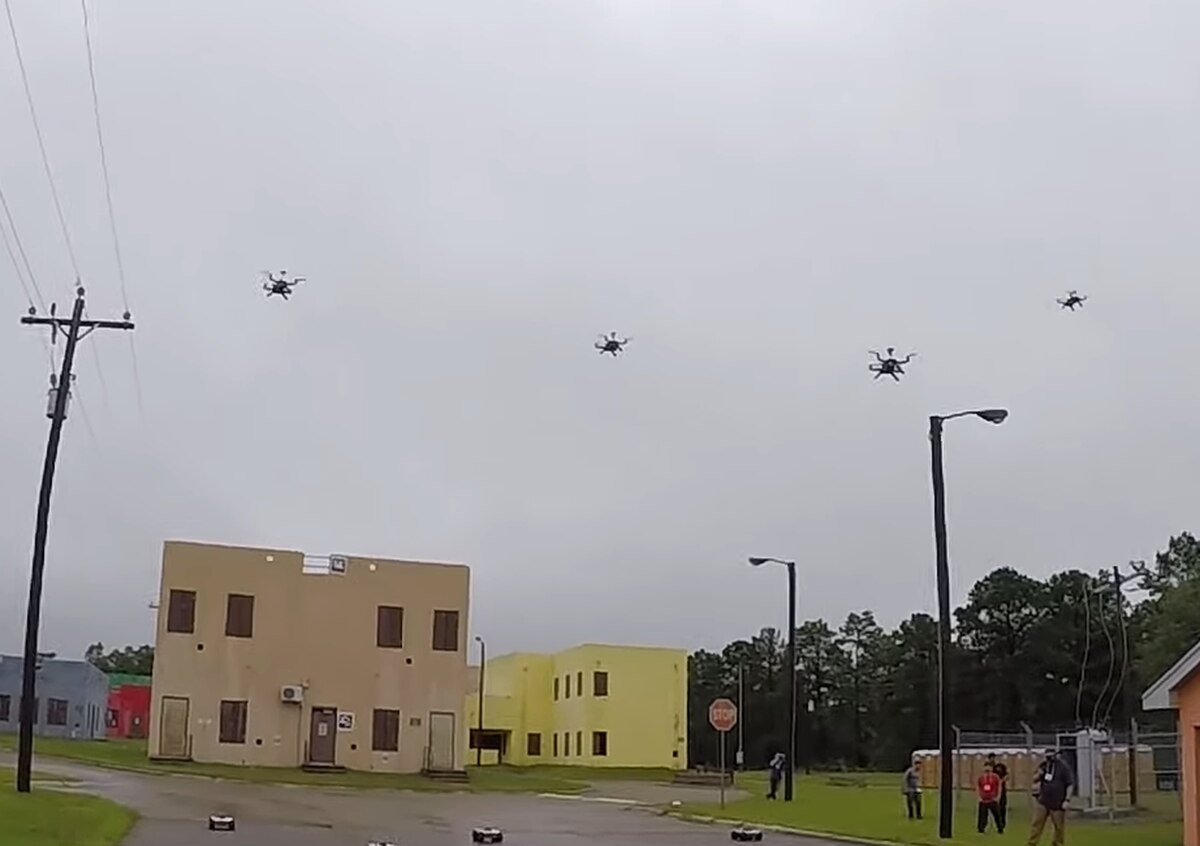 Against the gray sky, the black robots hum. The swarm moves without words, mapping the neighborhood below, a flurry of buzzing and plotting, sharp angles and short orbits, creating in real time a blanket of surveillance over the selected objective. Part of DARPA’s OFFSET (OFFensive Swarm-Enabled Tactics) program, the quadcopters are pieces in a greater whole, an incremental step to providing an expansive robot’s-eye view to humans fighting on the ground.

The neighborhood in question for this exercise was an urban warfare training complex at Fort Benning, Georgia, in June 2019. Flying through and over the “Selby Combined Arms Collective Training Facility,” the quadcopters worked with ground robots to identify locations of interest and then create a perimeter around that objective, in a process DARPA likens to “the way a firefighting crew establishes a boundary around a burning building.”

Firefighting looms large in the modern conception of swarm tasks. In January 2019, the Air Force Research Laboratory, together with the UK’s Defence Science and Technology Laboratory, launched a project for drone swarms to model wildfires, with lessons applicable to military and battlefield uses. Finding danger and plotting a path for humans through it is an ideal task for robots.

In DARPA’s OFFSET exercise, the swarm had to find a mock city hall, an objective inside that building, and then provide situational awareness over the area in runs that lasted 30 minutes. Using commercial off-the-shelf machines and custom software, the program wants to create in real life as close to the kind of real-time tactical information a person might find in a strategy video game.

OFFSET is scheduled to have new exercises and new updates roughly every six months for the next two years, with the June sprint the second in the series. The end goal is for swarms of up to 250 drones to operate autonomously, providing real-time information to humans who can then move through the battlefield confident that the area has at least been robotically scouted and monitored.

As the Pentagon’s blue-sky projects wing, DARPA is focused on advancing the technology to the point where it can be picked up and refined by other labs or industry. Building tactics from the new capabilities, and machines specific to swarm-human teaming, will have to come later. It’s worth looking at the swarms as a possible component of future battlefields, and when designing technologies to meet the needs of the now, keeping an open mind to how swarms might change or hinder those same functions.