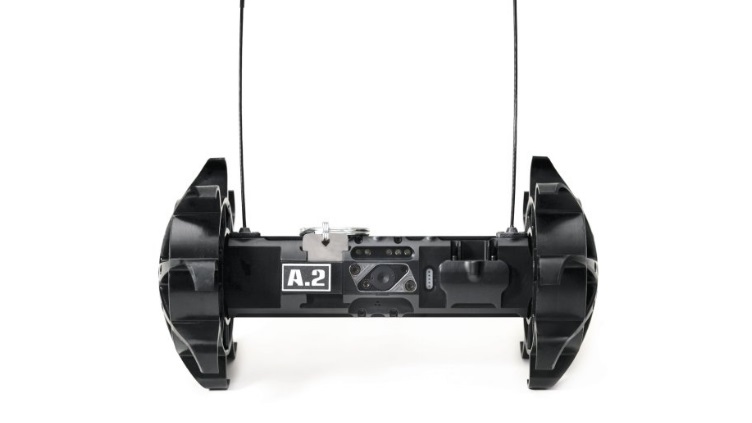 The Throwbot 2 in its standard configuration. It is available in three different configurations for search and reconnaissance applications. Source: ReconRobotics

ReconRobotics has partnered with Liberty Dynamic to introduce a flash-bang capability to the former’s Throwbot 2 unmanned ground vehicle (UGV).

The Throwbot 2 is a throwable microbot system that provides operators with real-time video and audio reconnaissance of indoor and outdoor environments through a handheld controller/screen.

The UGV utilises a ‘hooked flipper’ wheel system that enables it to clear obstacles of up to 5 cm and traverse a variety of terrain. The platform is designed to withstand drops of up to 9.1 m onto concrete and can be thrown horizontally up to 36 m, presuming an arc height of less than 9.1 m.

The system can transmit a 60° field of view (FoV) colour video at 30 fps, with one-way, listen-only audio, and is equipped with an infrared (IR) optical system that can illuminate up to 7.62 m away. The IR optical system automatically activates in low ambient lighting conditions. The unit is dust-tight and water-resistant with ingress protection ratings of IP66 and IP67.

The Enhanced Diversionary Device (EDD) is a non-lethal, reusable flash-bang that is controlled by a microprocessor. Liberty Dynamic claims that the EDD, which was unveiled in January, is safer to use than standard stun grenades.

“The M201A1 fuse commonly used in hand deployed devices such as a flash bangs have a published technical profile of 1.2 to 2 second time delay,” Chapman said. “The inconsistent 800 m/s time deviation is the difference between a successful entry into a tactical situation or a mistimed room entry.”

The initial flash as well as the heat of the canister can ignite flammable materials. Chapman noted, “They can also cause fires and secondary fragmentation because they burn very hot and explode on the ground.” These explosions can also turn surrounding debris into shrapnel.