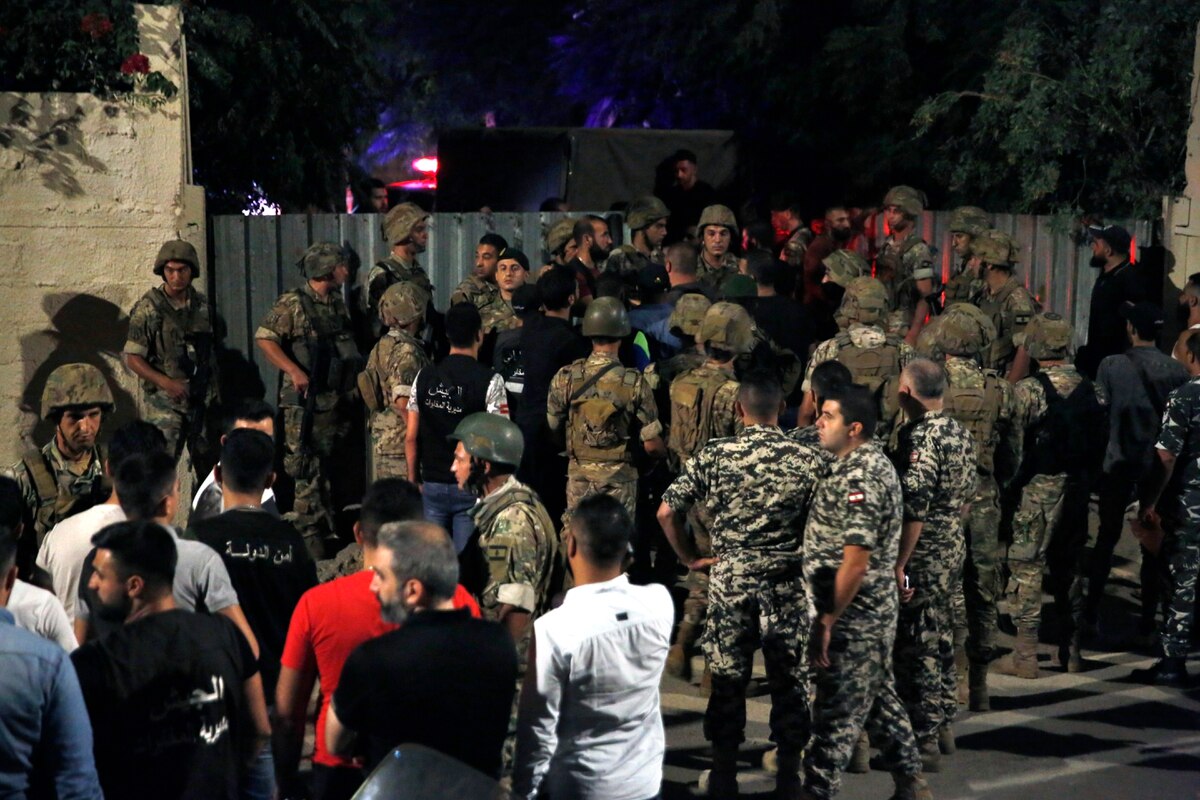 From the vast deserts of Saudi Arabia to the crowded neighborhoods of Beirut, a drone war has taken flight across the wider Middle East, raising the stakes in the ongoing tensions between the U.S. and Iran.

Since the U.S. withdrawal from the Iran nuclear deal last year, there has been an increasing tempo of attacks and alleged threats, notably this weekend, from unmanned aircraft flown by Tehran’s and Washington’s allies in the region.

The appeal of the aircraft — they risk no pilots and can be small enough to evade air-defense systems — fueled their rapid use amid the maximum pressure campaigns of Iran and the U.S. As these strikes become more frequent, the risk of unwanted escalation becomes greater.

The U.S. military nearly launched airstrikes against Iran after a U.S. military surveillance drone was shot down in June. Meanwhile, Israeli fighter jets attack targets in Syria on an almost weekly basis, including on Saturday night. Israel’s reason for the latest bombing: To thwart what it called a planned Iranian drone strike.

Israeli aircraft then buzzed over Beirut on Sunday after allegedly losing two drones hours earlier, raising the risk of a wider conflict between it and the Lebanese militant group Hezbollah. On Sunday evening, another drone strike hit an Iran-backed paramilitary force in Iraq, killing one commander and wounding another, members of the group said. It was not immediately clear who carried out the strike.

Amid the escalation, Iranian Foreign Minister Mohammad Javad Zarif made a surprise trip Sunday to the Group of Seven summit in France, at the invitation of the French president. 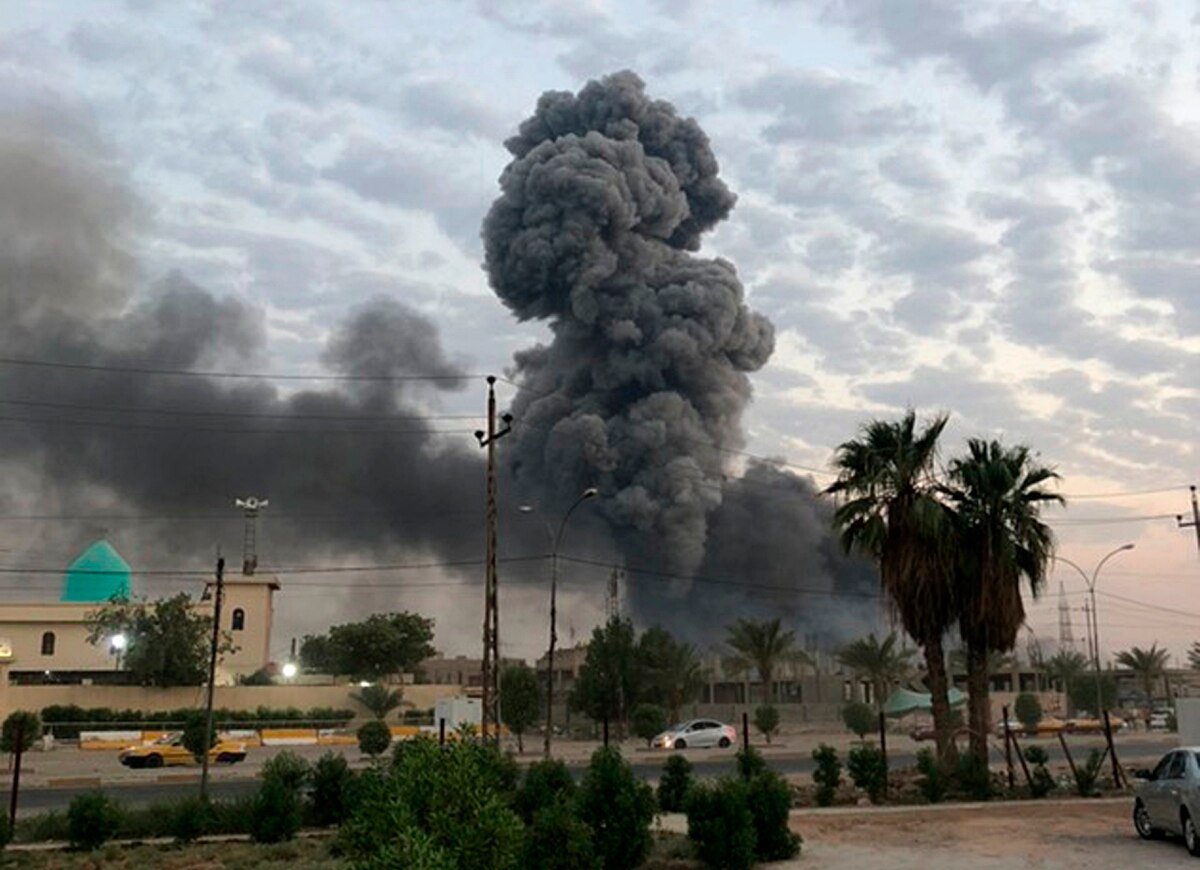 The mounting tensions are rooted in the May 2018 U.S. withdrawal from Iran’s nuclear deal with world powers. Under the deal, Tehran limited its enrichment of uranium in exchange for sanctions relief. In response to Washington’s withdrawal, Iran initially sought diplomatic support from European partners still in the accord, but ever-increasing American sanctions choked off its sale of crude oil in the international market.

This May, the nuclear-capable B-52 bombers, fighter jets, an aircraft carrier and additional troops to the region over what it described as threats from Iran. Mysterious explosions struck oil tankers near the Strait of Hormuz.

Coordinated drone attacks followed, first from the Iranian-backed Houthi rebels of Yemen. Major attacks targeted the kingdom’s oil infrastructure — one on a crucial East-West Pipeline, the other a major facility deep in the desert of Arabian Peninsula’s Empty Quarter.

Saudi Arabia immediately tied the attacks to Iran, its longtime Mideast rival. While Iran denies arming the Houthis, the West and United Nations experts say that drones used by the rebels mirror models used by the Islamic Republic.

Meanwhile, a suspected Israeli strike in Iraq last month targeted a base of Shiite militias allied to Iran — in what would be the first attack to be carried out by Israel in Iraq since 1981. Israel remained mum, and U.S. officials who linked the strike to Israel did not say if drones were involved.

Israel, meanwhile, acknowledged striking Syria on Saturday night, in what it described as a pre-emptive attack. The military said it prevented an effort by Iran to position so-called killer drones ahead of an attack on Israel.

Hezbollah leader Hassan Nasrallah disputed the Israeli version in a speech later Sunday, saying the Israeli strikes hit a Hezbollah rest house and killed two of the group’s members. He said that going forward, any Israeli drones that enter Lebanon would be shot down.

Broken windows are seen on the 11-floor building that houses the media office in a stronghold of the Lebanese Hezbollah group in a southern suburb of Beirut, Lebanon, Sunday, Aug. 25, 2019. (Bilal Hussein/AP)

The drones Israel says it was targeting in Syria are known to experts as loitering munitions and are similar to the ones being used by the Houthis. The bomb-carrying drone flies to a destination, likely programmed before its flight, and either explodes in the air over the target or on impact against it.

Israeli Prime Minister Benjamin Netanyahu, who is seeking re-election in September, paraphrased a Talmudic passage on self-defense after the attack: “If someone rises up to kill you, kill him first.”

Israel’s military released a map Sunday of what it said were the Iranian supply routes to deliver the planes to Syria. This included what Israel described as the planned drone launch site in the Syrian village of Aqraba, as well as another location in the village of Arneh where a previous launch attempt was allegedly thwarted last Thursday.

Lt. Col. Jonathan Conricus, an Israeli military spokesman, said Israel had been monitoring the activity for weeks and struck when it became clear that Iran’s Revolutionary Guard planned to launch the aircraft. He said it is easier to destroy agile, hard-to-detect drones before they are airborne.

“We know the Quds Force spent a lot of effort and time trying to execute this plan,” he said. The Quds, or Jerusalem, Force is the Guard’s expeditionary unit.

Iran denied Israel’s strikes in Syria did any damage to its forces.

“It is a lie,” Guard Gen. Mohsen Rezaei said, according to Iran’s semi-official ILNA news agency. However, Rezaei added that the “defenders of Syria and Iraq will soon give an answer,” without elaborating.

Rezaei’s response shows the escalatory danger of drone strikes. Overnight in Lebanon, one alleged Israeli drone crashed in Beirut while another exploded, authorities there said, calling it an Israeli act of aggression and violation of Lebanese sovereignty.

In his speech, Nasrallah said one of the drones had been flying low among buildings.

Israel did not acknowledge the incident.

Hezbollah was quick to say that it did not fire on any of the drones, underscoring the group’s keenness to avoid further escalation with its southern neighbor.

The developments, however, present a direct challenge to the group, which is still recovering from a bruising years-long conflict in neighboring Syria that saw thousands of its fighters killed and wounded while fighting alongside President Bashar Assad’s forces.

Hezbollah, which is part of a fragile national unity government already struggling to deal with a serious economic and financial crisis, does not wish to be seen as dragging the country into another ruinous war with Israel, but may be feeling pressured to respond to perceived Israeli provocations.

In the overnight incident, the first drone, apparently unarmed, crashed onto the roof of a Beirut building where Hezbollah’s media office is located and caused damage to the group’s offices.

The group has repeatedly warned Israel to stop its nearly daily violations of Lebanese airspace, but has so far shown restraint despite a series of Israeli attacks that targeted Hezbollah in Syria. Any retaliation, however, risks sparking an unwanted conflict with Israel that the group would much rather avoid.