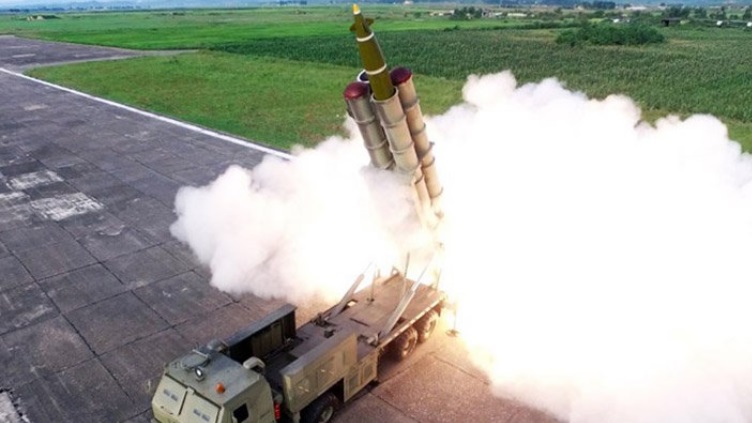 North Korea’s new weapon system is fitted with four launch tubes that can fire what appear to be large-calibre guided-artillery rockets. Source: KCNA

North Korea announced on 25 August that it successfully test-fired what it described as a “newly developed, super-large multiple rocket launcher [MRL]” the previous day: the Northeast Asian country’s seventh weapon test within a month and a further indication that it continues to modernise its tactical weapon systems.

Pyongyang’s state-run Korean Central News Agency (KCNA) reported that the test-firing “proved that all the tactical and technological specifications of the system correctly reached the preset indexes”.

Images of the test launch released by KCNA show an 8×8 transporter-erector-launcher (TEL) vehicle fitted with four launch tubes at what appears to be an airport runway. One of the images shows a large-calibre projectile being launched that seems to have four small control surfaces on its nose: a feature seen on guided-artillery rockets used in North Korea and other countries. The calibre of the projectile shown in the image appears to be larger than 370 mm.

The KCNA did not provide further details about the new system, quoting only North Korean leader Kim Jong-un as praising the country’s national defence scientists for being “so clever as to conceive out of their own heads and design and complete the weapon system at one go-off, although they have never seen it”.

Kim was also quoted as underscoring “the need to push ahead with an ‘indomitable offensive campaign’ to put our strength onto the level desired by us to continue to step up the development of Korean-style strategic and tactical weapons for resolutely frustrating the ever-mounting military threats and pressure offensive of the hostile forces”.

South Korea’s Joint Chiefs of Staff (JCS) had said the previous day that North Korea fired what appeared to be two “short-range ballistic missiles” (SRBMs) at 0645 h and 0702 h local time from an area near the eastern town of Sondok in the country’s South Hamgyong Province.