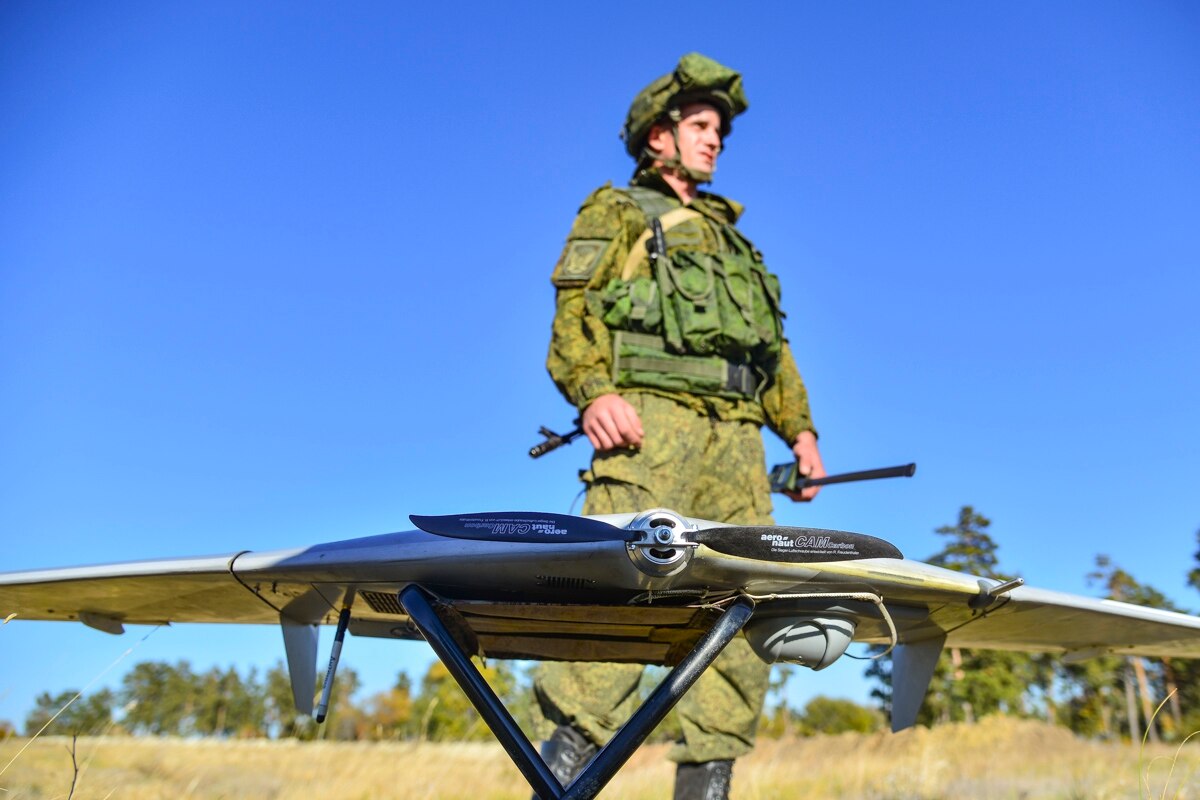 At a security exposition in Moscow in late October, researchers from Russia’s oldest Air Force academy presented a vision of the future of war: a swarm of drones, more than 100 strong, each carrying a small explosive payload, designed to destroy convoys of vehicles.

The display is a called shot.

While a far cry from reality today, the technology stands as a significant statement of intent. Projections of future capability matter because they shape the development of weapons and tools in the present. That Russia sees armed drones swarms as a future part of its battle plans could shape how nations develop counter drone tools, even if the plans never materialize.

Dubbed Flock-93, the swarm concept on display at Moscow’s Interpolitex-2019 security exhibition, is being developed by the Zhukovsky Air Force Academy, along with Autonomous Aerospace Systems – GeoService, based in Krasnoyarsk, and Group Kronstadt, based in St. Petersburg. Kronstadt has worked on Russia’s Orion medium altitude long endurance military drone. The Zhukovsky academy built, and then iterated upon, the internet-famous owl-shaped drone.

“These are specialists that are no stranger to experimentation and are taking a long-term outlook on how UAVs should serve the Russian military,” said Samuel Bendett, a research analyst at the Center for Naval Analyses.

As outlined, the drones of Flock-93 will be flying wings and have vertical takeoff and landing (VTOL) capability, promising both flexibility and target range of around 95 miles. While many fixed-wing drones have mounted quadcopter-style rotors on top for vertical lift, embedding those in a flying wing body, especially one cheap enough to use for vast swarms, seems a daunting hurdle. That said, flying wing drones with rotors inside the wing have already been designed, and vectored thrust gave a flapless flying wedge a lower radar profile than it would have had with flaps.

Making the swarm drones VTOL means the drones could operate from anywhere people on foot can get and set the drones up. We think of flying machines as largely an aviation or even air force function, but much of the future likely involves drones adding airstrikes as an infantry ability.

“Russians think that this swarm will be an effective weapon in the fight against terrorists and high-tech adversaries,” said Bendett, a fellow in Russia studies at the American Foreign Policy Council. “Based on what the Russians have seen and learned in Syria — which is the single most important Russian military experience today — a serious damaging effect can be achieved by a UAV swarm attack.”

The planned payload for each of the Flock-93 drones is 5.5 pounds of explosive, to be targeted by a “monocular vision system” with a promised accuracy of measured in inches, not feet. The targets for such a swarm are trucks and lightly armored vehicles, big enough where it makes sense to use an explosive from the air but small and unprotected enough that the explosives will be effective.

While drone swarms are a good answer to single-shot counter-drone systems, a variety of tolls from jammers to fast-burning lasers firing in sequence to high-powered microwave weapons can all be effective against multiple targets in the sky. That counter measures exist has to be weighed against the desired utility of the system designed, but it’s hardly the biggest obstacle facing Flock-93.

“Russia has not demonstrated a UAV swarm in action yet,” said Bendett. “So the statement that Flock-93 will have dozens of UAVs is an interesting one – we have not seen Russia working with such a large number of unmanned aerial systems, at least not publicly.”

Some smaller experiments, with drones numbering in the handful, instead of the dozen, have been attempted by organizations like the Advanced Research Foundation, Russia’s DARPA analog, and the ERA Technopolis.

The Zhukovsky Academy elaborated on the role of the Flock-93 swarming, saying “if the lead drone is destroyed by enemy fire or lost for one reason or another, then its functions are transferred to another UAV that was previously led by the leader. Thus, reconfiguration takes place — and so on until the loss of the last two devices.”

This emphasis on military robots being able to follow even after the loss of a nominal leader is something we’ve seen before, in the design of a Russian cave-exploring snake robot.

As for the autonomy of the system, the goal seems to be more autonomy in execution than in direction. While the swarm will be built to navigate pre-plotted coordinates, the swarm is designed to be directed from human-crewed aircraft or ground control stations.

Given the potential of 550 pounds of flying explosive, distributed among 100 semi-autonomous aerial robots, building human control seems essential, even if it, too, will be a difficult proposition.