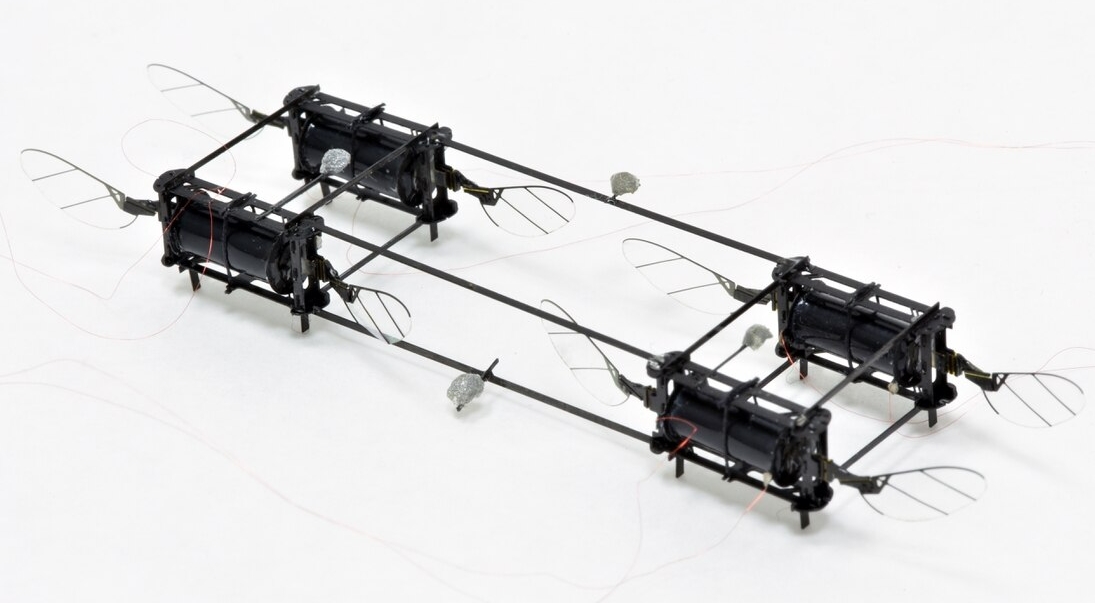 The flying machine takes off, under the power of its own flapping wings. “Ride of the Valkyries” plays. The RoboBee, an insect-sized drone built by the Harvard Microrobotic Lab, has a new trick. Thanks to soft muscles, the new bee-sized robots can collide without worry.

It might not warrant the full operatic treatment, but it’s a big step for viable microrobots.

Every flying machine is a constraint of airframes, power supply and thrust. While rotors work at a great many scales, part of the RoboBee project and its charm has been thrust through flapping wings.

In a demonstration announced in July, those flapping wings were enough to pull the robot airborne, with batteries slung underneath it. It was the RoboBee’s first untethered flight, remarkable if incredibly short-lived.

For the new demonstrations, the tethers are back.

Progress on aircraft and robotics are rarely linear, and this further underscores the mishmash of iteration and experimentation at play. While untethered fight is almost certainly a necessity for any military or rescue work, the new soft muscles in the robot are not without their own benefit.

“One advantage of small-scale, low-mass robots is their resilience to external impacts,” said Elizabeth Farrell Helbling, a former graduate student at SEAS and a coauthor on the paper said in a release. “The soft actuator provides an additional benefit because it can absorb impact better than traditional actuation strategies. This would come in handy in potential applications such as flying through rubble for search and rescue missions.”

Of related note, the RoboBees can now work together when harnessed to form sort of a larger, mega-bee, which can fly in a more directed way. If one RoboBee isn’t quite strong enough to lift a battery and a sensor, a team of RoboBees might be able to pull it off.

“These robots can sense and withstand collisions with surrounding obstacles and can recover from in-flight collisions by exploiting material robustness and vehicle passive stability,” the authors wrote in Nature. “We also fly two micro-aerial vehicles simultaneously in a cluttered environment. They collide with the wall and each other without suffering damage.”

Existing on the smallest edge of explored controlled flight, the ultimately utility of microdrones is at best unclear. That the RoboBees are resilient enough to fly together in enclosed spaces without crashing is promising, but even a cloud of rocket robots thrown into an air duct will remain the stuff of science fiction or action thrillers without any meaningful payload.