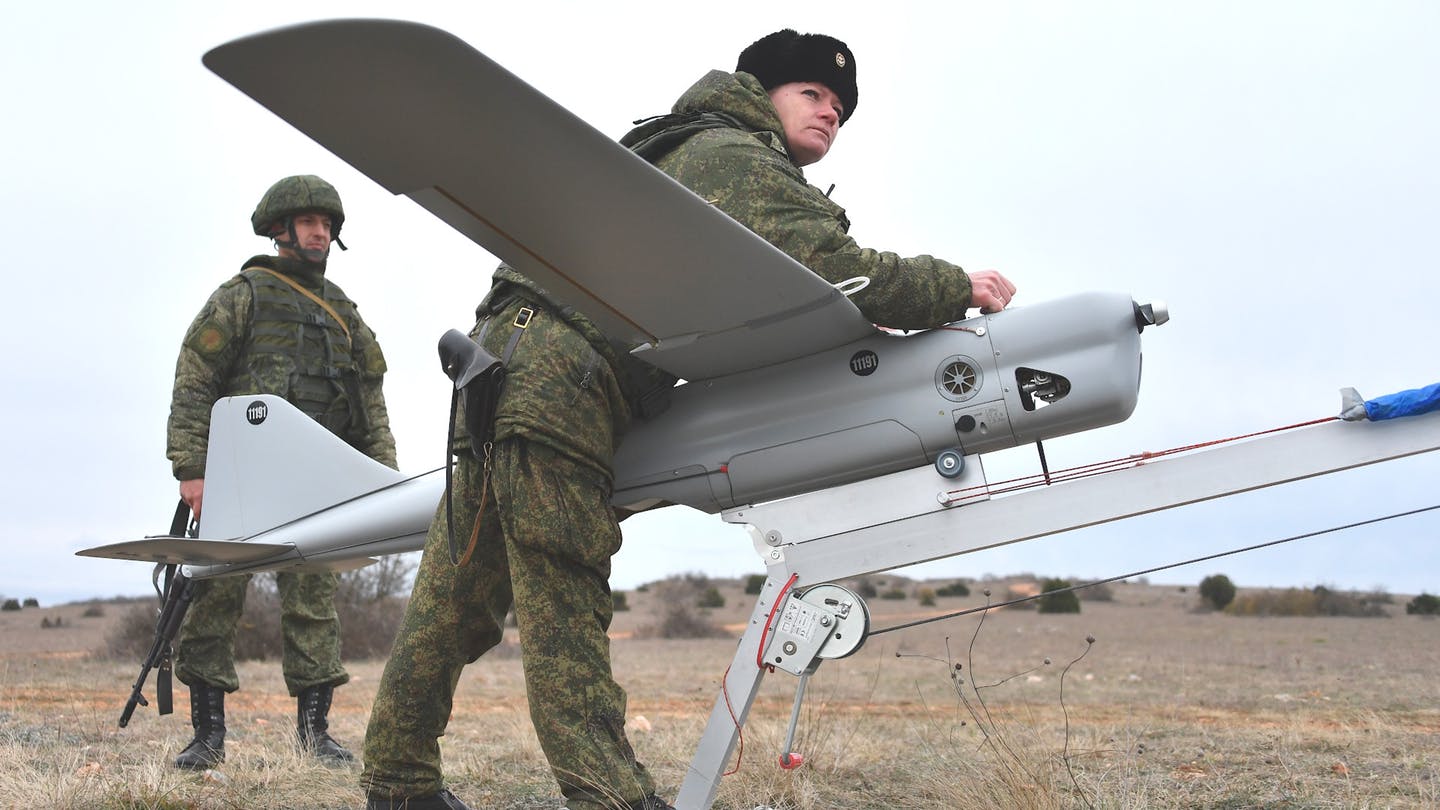 The Russian military reportedly integrated unmanned “strike groups” consisting of armed Orlan-10 unmanned aircraft, as well as other variants of that drone with sensor and electronic warfare payloads, to locate and try to destroy critical air defense systems, command posts, communications nodes, and more during a major exercise earlier this year. This news comes a month after researchers at Russia’s Zhukovsky Air Force Academy announced it was working to develop a drone swarm to attack enemy convoys, among other potential target sets.

On Nov. 7, 2019, Russian newspaper Izvestia, citing anonymous officials within Russia’s Ministry of Defense, first reported the use of the drone strike groups during an exercise in September 2019 called Tsentr-2019, or Center-2019. This was the culmination of a series of exercises that had begun in June. The Kremlin holds these drills each year to demonstrate its ability to prosecute a potential large scale conflict in the center of the country. The 2019 iteration was especially large, with around 128,000 personnel from Russia, as well as China, India, Pakistan, Kazakhstan, Kyrgyzstan, Tajikistan, and Uzbekistan.

The Russian military’s reportedly employment of armed Orlan-10s is notable by itself. In July 2019, Izvestia had reported that Russia was looking to field small armed drones, but that these would likely be quadcopter type designs carrying very small grenade-like payloads.

The Orlan-10 only has a maximum takeoff weight of around 33 pounds, which would suggest that whatever weapons it might be able to carry are quite small. It certainly calls into question Izvestia‘s description of their new arsenal as including “special guided missiles.”

It’s also possible that there was some confusion in the information from its sources and that the armed component of the drone strike groups was actually another type of unmanned aircraft, such as the Carnivore, which Russian firm NPP Mikran unveiled in 2018. This unmanned aircraft is larger than Orlan-10, with a maximum weight of around 88 pounds, and a promotion video showed one potential variant carrying a payload of six standard Russian RGD-5 hand grenades, as well as small sensor turret.

The other components of the strike group were Orlan-10s carrying sensor turrets with electro-optical and infrared cameras or the Leer-3 electronic warfare systems. Both of these are known variants that have been in service for some time now.

The concept of operations demonstrated during Tsentr-2019 involved the sensor and electronic warfare-equipped Orlan-10s locating and classifying targets of interest. The armed drones would then move in to conduct mock attacks. Depending on the size of the weapons these Russians actually expect these unmanned aircraft to employ in real combat, the goal may be more to achieve mission kills on target systems through the destruction of radars, antennas, or other smaller, but nevertheless vital components.

This sounds very much like the next logical evolution of tactics the Russians have already honed in Ukraine, where Orlan-10s with sensor and electronic warfare payloads have been conducting similar operations to locate targets, as well as jam them, for years now. However, in that conflict, at least so far, mortars and other artillery weapons have been the primary assets called upon to actually destroy the targets that the drones find.

The Russian drone strike groups operating during Tsentr-2019 also worked to wreak havoc on enemy rear areas, including targeting convoys of reinforcements, according to Izvestia. The story noted that even small munitions could cause substantial damage to fuel and ammunition depots. Though not mentioned in the Russian newspaper story, in 2017, Ukranian officials initially suggested that a massive explosion at the country’s largest ammunition depot in Balakliya was the result of a small drone dropping an incendiary device onto the facility. Ukranian officials subsequently revised their position, saying they still suspected sabotage, but that there was no evidence that a drone delivered the weapon that set off the blast.

It is very likely that Russia is exploring tactics, techniques, and procedures for employing armed drones, in general, as it gets closer to fielding larger, longer endurance types, such as Predator-sized Orion-E. On Nov. 1, 2019, state-run media outlet TASS, citing an anonymous source within Russia’s defense industry, reported that Orion-Es had carried out strikes using unspecified munitions in Syria as part of a field test earlier in the year.

The Russians are also developing an armed version of the Forpost drone, itself a license-produced version of the Israeli Searcher II. The Kremlin is proceeding with the development of the Altius-U, which flew for the first time in August 2019 and is also expected to be able to carry weapons, as well. These efforts are in addition to the much more advanced S-70 Okhotnik-B unmanned combat air vehicle (UCAV) program.

In October 2019, researchers with the Zhukovsky Air Force Academy had separately announced that they were working on a drone swarm concept, known as Flock-93, which could involve up to 100 small vertical take off and landing capable unmanned aircraft, each with an explosive payload weighing around five and a half pounds. It is unclear what specific type of drones Zhukovsky plans to use as part of Flock-93, but the goal is for the swarm to have a range of just around 95 miles.

The researchers from Zhukovsky also did not say if they will be designed to drop a weapon on their targets or operate as suicide drones, though the latter seems much more likely. They did note that their plan was to develop a true autonomous swarm, where if one drone were to get shot down, another would immediately take over the tasks its fallen comrade had been performing, according to C4ISRNet. Networked swarms, especially those utilizing drones with various different capabilities, offer a host of other benefits, which you can read about in greater detail in this past War Zone piece.

Group Kronstadt, the firm behind Orion, and Autonomous Aerospace Systems-GeoService are also involved in Flock-93. Zhukovsky itself is notably responsible for developing multiple iterations of an owl-shaped reconnaissance drone.

The main target for Flock-93 is reportedly enemy convoys consisting of lightly armored or unarmored vehicles, including supply vehicles in rear areas, similar to the missions that the drone strike groups reportedly conducted during Tsentr-2019. Drone swarms, by their nature, are ideal for confusing and overwhelming hostile air defenses, as well.

“Russia has not demonstrated a UAV swarm in action yet,” Samuel Bendett, a researcher with the Center for Naval Analyses think tank, told C4ISRNet. “So the statement that Flock-93 will have dozens of UAVs is an interesting one – we have not seen Russia working with such a large number of unmanned aerial systems, at least not publicly.”

However, what is clear is that the Russians are very invested in expanding the size of their drone fleets and the scope of operations they are capable of undertaking. The evolution of Russia’s use of the Orlan-10 in Ukraine, as well as Syria, by itself, was a good indicator of this even before Izvestia new report on how the drones performed during Tsentr-2019.

Beyond that, the Kremlin has experienced for itself just how destructive and otherwise frustrating even relatively low-tech mass drone attacks can be during its campaign in Syria and has otherwise been watching unmanned developments unfold around the world. In addition, small cheap swarming drones would be a low-cost, but high-reward capability for Russia, even just as a deterrent against potential adversaries.

This reality is only becoming more apparent, in general, in hotspots around the world. Other large nation states, such as China, are making similar investments in increasingly advanced unmanned aircraft and drone swarm technologies, but smaller countries and non-state actors are increasingly gaining access to more limited, but still very valuable drone capabilities, too.

Unprecedented suicide drone and cruise missile attacks on oil-related sites in Saudi Arabia in September 2019 underscored just how much damage it is possible to do with relatively simply technology and limited resources. There is evidence that Iran at least actively supported these attacks, if it did not carry them out directly. The over-arching significance of this incident was something the War Zone highlighted at the time and has been sounding the alarm about for years.

For Russia, the use of drone strike groups involving multiple unmanned aircraft with diverse capabilities operating together during Tsentr-2019 is certainly new, but, by every indication, it is also something that looks set to become a very common component of how that country wages war in the future.