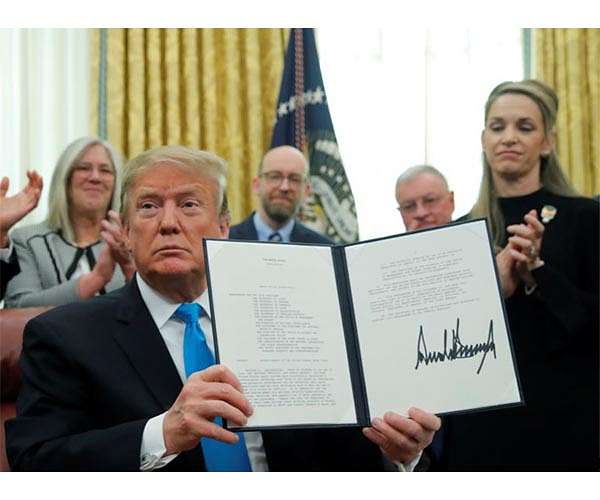 U.S. President Donald Trump displays the “Space Policy Directive 4” after signing the directive to establish a Space Force as the sixth branch of the Armed Forces in the Oval Office at the White House in Washington, U.S., February 19, 2019. File Photo Reuters/Pool

The Trump Administration and United States Congress are currently in discussions regarding a proposal to create and fund a service branch within the U.S. Air Force that would assist in deterring conflict in space.

Over time, the Space Force would evolve to become a stand-alone branch of the armed services. Scott Pace is Executive Secretary of the National Space Council. He explained why space is now considered what the Pentagon calls a “war-fighting domain”:

“Some people say: are we going to militarize space? And the answer is space has really been a military domain since the Soviet Union launched Sputnik. They used, actually, a converted ICBM to do it. So space has been a realm of military activity really since the very beginning. It’s been used for reconnaissance.

It’s been used for communications. It’s used for navigation. … What space has not been, has been a war-fighting domain. And, what’s become different in the last few years, ever since the 2007 anti-satellite test that China conducted, where they destroyed one of their own weather satellites, we’ve seen a rapid and steady growth in anti-satellite weapons by Russia and China.

Most of them ground based. … China and Russia have, of course, observed how dependent we are on space for our military activities, and therefore, they’ve been building weapons systems to place those capabilities at risk.”

Executive Secretary Pace explained that similar to U.S. nuclear strategy, deterrence of any kind of battle is the key goal in space. The Space Force, which would be responsible for organizing, training and equipping military and civilian personnel, would be vital to that deterrence.

“The Space Force,” said Vice President Mike Pence, “Will be a vanguard to defending our nation, defending our freedom, and defending the rights of all freedom-loving nations in the vast expanses of space.”