By: Aaron Mehta and David B. Larter 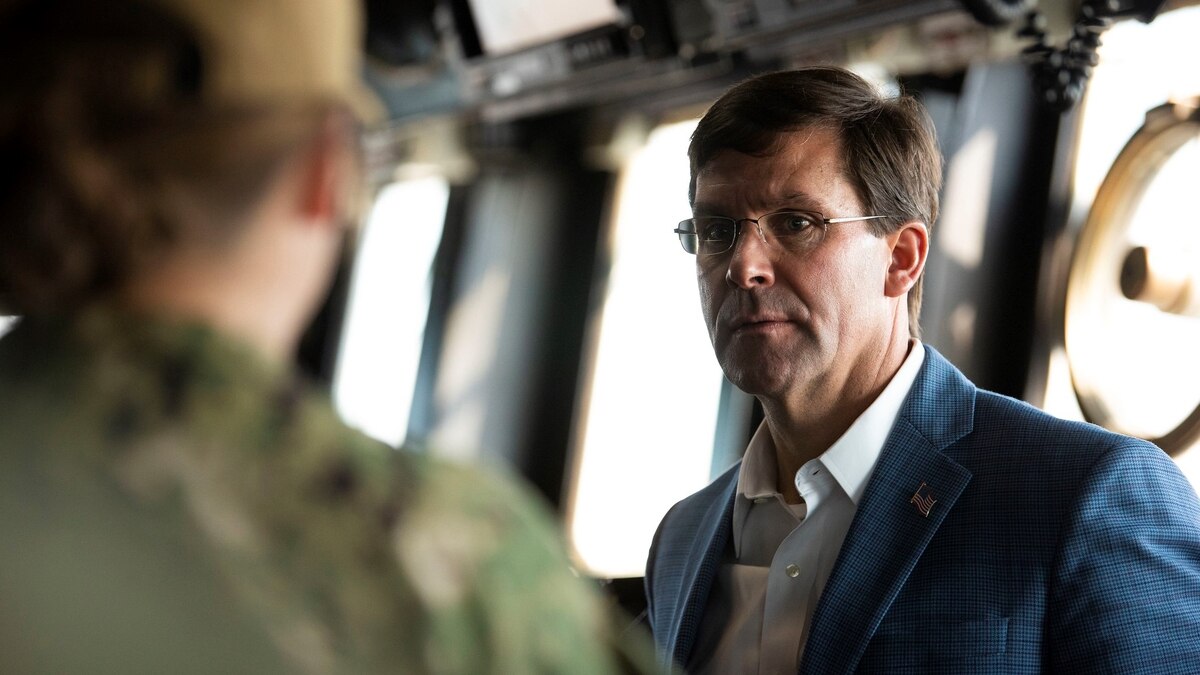 WASHINGTON — Despite expected cuts to shipbuilding programs in the fiscal year 2021 budget request, Secretary of Defense Mark Esper is committed to a bigger, but much lighter, naval force, he said in an exclusive interview with Defense News.

In the wake of reports that the Navy may cut shipbuilding in its upcoming budget request, Esper said he is “fully committed” to building a fleet of 355 ships or larger. But to get there, the Navy is going to have to fundamentally reshape itself around smaller ships that can be more quickly bought than the large, exquisite designs the service now relies on — a shift that could have big implications for both the industrial base and the carrier force.

Such a plan would mark a departure from the current Navy force structure assessment that calls for twice the number of larger ships over small surface combatants: 104 large, 52 small. But inverting that structure is essential to building a bigger, more deadly fleet that lives within the constraints of future budgets that the Pentagon expects to remain largely flat, Esper said.

To get there, the Navy must push hard on fielding lightly manned ships, Esper said, an effort that has been a major focus of Naval Sea Systems Command’s Unmanned Maritime Systems Program Office in recent years.

The first step, though, is getting through the process of figuring out what the fleet should look like.

“What we have to tease out is, what does that future fleet look like?” Esper said. “I think one of the ways you get there quickly is moving toward lightly manned [ships], which over time can be unmanned.

“We can go with lightly manned ships, get them out there. You can build them so they’re optionally manned and then, depending on the scenario or the technology, at some point in time they can go unmanned.

“To me that’s where we need to push. We need to push much more aggressively. That would allow us to get our numbers up quickly, and I believe that we can get to 355, if not higher, by 2030.”

In addition to the reported cut of a Virginia-class submarine out of the FY21 budget, it is expected that other cuts may be coming in the short term for the Navy.

Late last year, a memo from the White House’s Office of Management and Budget to the Defense Department, obtained by Defense News, outlined a series of cuts over the next five years that OMB contends would shrink the size of the fleet.

The cuts outlined in the OMB memo included cutting a submarine, a next-generation frigate and a Flight III Arleigh Burke-class destroyer from the 2021 budget. On Thursday, Bloomberg reported that the Navy intends to request eight ships in its 2021 budget, which would be four fewer than was requested in 2020, but that the budget restored the missing Arleigh Burke.

The Navy contends that even with the cuts, the service is still on a path to growth. In a recent interview with Defense News, acting Secretary of the Navy Thomas Modly said the budget documents that leaked were not final.

Esper noted that his stamp on the 2021 budget was relatively limited, given he took office in August, at which point most of the service budget work had already been completed.

“The services have already developed their budgets at that point,” Esper said. “So now it’s at OSD level. As you know, at this point I was able to go through budgets, free up money. I was able to move some money around, but, to me, my big impact will be on the upcoming budget.”

Esper’s backing of a larger Navy built on the backs of lightly or optionally manned ships echoes calls by Modly to get to a fleet of 355 ships in the next 10 years, and is in line with recent statement by the Navy’s top officer, Chief of Naval Operations Michael Gilday.

At the USNI Defense Forum in December, Gilday said the Navy needed to change the way it built its ships.

“I know that the future fleet has to include a mix of unmanned,” Gilday said. “We can’t continue to wrap $2 billion ships around 96 missile tubes in the numbers we need to fight in a distributed way, against a potential adversary that is producing capability and platforms at a very high rate of speed. We have to change the way we are thinking.”

Congress, however, has been reluctant to back the push for more unmanned ships, believing that the Navy hasn’t done enough work on how the concept of operations would work or how they’d support them.

Esper said his office would be taking a leading role in bringing Congress to the table on a new fleet design.

“DoD will run this … I want to invite some of our congressional interested parties in, certainly from the defense committees, to observe the process and watch what we’re doing and how we’re going about it,” Esper said. “That’s part of what I want to do, is to invite folks in.”

Retired Navy and defense officials will also be involved in the planning and outreach process to make sure the department is on the right track, Esper continued.

“We talk about the gray beards as validators, folks who make sure that nobody’s putting their finger on the scale, that we’ve considered all factors,” Esper said. “I want it to be that type of process, if we can get there.”

Expanding the fleet with more small, lightly manned ships will also increase opportunities for smaller shipyards to enter the shipbuilding industrial base, a proposal that may be attractive for congressional members in an election year.

The secretary stressed that “the United States must have an expanded and healthy industrial base with modern shipyards” to make such a reality happen, adding that “I think we can actually expand the number of shipyards in the United States and highly skilled workers [as well] around the country to ensure adequate capacity.”

In terms of planning, Esper said the Pentagon’s Office of Cost Assessment and Program Evaluation (CAPE), along with the Navy, will be conducting a series of war games and exercises in the coming months in order to figure out the way forward. But any major decisions will be based around the completion of a new joint war plan for the whole department, which the secretary said should be finished this summer.

“I think once we go through this process with the future fleet — that’ll really be the new foundation, the guiding post,” Esper said. “It’ll give us the general direction we need to go, and I think that’ll be a big game changer in terms of future fleet, for structure, for the Navy and Marine Corps team.”

As the Defense Department looks to craft a lighter Navy, the obvious question is: What will become of the Navy’s 11 super carriers? Defense Department officials such as Undersecretary of Defense for Research and Engineering Mike Griffin have publicly questioned whether ground-based hypersonic missiles might more effectively deter China than an aircraft carrier that he believes is increasingly vulnerable.

Esper said he’s not sure what the ultimate answer is on aircraft carriers – but rejected the idea there is a binary choice to be had.

“This discussion often comes down to a binary: Is it zero or 12?” Esper said. “First of all, I don’t know. I think carriers are very important. I think they demonstrate American power, American prestige. They get people’s attention. They are a great deterrent. They give us great capability.”

The Navy may have to think about new ways of building carriers, however, if they are going to stay relevant in the future, Esper said. As an example, he pointed to what Japan is doing with its F-35B jump-jet models, which have been tested for use on lighter ships previously designed for use with helicopters.

“There are various ways to do carriers,” Esper said. “So, we can talk numbers or we can talk the sizes of carriers, right? There’s been discussion in the past about: do you keep building big carriers or do you go to smaller carriers, Lightning carriers? Acting Secretary Modly and I have talked about that.

“I think this gets into the future fleet designs we look at. That will be one element that we look at.”