“The fighter jet era has passed,” says Musk. The future, he averred, is “autonomous drone warfare.” 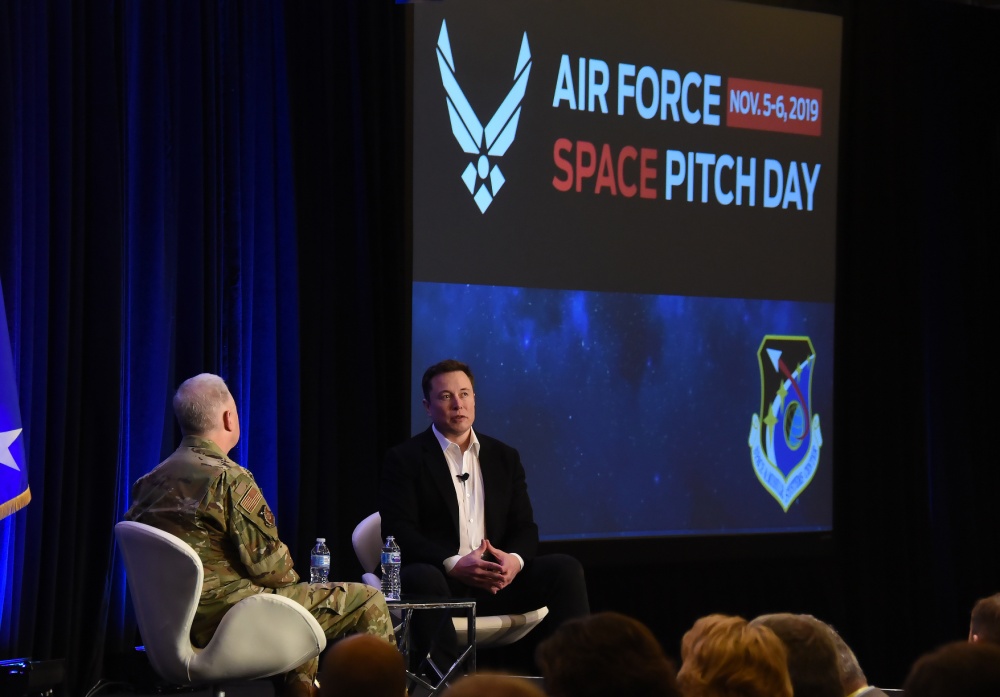 AFA 2020: China’s economy is going to eventually reach “at least twice” the size of the America economy, says SpaceX and Tesla founder Elon Musk, so the only way for the United States to remain the dominant military power is for the US to rapidly innovate.

“The foundation of war is economics,” Musk told an audience here in Orlando at the annual Air Force Association meeting today. “”In the absence of radical innovation, the US will be militarily second.”

Musk, who made his first fortune with Paypal, spoke on a panel with Air Force Lt. Gen. John Thompson, commander of Space and Missile Systems Center (SMC), about fostering innovation. The two were reprising their ‘fireside chat’ at the service’s Space Pitch Days held in San Francisco in November.

Musk explained that China “has a lot of smart, hardworking people that are going to do a lot of great things,” in spite of the country’s authoritarian political system.

Musk’s words echoed those of Will Roper, Air Force acquisition czar, who spoke earlier today. Roper, who has said that innovation is the next battlefield, said that ensuring rapid, ubiquitous machine-to-machine connectivity is critical to winning the 21st Century war.

“If we can’t move at digital speed, we’ve lost,” he said bluntly.

SpaceX, Roper said, is one of only three industry “unicorns” — startups that have morphed into profitable firms — that DoD investment has helped to foster. The other two are data management firm Palantir, and Anduril Industries, an artificial intelligence startup with a primary focus on the defense market.

“That is the saddest thing I can say — only three,” Roper bemoaned.

For this reason, he said, the Air Force is putting a lot of emphasis on Air Force Ventures (AFVentures) which as I reported on Tuesday is pumping increased investment into commercial startups to try to drive innovative products that also bring military benefits. Over the past 18 months, Roper said, the Air Force has invested $360 million in commercial startups, that it has “turned into a billion” dollars via harnessing matching funds from private venture capital firms.

Over the next year, Roper told reporters afterwards, he hopes to see AFVentures pump more than $500 million into the dual-use industry ecosystem.

Musk, for his part, said the key to successful innovation is putting into place an incentive structure that rewards innovators, does not punish those who try to innovate and fail, but that does punish those who fail to try.

Musk said he believes the hardest part of innovation is not coming up with the idea or the technology– it is producing it at scale. One way of ensuring that an innovative product can be massed produced is to build the production line concurrently as you develop the design, he explained. This allows you to figure out what pieces of the product are easy to mass produce and what pieces are either really hard, or impossible, to build at scale. This knowledge, then, feeds back into the next design iteration until you reach a final design that is new and different, but also easy to mass produce.

The report to Congress will not include “the full and total and complete bounds of the last dotted i and crossed t of every specific aspect” of how the Air Force will manage space acquisition, Thompson said.

This is what SpaceX did, for example, with its Starlink constellation, designed to create a space-based Internet using massive numbers (up to 30,000) of small satellites in Low Earth Orbit.

The Air Force is experimenting with Starlink under Air Force Research Laboratory’s Global Lightning program. under the exercises Roper has stood up to test out technologies related to the Advanced Battle Management System (ABMS) that is intended to enable Joint All Domain Command and Control (JADC2).

Asked by Thompson what he sees as the future of air warfare, Musk hesitated slightly before saying bluntly that the “fighter jet era has passed.” Instead, he said, the “really dangerous” future is “autonomous drone warfare.” He rushed to explain that this isn’t a future he wants, and called on the military to maintain “human in the loop” control over drones that were targeting anything but other drones.

Finally, Musk said that the “holy grail” of space the is full reusability of future rockets. While SpaceX’s Falcon 9 is partially reusable, the company’s goal is to build a fully reusable rocket — working under a program it calls Grasshopper. Such a rocket is key to enabling Musk’s long-standing dream of colonizing Mars, but he also argued that it is important for future US “leadership in space.”