During an almost hour-long press conference at the Pentagon this morning, the DoD’s top acquisition official, Ellen Lord, often struggled to answer questions over what segments of the defense industry could be put into action producing things like ventilators and masks, which are in short supply at hospitals across the country. 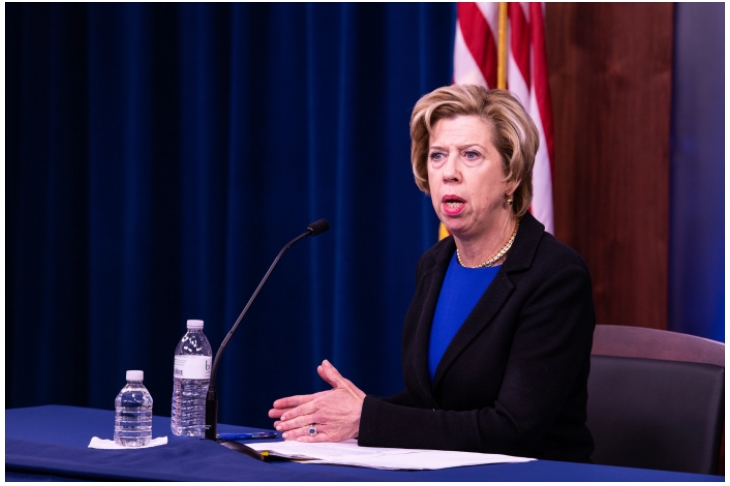 Undersecretary of Defense for Acquisition and Sustainment, Ellen Lord at the Pentagon.

[This story has been updated] PENTAGON: Military officials expect to see “significant” help for the defense industry in the $2 trillion relief bill currently being hashed out in Congress to steady the teetering national economy.

The DoD’s chief acquisition official, Ellen Lord, said she spent the weekend talking to lawmakers and White House officials about how much of that package might go to defense contractors, but until the bill sees a vote, “we are not sure exactly what the numbers are that are going to go into the final bill. But they will be significant.”

A document produced by the Senate Appropriations committee obtained by Breaking Defense reveals some of the contours of that deal, including a proposed $1.5 billion for fund that would allow Pentagon leadership to move hundreds of millions into the defense industry very quickly.

The money slated to be included in the Defense Working Capital fund includes $475 million each for the Air Force and Navy, and $500 million for a general Pentagon fund.

“You can use the fund for a variety of purposes,” said Andrew Hunter, director of the Defense-Industrial Initiatives Group at Center for Strategic and International Studies. “The primary effort has been to operate business functions like depots and some Navy shipyards,” he said, but the fund’s main attraction is that “it’s very flexible so you could do procurement activity, O&M activity, and in theory you can do R&D activity, it’s easy to move money into the fund.”

That kind of flexibility would allow the Pentagon to shore up small defense-related businesses at risk of going under if the national emergency continues to worsen over the next several weeks.

While that money can move fast, that kind of speed raises concerns over how and where it is spent. To keep tabs on that spending, lawmakers are also including $20 million for the Pentagon’s Inspector General to conduct oversight on how that cash is spent.

Some of the funding will also likely make its way to programs the Pentagon is pushing to ensure that small defense contractors do not have to rely on foreign sources of funding to stay afloat as supply chains are disrupted by COVID-19 related shutdowns.

During an almost hour-long press conference at the Pentagon this morning, Lord at times struggled to answer questions over what segments of the defense industry could be put into action producing things like ventilators and masks, which are in short supply at medical facilities across the country.

Lord has set up two separate task forces to work with the defense industry as well as the Federal Emergency Management Agency to assess needs, and “we will strive to do everything we can…but I have no data to address that now.”

The deeper coordination between the Pentagon and FEMA started this weekend after the Trump administration decided on Friday to have FEMA lead interagency efforts. “They have to give us the demand signal,” Lord said of FEMA. “Once we get clarity on the demand signal, we will execute.”

The Pentagon has already used the Defense Production Act to hash out an initial contract for protective masks from five companies and is working to establish other joint ventures for critical and severely limited items like ventilators and respirators. Lord was unwilling to share any details.

The United States and the United Arab Emirates held a large exercise, Native Fury, on Monday with troops from both countries operating side by side at Al Hamra Military Base. They practiced clearing and taking a Middle East city with 4,000 U.S. troops from the Army, Marines and Navy.

“I just want to say that we are working very hard to make sure that we have a system to process all of this, I understand the concern with not having many numbers here, we didn’t come this morning planning on giving numbers,” Lord said when pressed repeatedly for more information.

Questions have been raised why the DoD only started coordinating with other agencies and reaching out directly to the defense industry on Friday, six weeks after Defense Secretary Mark Esper approved an order directing geographic combatant commanders to initiate pandemic plans, including ordering commanders to prepare for widespread outbreaks and confining service members with a history of travel to China. That order went out on Feb. 1.

Lord conceded that “we have an enormous amount of disaggregated activity, great activity, going on,” but was unable to provide much detail. Over the past several weeks, there have been varying efforts throughout the individual armed services and federal agencies, but “what you’re just hearing now is that it is an all-of-government effort being coordinated in one place,” she said. “We just started standing up capability on Friday.”

The United States currently has more than 60,000 confirmed cases of COVID-19, and more than 700 deaths are attributed to the virus. Those numbers are expected to increase dramatically in coming days and weeks as tests become more widely available and the exponential increase in cases continues. Medical experts have argued that the federal government was slow to mobilize to meet the crisis, leading to weeks of test kits not being available. At the start of March, thanks to the absence of testing available, only 70 cases had been reported across the country.

The Navy has been unable to get test kits out to ships at sea, and Tuesday, the service acknowledged that three sailors aboard the USS Roosevelt aircraft carrier, which is home to over 5,000 sailors.

I asked Lt. Rachel McMarr, a Pacific Fleet spokesperson, how many other sailors are being evaluated for the virus. “To protect operational security, we are not disclosing any specific numbers of Sailors in quarantine, but I can tell you that Sailors identified as having been in close contact with the Sailors who tested positive are being tested as well,” she said in an emailed statement late Tuesday evening.