By: David B. Larter 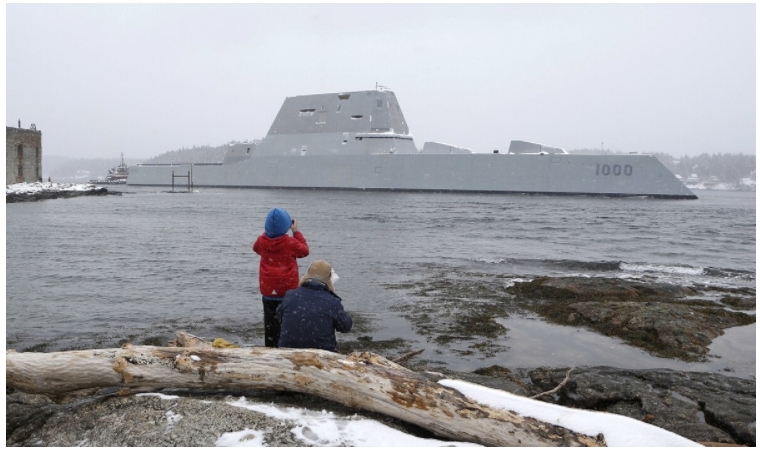 WASHINGTON — The U.S. Navy’s first stealth destroyer, the Zumwalt, is on track to have its combat system installation completed and delivered within days, a source with knowledge of the program told Defense News.

It’s the end of a long journey for the ship that was commissioned in 2016 without a working combat system but is finally preparing to fully enter service. The ship was slated to have its installation completed in March, and the service is still on track to deliver on time, the source said.

In November 2016, BAE Systems was awarded a $192 million contract to deliver the combat system for Zumwalt and its sister ship the Michael Monsoor.

The DDG-1000 program has been beleaguered by cost overruns and changes over the years. The ship’s original raison d’être, the Advanced Gun System, has been all but abandoned by the Navy as it has changed from a naval gunfire support platform for landing Marines to now a surface strike platform.

As the Navy truncated the buy of Zumwalt-class destroyers from 28 ships, to seven, and finally to three, the rounds for the guns became steadily more expensive, making the projectile — Long Range Land Attack Projectile — too valuable to fire. The Navy has yet to identify a replacement.

Instead, the ship has been predesignated a ship killer, with Maritime Strike Tomahawk and SM-6 integrated into its combat system.

The Navy has stood up the Surface Development Squadron to help it integrate new technologies into the fleet, such as unmanned surface vessels and the DDG-1000.

The Michael Monsoor should have its combat system activation done by the second quarter of 2020, according to a Naval Sea Systems Command program brief from January. The third and final ship of the class, the Lyndon B. Johnson, is still under construction at Bath Iron Works in Maine and should be delivered by December 2020.

The ship will then transit to San Diego, California, and have its combat system installed like its sister ships.