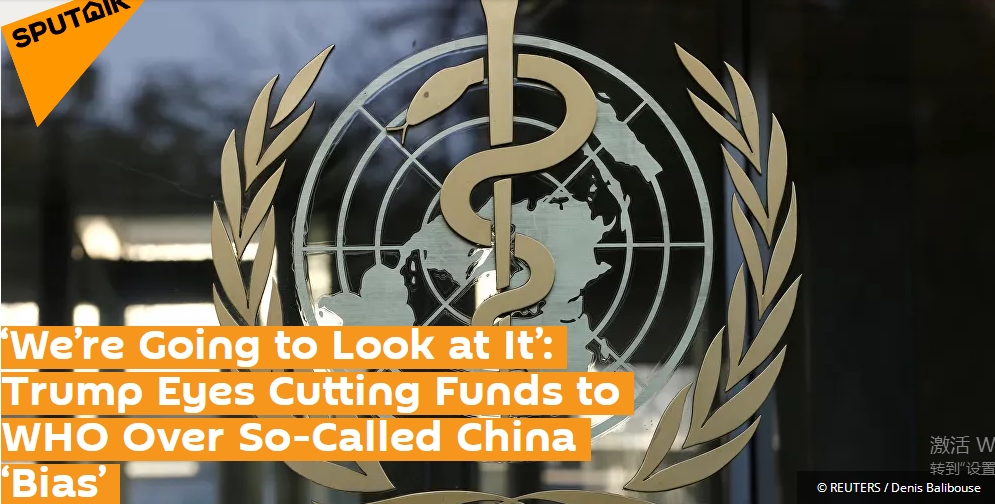 US President Donald Trump said on Tuesday that his administration was considering cutting its payments to the World Health Organization (WHO) budget, accusing the United Nations agency of pro-China bias.

During a press conference Tuesday, Trump said the US would weigh refusing to help fund the WHO because it is “China-centric.”

“They’ve been wrong about a lot of things … they seem to be China-centric … we’re going to look into that,” Trump said, echoing his comments on Twitter earlier in the day.

It’s a message that’s been picked up by other figures close to the Trump administration, including Trump’s former national security adviser, John Bolton, who called the WHO an “accomplice” of China.

The @WHO is an accomplice to China’s massive coverup of Covid19. That’s why I support efforts by @marcorubio & @tedcruz pushing for resignation of WHO director general. He misled the world by blindly trusting a communist regime intent on deception.

​​The US is by far the largest contributor to the WHO’s budget, paying the agency between $212 and $513 million per year.

Trump said the federal stockpile of ventilators had 8,675 machines in it, and that roughly 110,000 more would soon be delivered.

Trump also said that some states, including Washington and California, were giving back lent ventilators they did not need, and that the United Kingdom had requested at least 200 machines.

For those with particularly severe cases of the COVID-19 novel coronavirus, ventilators capable of supplying enriched oxygen directly to the lungs can be the difference between life and death.

The president also noted that the US Army Corps of Engineers was rapidly building hospital facilities, with the aim of providing approximately 15,000 hospital beds in areas of high need.

“We’re going to beat it … with the grit and the heart for which this country is known,” Trump told reporters at the White House. There are at least 380,000 cases of the coronavirus in the US, and more than 11,000 people have died.

“This will be a very painful week,” Trump said, but noted that there are signs “that our strategy is totally working. Every American has a role to play in winning this war, and we’re going to be winning it powerfully.”

Trump told reporters he had not seen the January warning note from Peter Navarro, one of his top economic advisers, about the potentially disastrous fallout of the COVID-19 virus spreading across the US.

“I didn’t see them, I didn’t look for them either. That was about the same time that I closed it down [trips to China]. Nobody said it [the pandemic] was going to happen. Interestingly the WHO was not in favor of us closing it down,” Trump said, adding that if he hadn’t barred travel from China so early, the US would have lost “hundreds of thousands of lives.”

Asked if he still had confidence in Navarro, Trump said, “Of course. Peter is a smart guy, a good guy.”

US Vice President Mike Pence, who heads the president’s coronavirus task force, reported on his efforts to support the health care industry as well as other areas of the economy, such as food supplies.

“We continue to see evidence of stabilization in some areas” with most significant outbreaks, such as Denver, Colorado; New York City; and Connecticut, Pence said, noting that New York Governor Andrew Cuomo had reported earlier in the day that hospital admissions have continued to decline.

However, he noted that despite their efforts, increasing incidents of worker absenteeism in factories were forcing manufacturing plants to continue to close.

“Understand that you are vital and you are giving a great service to the people of the United States of America,” Pence said about food industry workers.