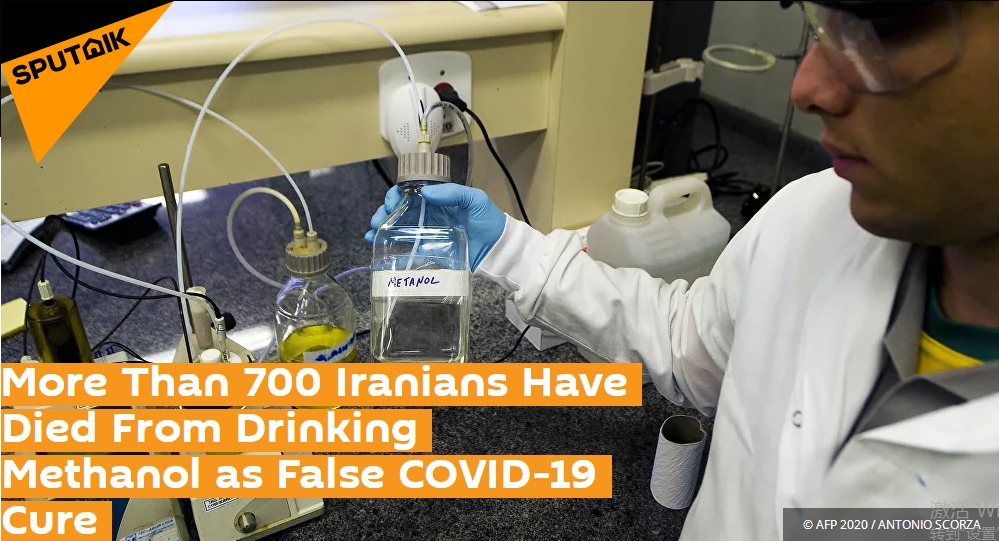 As the toxic myth that methanol can cure one of COVID-19 circulates in Iran, people continue to die from poisoning. A Tehran official said on Monday the number of poisoning deaths had reached 700.

Citing a report by the national coroner’s authority, the Associated Press reported on Monday that methanol poisoning had killed 728 Iranians between February 20 and April 7 – more than 10 times the typical number who die in this manner annually in Iran.

The explosion in poisonings has come about amid the country’s COVID-19 outbreak, which has infected more than 91,000 people in Iran and killed more than 5,000. Iran was among the first hit by the outbreak after the virus began spreading beyond Wuhan, where it originated.

Amid the dearth of information about even symptomatic treatment of the deadly respiratory disease, rumors swirled on Iranian social media as people pushed snake-oil cures, including drinking whiskey, honey and the deadliest rumor, methanol, a type of alcohol extremely poisonous to humans.

“It is rumored that alcohol can wash and sanitize the digestive system,” Dr. Javad Amini Saman in the western Iranian city of Kermanshah told AP in late March, when more than 300 had already died by poisoning. “That is very wrong.”

Iranian Health Ministry spokesman Kianoush Jahanpour said on state television Monday that 525 people had died and 5,011 had been poisoned overall, 90 of whom had suffered damage to their eyesight as a result. Hossein Hassanian, an adviser to the Health Ministry, explained to AP on Monday that the difference in numbers was because some 200 people had died outside hospitals.

As a product synthesized from oil, methanol is produced in large quantities as an industrial material for export by Iran. According to a 2017 report prior to the reintroduction of US sanctions against Iran’s petrochemical exports, the country produced 5 million tons of methanol per year, constituting 10% of global methanol production. Iranian manufacturers are required to add dye to methanol to distinguish it from drinkable alcohol, even though consuming even that is banned for Iran’s mostly-Muslim population.

According to US National Institutes of Health, a potentially lethal dose of methanol is between 30 and 240 milliliters, or 1 gram per kilogram, with permanent visual damage occurring even at the lowest levels of toxicity. Therapeutic treatments can include fomepizole, ethanol and dialysis.

However, Iran isn’t alone in trying to combat false cures for the pandemic illness. In Israel, rumored cures have included a hot tea of lemon juice and baking soda, while in the US, media personalities like InfoWars chief Alex Jones and televangelist Jim Bakkerhave been ordered to stop pushing fake COVID-19 cures, and even US President Donald Trump gave questionable advice by suggesting injections of sunlight and disinfectants should be tested as therapeutics.