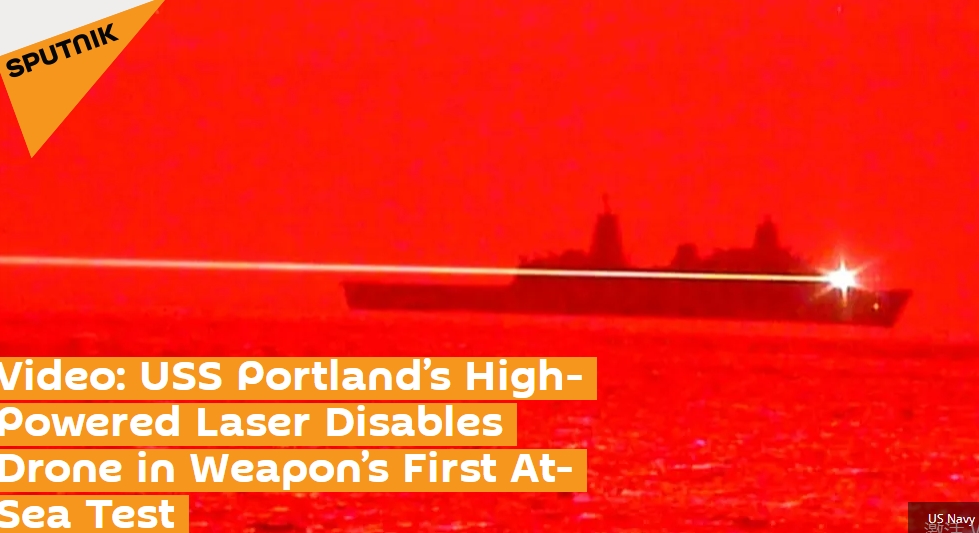 The Navy’s Pacific Fleet announced Friday that its amphibious transport dock USS Portland (LPD 27) successfully disabled a UAV during the first at-sea test of the LWSD MK 2 MOD 0 on May 16.

“By conducting advanced at sea tests against UAVs and small crafts, we will gain valuable information on the capabilities of the Solid State Laser Weapons System Demonstrator against potential threats,” noted Capt. Karrey Sanders, commanding officer of the Portland.

Official Navy footage uploaded to YouTube by USNI News shows the May 16 demonstration in question.

The LWSD, developed by US defense contractor Northrop Grumman and the Office of Naval Research, was lauded in the release as “the first system-level implementation of a high-energy class solid-state laser.”

While the Navy and Northrop Grumman have remained tight-lipped about the system until now, The Drive previously highlighted the Navy’s installation of the LWSD in December 2019 after photos emerged on social media showing an upgraded USS Portland.

The outlet’s December report detailed that the Portland’s demonstration – delayed after being originally scheduled for the fourth quarter of fiscal year 2019 – would test a number of components for the weapons system, including its cooling equipment, power generation and beam director.

“The US Navy has been developing directed-energy weapons (DEWs), to include lasers, since the 1960s,” noted the Pacific Fleet’s Friday release. “The Navy’s development of DEWs like the LWSD, provide immediate warfighter benefits and provide the commander increased decision space and response options.”

Sanders asserted that the advanced capabilities provided by the LWSD assist in the service’s redefinition of war at sea.