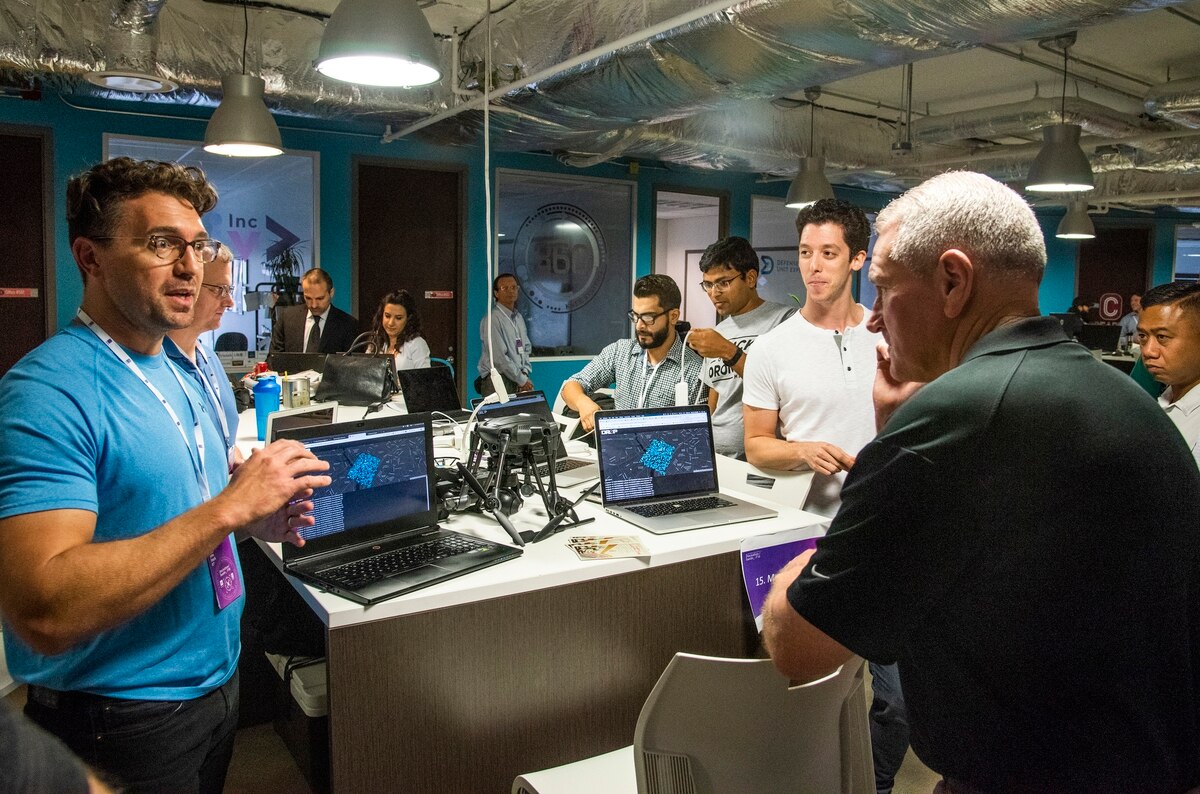 Gen. John Murray, right, the head of Army Futures Command, listens to innovators during a visit to Capital Factory in Austin, Texas, on Sept. 30, 2018. (Courtesy of the U.S. Army)

WASHINGTON — With artificial intelligence expected to form the backbone of the U.S. military in the coming decades, the Army is launching a trio of new efforts to ensure it doesn’t get left behind, according to the head of Army Futures Command.

While speaking at an event Wednesday hosted by the Defense Writers Group, Gen. Mike Murray was asked about areas that need more attention as his command works to modernize the force.

Murray pointed to a change in how the service does long-term planning, as well as two personnel efforts that could pay off in the long run.

The first is something Murray has dubbed “Team Ignite,” which he described as “ad hoc, right now,” with a hope to formalize the process in the future. In essence, this means bringing in the teams that write the concept of operations for the military and having them work next to the technologists driving research and development efforts so that everything is incorporated early.

“It has occurred to me for a long time that when we prepare concepts about how we will fight in the future, they are usually not informed by scientists and what is potentially out there in terms of technology,” Murray said. “And when we invest in technologies, rarely do we consult the concept writers to understand what type of technology will fundamentally change the way we fight in the future.”

In Murray’s vision, this means soon there will be “a concept writer saying, ‘If only I could [do something we can’t do now], this would fundamentally change the way we would fight,’ and a scientist or technologist saying, ‘Well, actually we can, you know, another 10-15 years,’ and then vice versa,” he said. “Really using that to drive where we’re investing our science and technology dollars, so that in 10 or 15 years we actually can fundamentally change the way we’re going to fight.”

The Futures Command chief also laid out two new efforts to seed understanding of AI throughout the force, saying that “a key component of the Army moving more and more into the area of artificial intelligence is the talent that we’re going to need in the formation to do that.”

Murray described a ”recently approved” masters program to be run through Carnegie Mellon University, focusing on bringing in “young officers, noncommissioned officers and warrant officers” to teach them about artificial intelligence. The course features four to five months of actual learning in the classroom, followed by five or six months working for the Army’s AI Task Force. After that, the officers are sent back the force, bringing with them their AI experience.

Additionally, Murray is in the early stages of standing up what he described as a “software factory” to try and identify individual service members who have some computer skills, pull them out of their normal rotations and give them training on “basic coding skills” before sending them back to the force.