US Navy embraces robot ships, but some unresolved issues are holding them back 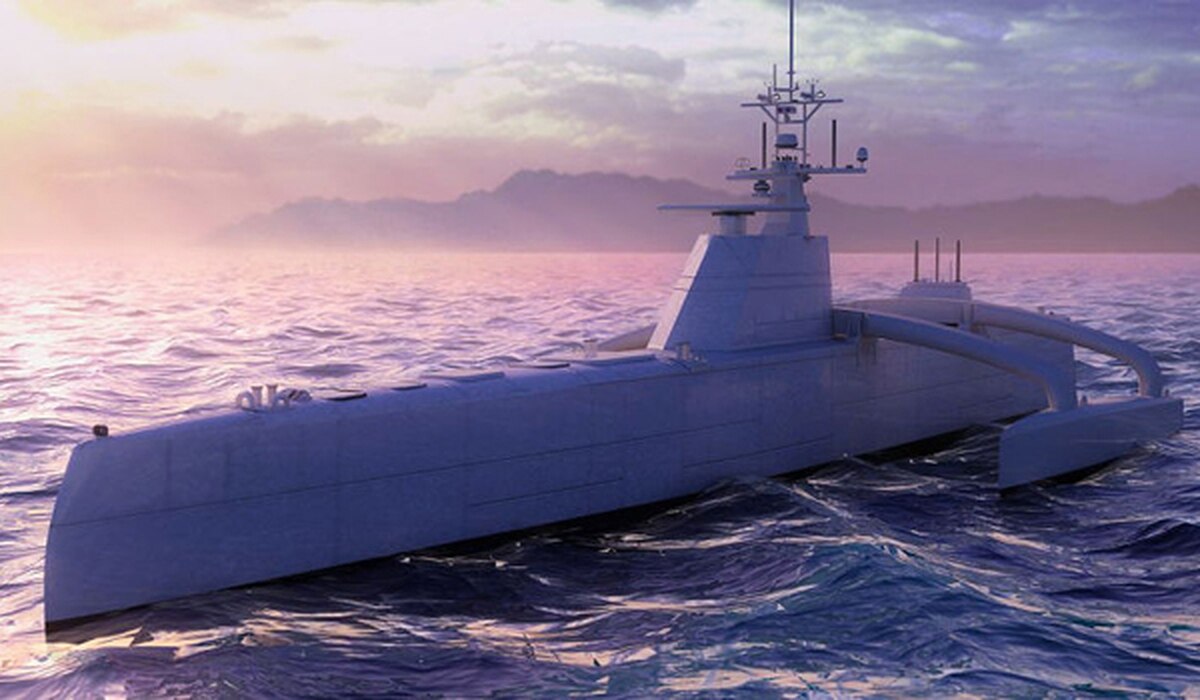 WASHINGTON — The U.S. military is banking on unmanned surface and subsurface vessels to boost its capacity in the face of a tsunami of Chinese naval spending. But before it can field the systems, it must answer some basic questions.

How will these systems deploy? How will they be supported overseas? Who will support them? Can the systems be made sufficiently reliable to operate alone and unafraid on the open ocean for weeks at a time? Will the systems be able to communicate in denied environments?

As the Navy goes all-in on its unmanned future, with billions of dollars of investments planed, how the service answers those questions will be crucial to the success or failure of its unmanned pivot.

Many of those issues fall to the Navy’s program manager for unmanned maritime systems, Capt. Pete Small. As the Navy puzzles out some very basic questions, it must also ponder some big organizational changes to maximize the potential of the platforms once they arrive.

“Our infrastructure now is highly optimized around large, very capable, highly manned warships,” Small said at the C4ISRNET Conference in May. “We spend a lot of time and effort preparing them for deployment, and we deploy them overseas for months at a time. They are almost perfectly reliable: We generally send them on a mission, they do it and come back almost without fail.

That question is critical because it will affect the requirements for how the systems are designed at the outset. In the case of the medium and large unmanned surface vessels under development, just how big and how rugged they need to be would depend on how the Navy plans to use them.

“All the scenarios we’re discussing are far forward,” Small said. “Far from the shores of the continental United States. So there is absolutely a transit somewhere — a long transit — to get these platforms where they need to be. We’ve got to come through that in a range of ways.

Making these platforms cost-effective is almost the entire point of their development, but questions such as “Should we design the vessel to be able to make an Atlantic or Pacific crossing?” can mean a big price difference.

“With a medium USV, we’re kind of on the edge of whether it’s big enough to cross the ocean by itself, and we’re learning, you know, how big does it need [to be],” Small said.

“You may be able to make it smaller and cheaper to get it to do the job you want it to do ultimately, but if it has to cross the ocean to get there, that might be the overall driving requirement, not the end mission requirement. If you are going to heavy-lift them and bring them over in bulk, well that’s a new concept and we have to figure out how we’re going to do that,” he added.

“What ships are we going to use to do that? Where do we operate from overseas? There’s a range of options in each case, but in general we’re going to have to transition from a system more optimized around our manned fleet infrastructure to a more distributed mix of large, highly manned platforms to smaller unmanned platforms.”

The introduction of entirely new platforms that operate without humans onboard mean that the Navy must think about how to support them downrange, Small said.

“We’re going to need to talk about things like tenders, heavy lift ships and forward-operating bases, things like that,” he said.

The idea of an unmanned vessel tender for the medium USV, which the Navy intends to use as a far-forward distributed sensor, is likely the best solution, said Bryan Clark, a senior fellow at the Hudson Institute and a retired submarine officer.

“I think it’s likely that they’ll be heavy-lifted into the theater, not because they can’t make it themselves but because in general it would be less wear and tear on the vessels,” he said. “You want that support to be relocatable as opposed to a group of guys working out of a building ashore. The whole purpose of them is to be flexible; and because they’re small, that would, in theory, give you lots of options as to remote locations you could operate from.”

The tender could be adapted from an existing platform in the sealift fleet for now, and ultimately procured as new later, Clark said, adding that the ship would need cranes and a platform near the waterline to support the medium USV and perhaps the planned extra-large unmanned undersea vehicle as well.

Additionally, the vessels should be stationed where the Navy has long-standing relationships, like Singapore, Souda Bay, Greece, Britain and the like, as well as where they are likely to operate.

The Marine Corps’ transition from a heavy force concentrated on large amphibious ships to a lighter force distributed around smaller ships and lighter amphibs may free up some platforms for porting unmanned vessels around the globe.

“As we change the deployment schemes for amphibious ships, that may afford the opportunity to have amphibs with well decks that are not full of Marines’ equipment but with unmanned vessels,” he said.

For Small, the questions that are most immediate are how to make the systems dependable.

“We plan to send these systems out to sailors who are at the forefront of the fight, and we need these systems to work every time and be reliable,” he said. “So, reliability is a fundamental issue associated with autonomous vehicles.”

Questions have been raised about things as basic as whether the Navy can get a marine diesel engine to run for days and potentially weeks without being touched by humans. But Small said that’s not what he spends a lot of time worrying about.

“For me, I think there is plenty of technology there and it will get better. I’m less concerned with, ‘Will the engine run long enough?’ and more concerned with the reliability of the system as a whole,” he said. “The autonomy running that vessel is a key aspect of the overall reliability of the system. So there’s a code and software aspect to this, but there is also the interface between that code and the hull, mechanical and electrical systems that we have on ships.”

Perhaps unsurprisingly, it is the human ability to detect subtle changes in the equipment they operate that is the toughest to replicate, Small said.

“It’s about self-awareness and the ability to self-diagnose problems and changing conditions associated with that equipment and react to those changing conditions,” he explained. “That’s either by alerting an operator or having an autonomous response that allows the mission to continue.

“A sailor would sense a vibration; a sailor would hear abnormal noise; a sailor would see something getting warmer, do the diagnostics and take actions. … There’s as strong a relationship between that and the overall reliability of those physical systems themselves.”