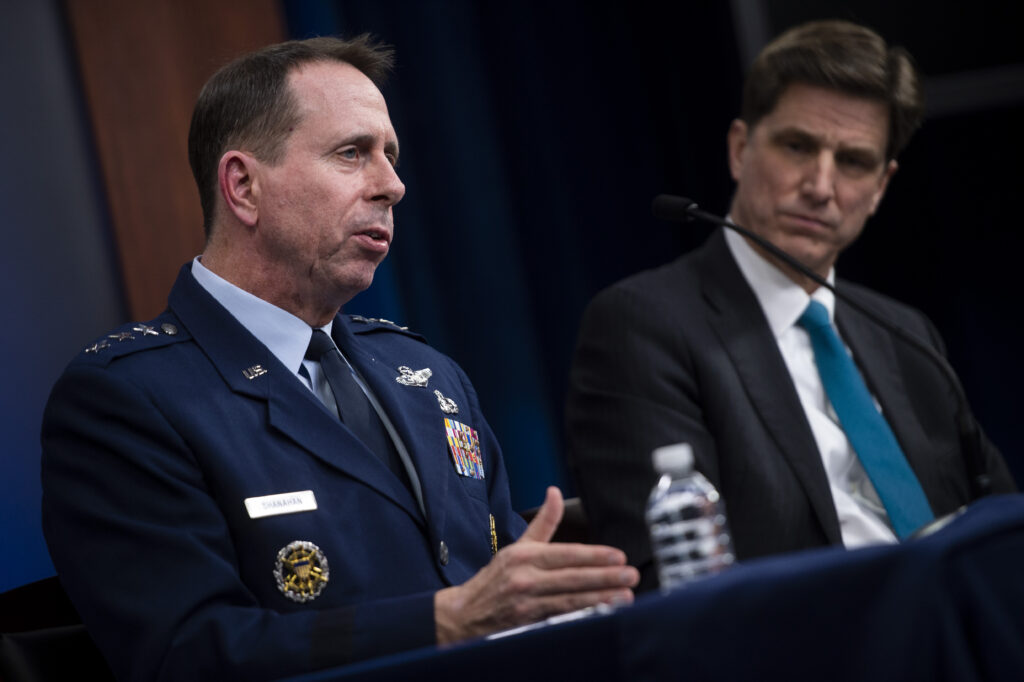 WASHINGTON: The Air Force should seriously consider standing up a new major command to combine ISR, electronic warfare, and cyber operations for both the air and space domains, suggested the outgoing director of the Pentagon’s Joint AI Center, Lt. Gen. Jack Shanahan.

Such a combined major command, he told the Mitchell Institute this afternoon, would be the “logical next step” following the standup last March of the 16th Air Force, which merged the the 24th Air Force, the Air Force piece of US Cyber Command (CYBERCOM), and the 25th Air Force, which provided mobile integrated intelligence, surveillance and reconnaissance to all of the component commands. The 16th Air Force is headquartered in San Antonio and led by Lt. Gen. Timothy Haugh.

Shanahan called the creation of the 16th Air Force the service’s “biggest transformation” over the last few years, because “it puts all the non-kinetic capabilities together in a single numbered Air Force Command.”

“Now, I think you could logically ask, the next step is …  maybe a major command status?” he added. “I wouldn’t pretend to answer for the chief, or the secretary as to what they what they envisioned five years down the road, but this gets it started.”

Such a major functional command, he said, should encompass all the service’s non-kinetic operations in the electro-magnetic spectrum: “flying ISR; as well as SIGNINT — space-based and all the other forms that we get Intel off of — plus information operations and military information operations (or MISO); plus EW; plus cyber —  offensive cyber, defensive cyber, cyber for the joint force, cyber for the CFACC [Combined Forces Air Component Commander] or the [Joint Functional Component Commander].”

One industry observer said the creation of new command would require some mulling, but noted that it would raise questions about how it would interact with CYBERCOM. Another insider said it also raises the question of why such a command would be in the Air Force chain, as opposed to being aligned with Space Force and Space Command. (Breaking D readers also may recall that there already is an internal debate ongoingabout how to fit the spy satellite responsibilities of the National Reconnaissance Office with the space-based ISR responsibilities of Space Command and the Space Force.)

In other words, establishment of a new combined MAJCOM would create problems as cyber and space-based ISR are currently seen as separate missions within the joint force as well as within the Air Force.

But Shanahan, who directs DoD’s Joint Artificial Intelligence Center, is well known as a man of big, futuristic ideas. While he’s never been shy about speaking his mind, he’s now weeks from retirement and able to speak more freely than ever.

Shanahan’s been working to figure out how to infuse autonomy and AI techniques into the weapon systems and operations of all the services. This includes working closely with his home service, the Air Force, on the autonomous and AI systems necessary to enable the Advanced Battle Management System (ABMS) family of system being designed to serve as a military Internet of Things (IoT).

ABMS, as Breaking D readers are well aware, is the Air Force’s front-line contribution to the US military’s high priority Joint All Domain Command and Control (JADC2) concept. Indeed, as Sydney reported, the JAIC is now turning to ABMS’s cloudONE as a stop-gap until the highly-politicized legal brouhaha surrounding DoD’s overarching cloud computing effort, JEDI, is resolved.

Shanahan said that JAIC is also working closely with Air Force Research Laboratory (AFRL) how humans and machines can work together to create autonomous “smaller, cheaper, more disposable” systems that eventually will move the balance toward AI run systems that need almost no human intervention.

As Breaking D readers are well aware, Air Force acquisition czar Will Roper is a big champion of autonomous systems and is looking at how to integrate unmanned air vehicles with fighter jets under the Next Generation Air Dominance (NGAD) program.

“Right now, it’s big ‘H’ human, and in a lot of cases, small ‘m’ machine,” he explained. “That will begin to rebalance so it’s smaller ‘h’ bigger ‘M’. It’s the idea of human machines working together and this is where some of our relationship with AFRL in the Air Force have been very, very valuable.”

For example, Shanahan said, he is talking to Steven “Cap” Rogers, head of autonomy at AFRL, about his “bold, bold” idea to put together a demo pitting a drone against a crewed aircraft in an air-to-air dogfight. Rogers, he said, wants to field the demonstration next year for the Air Force’s annual anniversary of Billy Mitchell’s landmark bombing of the “unsinkable” captured German battleship Ostfriesland. That bombing, on on July 27, 1922, is widely considered the first demonstration of the value of military air power.

AFRL confirmed the effort is underway but couldn’t provide any details before press time.