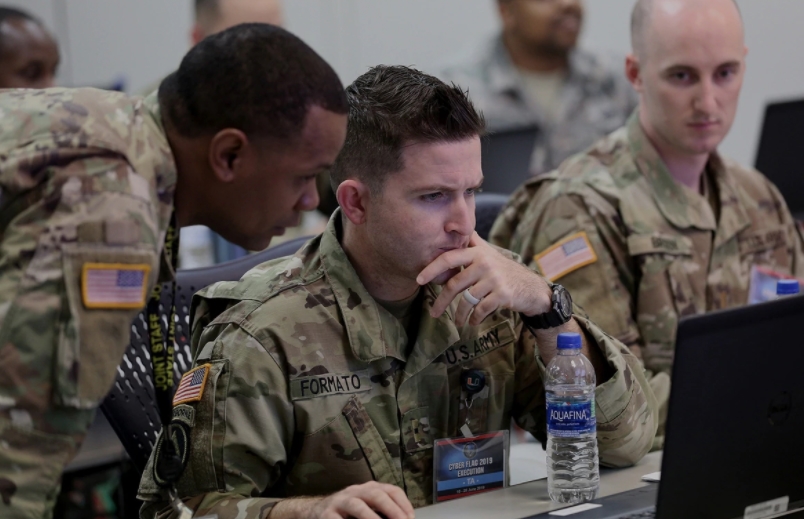 WASHINGTON — The Pentagon’s virtual cyber-training platform has been successfully integrated with operational tools that will be used during missions, according to Col. Tanya Trout, the outgoing director of the Joint Cyber Training Enterprise.

The Persistent Cyber Training Environment, or PCTE, is an online client that allows U.S. Cyber Command’s warriors to log on from anywhere in the world to conduct individual or collective cyber training as well as mission rehearsal on par with the National Training Center, which did not previously exist for cyber warriors. The Army runs the program on behalf of the joint cyber force and Cyber Command.

Given the inherent need for such a platform, U.S. Cyber Command and the subordinate service cyber components have actively sought the technology. The program office in charge of the effort delivered the first version in February. Prior to that, the office was creating prototypes to incrementally test the system.

After the platform was first used in a large-scale, tier-one exercise in June, it joined an integration pilot program in July with the program offices of the Unified Platform system and the Joint Cyber Command and Control system, according to Trout, who spoke during a virtual industry day for PCTE on Aug. 19.

Trout’s Joint Cyber Training Enterprise is the nonmaterial component to PCTE at Cyber Command. It coordinates training of personnel through the platform.

The Unified Platform system will consolidate and standardize the variety of big-data tools used by Cyber Command and its subordinate commands to allow forces to more easily share information, build common tools, and conduct mission planning and analysis. Joint Cyber Command and Control, or JCC2, currently in its nascent and amorphous stages, will help command cyber forces and plan their missions. Both programs are managed by the Air Force on behalf of Cyber Command and the joint cyber force.

Unified Platform and JCC2, as well as PCTE, are components of the Joint Cyber Warfighting Architecture. JCWA includes five capability categories and guides their development priorities.

“This integration allowed for execution of small team tactics while performing active hunt of advanced persistent threat within a post-compromised range environment,” she said.

Trout added that the pilot demonstrated PCTE’s ability to integrate existing operational tools into training scenarios. “PCTE will integrate and be interoperable with these other five elements [of the JCWA] to enable teams to train and rehearse using available JCWA operational tools and capabilities, [which] gives us really the ability to train as we fight,” she said.

Due to the ongoing pandemic and the need to practice social distancing while maintaining readiness, Trout said, there has been increased demand for PCTE. From March to May, the number of new accounts for PCTE doubled.

This training tool could be the answer to stop mass cyberattacks

At air bases across Europe, networks are under attack. But cyber operators from around the world are on the case.

Trout also explained that PCTE — which, since its delivery to Cyber Command, is used daily by the cyber mission force — participated in another pilot focused on mission rehearsal. Members of the Cyber National Mission Force, one of Cyber Command’s elite units aligned against specific threat actors and charged with defending the nation in cyberspace, were able to expand their mission rehearsal scope, scale and fidelity in a virtualized adversarial network, which will help determine future requirements, she said.

Lt. Gen. Stephen Fogarty, commander of Army Cyber Command, told the industry day audience that the advantage the virtual cyber-training environment has over the National Training Center is its ability to replicate an actual opponent.

The mission rehearsal capability allows users to input prior operations, such as those used against the Islamic State group, or to train against or upload malware discovered in operations.