The future US Navy carrier air wing will be effective at extended ranges, admiral says 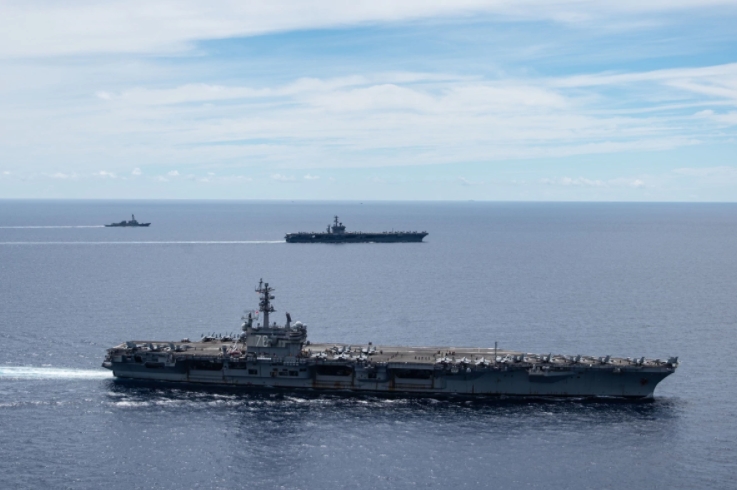 WASHINGTON – The U.S. Navy’s aircraft carriers will be prepared to fight at extended ranges well into the future, the service’s director of air warfare said Saturday.

Rear Adm. Greg Harris told a virtual audience that a recent force structure study of the carrier air wing – the aircraft and associated personnel assigned to aircraft carriers – and that a combinations of new systems and new weapons coming online make the carrier relevant even as potential adversaries invest in long-range weapons to keep the Navy’s powerful strike arm at bay.

The addition of the MQ-25 Stingray, which an unmanned tanker drone for refueling aircraft being developed by Boeing, helps in that endeavor, as will a next-generation fighter Harris said.

“The MQ-25 adds range which adds lethality to the carrier strike group,” he said. “When you add that additional range to 4th and 5th Gen[eration] fighters; when you add that range to the range we’re looking at for F/A-XX or next-generation air dominance family of systems; if you add that to the long-range weapons that we are currently procuring and look to procure in the future: we have an ability to strike at range and with volume and tempo.”

Harris’s comments come three weeks after China staged a high-profile test of its DF-26B and a DF-21D anti-ship ballistic missiles fired into the South China Sea, an apparent warning to the United States that continues to regularly operate aircraft carriers in the region despite Chinese protests. In July, the Navy sent the Nimitz and Reagan to sail together in the South China Sea in a two-carrier show of force that China criticized as “stirring up trouble.”

Questions around the carrier’s relevance in the face of Chinese anti-ship missiles have persisted, though analysts and the Navy say that the air wing can be augmented to fight at the ranges necessary to keep the platform relevant.

A recent air wing study forced the service to challenge its assumptions about the range at which the air wing can fight, Harris said.

“We just finished a future naval force structure study that looked very specifically at the carrier air wing, and throughout that study the folks who were working with us challenged us to operate farther and farther away from the threat, with the assumption that threat systems were going to prevent us from being able to operate from inside certain ranges,” he said, adding that the outcome was that the Navy could make it work with changes planned and already in the pipeline.

“I’ll never stop saying it: the nuclear-powered aircraft carrier is one of the 11 most survivable airfields in the world,” Harris said, referring to the United States’ 11 aircraft carriers. “You put on top of that a flexible carrier air wing and supported by a carrier strike group and all the capabilities that are resident with our flight III DDGs and the rest of our systems, you have an amazing capability that is able to strike at range, at depth and with volume.”

The Navy has begun work on a new manned, long-range fighter program that should start entering service in the 2030s, USNI News reported in August.