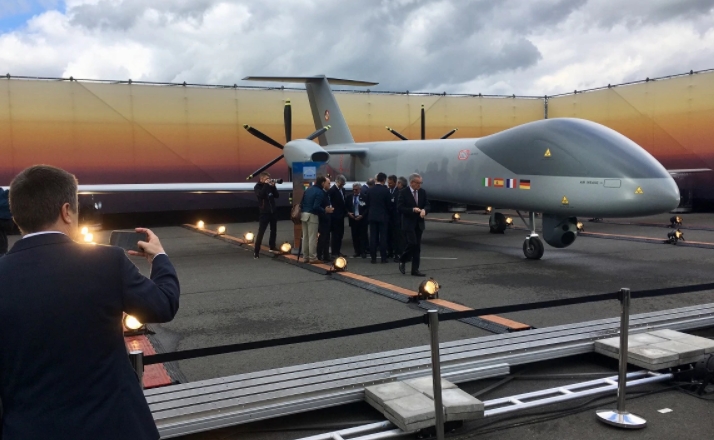 COLOGNE, Germany — The defense ministers of Germany and France have pushed for speedy progress in the Eurodrone program, urging member nations to initiate the aircraft’s development phase before the end of the year.

The high-level endorsement means a shot in the arm for a weapons program that has slipped under the radar since Airbus, Dassault and Leonardo unveiled a mock-up drone at the April 2018 Berlin Air Show.

While French Armed Forces Minister Florence Parly said she hopes to see the next phase begin by year’s end, her German counterpart, Annegret Kramp-Karrenbauer, expressed hope any outstanding issues, which mostly involve cost, could be resolved “in the next few weeks.”

The two leaders spoke at Manching, Germany, Airbus’ hub for the Eurodrone project and a company site for another key European program, the Future Combat Air System.

The drone program sets out to field the first new unmanned aircraft certified to fully integrate into civilian airspace, though European authorities have not yet finalized the requisite regulatory framework. Company officials hope that key design features of the drone, such as a propulsion system of two engines — one as a fallback, if necessary — will be conducive to passing future safety checks.

That means the technology could cut into the business strategy of American competitor General Atomics. The company aims to be the first to sell its drones, complete with automatic collision-avoidance kit, to Europeans.

Officials at the German Defence Ministry did not immediately return a request for comment on how soon the government plans to present a financing and contract strategy to lawmakers — a prerequisite for letting the effort proceed.

It remains to be seen if the weapons-capable Eurodrone, whose primary mission is intelligence gathering, will get wrapped up in Germany’s debate on the ethical aspects of arming aerial and ground robots.

Another program, the Israeli-made Heron TP drone, is still awaiting decision by Germany’s parliament, the Bundestag, on whether the government can proceed with installing weapons on the aircraft. The German military is using the drones to watch over deployed forces under a leasing agreement with Israel Aerospace Industries. They are operationally managed by Airbus.

It’s possible that the Heron TP armament decision will be presented to the Bundestag first, thus capping what a Defence Ministry official told Defense News will likely be a lengthy public meditation on drones and war.

But that sequence of approvals is not automatic, Airbus hopes.

Either way, time is of the essence for the Defence Ministry, with election years looming in Germany and France starting in 2021.

“It would be surprising if we had the Eurodrone first,” said Ulrike Franke, a London-based analyst with the European Council on Foreign Relations. “Because it would amount to a signal that the Heron TP decision had been needlessly stalled.”

Questions surrounding the program include whether it can provide enough utility beyond offerings already on the market, including American-made hardware, Franke said. Its success also depends on countries purchasing the future drone in sufficient quantities to get the envisioned benefits of greater European interoperability, she added.