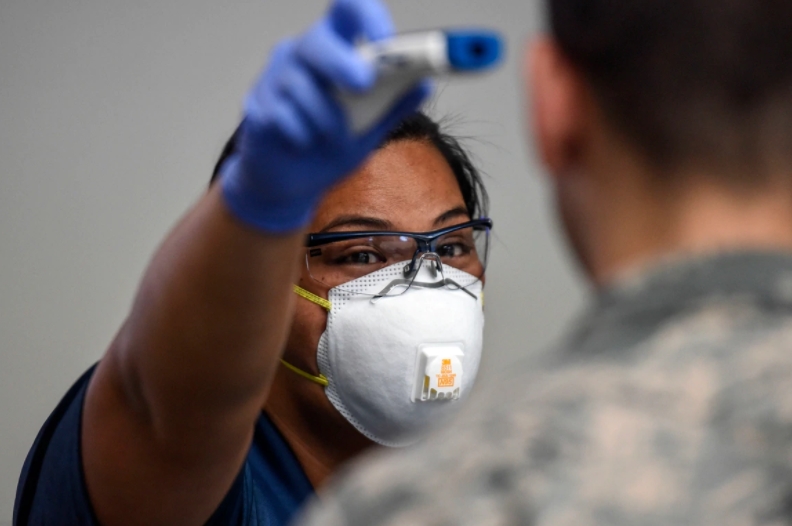 The project, from the Defense Innovation Unit, Defense Threat Reduction Agency (DTRA) and Philips Healthcare uses artificial intelligence to analyze biometric data to detect potential COVID-19 infections in asymptomatic and pre-symptomatic carriers and slow the spread of the virus.

The early-warning system prototype is part of the DoD’s Rapid Analysis of Threat Exposure (RATE) technology and has been used for COVID-19 detection for a dozen different cohorts of military and non-military personnel in clinic trials, according to a press release. The system can detect early, “sub-clinical” symptoms up to 48 hours before overt symptoms appear, Lt. Col. Jeff “Mach” Schneider, a DIU program manager told C4ISRNET.

“The immediate priority was to work with cohorts that were either in some kind of front line capacity,” such as health care workers, “or that were more severely impacted from a readiness standpoint,” he said.

The technology is in use by about 700 workers in the U.S. Navy and Office of the Secretary of Defense, Schneider said. He added that the study will expand to about 5,000 new users across different services, commands and the United States Military Academy.

“As we continue to collect data and refine the algorithm, priority will continue to be provided to those first responders and those that have had to adopt new operational tempo to support their duty obligations,” Schneider said.

The RATE program uses machine learning and artificial intelligence to analyze a person’s biometric data and detect small changes in a person before they experience any symptoms. The system can then alert a user they may be infected so they can quarantine or change their behavior to prevent further spreading the disease.

“RATE would allow us to non-invasively monitor a service member’s health and provide early alerts to potential infection that will help us to ensure troop readiness, better support their health and protect against the threat of further spread of the disease,” said Edward Argenta, science and technology manager at DTRA, said in a statement. “Unlike other more narrow approaches, this solution is designed to recognize a wide variety of infections and can help identify future novel threats.”

The RATE program’s COVID-19 detection application deployed to military units in mid-June, while Dr. Joseph Frassica, Philips’ head of research in the Americas, added that the algorithm is being further refined to better project COVID-19 infections. The RATE-COVID app is designed to work with all wearables and the team is looking to deploy to bring-your-own devices “in the future,” the release said.

RATE originally started years ago to slow the spread of general infections such as the flu, Frassica told C4ISRNET in an interview. In March, the partnership pivoted to the coronavirus pandemic, he said.

“With Covid it became even more critical to find those people who are pre-symptomatic to get them out of the population before they have a high enough viral load to start to spread the disease,” Frassica said.

The RATE program uses large-scale machine learning to analyze data across 165 biomarkers from a data set owned by Philips that contains 41,000 cases of hospital-acquired infections. Biomarker data is then process and analyzed in the cloud, generates an hourly RATE score that service members can then access through a secure website. it looks at several biometric markers such as temperature and blood pressure. The press release added that the risk score also works for “multiple general types of infection,” with Philips scientists also working to generate a tool that can detect the “next new unknown infectious agent.”

“By combining commercial technology, a rich data source and simple-to-use wearables, we are effectively providing a check-engine light on the military service member and getting that alert before they’re broken down with a disease. In military speak, we’re targeting left-of-cough awareness,” said Christian Whitchurch, DIU human systems portfolio director, in a statement.