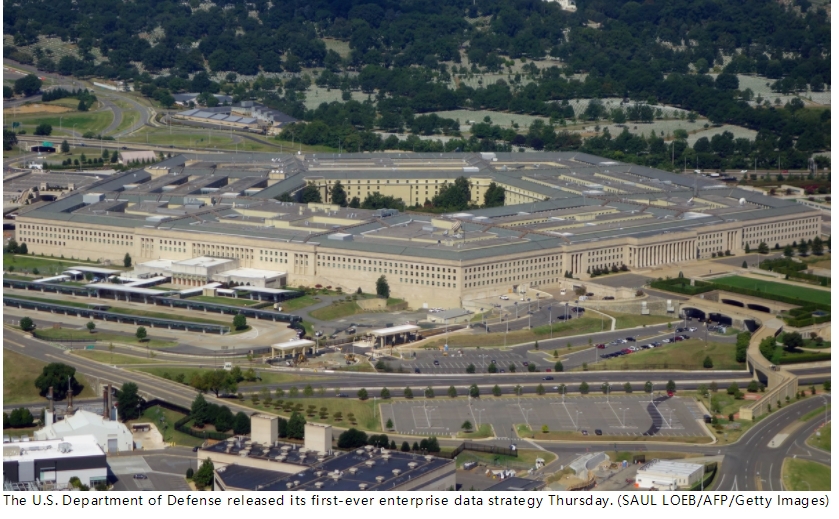 WASHINGTON — The U.S. Department of Defense released its first enterprise data strategy Thursday with its top priority focused on how to harness the department’s data for joint all-domain operations.

The Pentagon’s strategy outlines the principles, essential capabilities and end goals needed for DoD to become a “data-centric organization” with a focus on joint all-domain operations, senior leader decision support and business analytics. Department IT leadership has said in the weeks leading up the release that joint war fighting is the most important focus area.

To successfully enable those joint war fighting operations, the strategy outlines eight goals, each with several underlying objectives that will signal to leaders the data strategy is working. The goals are ensuring data is visible to users, accessible, understandable, linked, trustworthy, interoperable and secure.

“Data is the ammunition in the Digital Modernization Strategy and is increasingly central to warfighter advantage on and off the battlefield,” said DoD Chief Information Officer Dana Deasy in a statement. “The National Defense Strategy directed us to be more lethal, efficient, and interoperable with partners. This strategy is our first step to making that ammo persistently available to the men and women of the DOD regardless of echelon or geographic location.”

The strategy also outlines four “essential capabilities” to accomplish DoD’s data goal: An enterprise cloud architecture and other open-architecture capabilities, a culture shift to a reliance on data for decision-making, the creation of a family of standards for data asset management and sharing, and effective data governance.

The release of the Pentagon’s data strategy comes just weeks after U.S. Army and Air Force tested their ability to connect sensors and shooters across domains, a concept known as Joint All-Domain Command and Control, a major initiative across the services.

Both services recently demonstrated their ability to shorten kill chain timelines. At a massive network experiment in the Yuma, Ariz. desert known as Project Convergence, the Army was able to use artificial intelligence and machine learning algorithms to shorten the sensor to shooter timeline from 20 minutes to 20 seconds.

In the Air Force’s recent test of its JADC2 system, dubbed the Advanced Battle Management System, a top Air Force IT leader told reporters that the service successfully fended off a cruise missile with a kill chain that for the first time took seconds, “not minutes or hours to complete.”

To enable JADC2, the strategy also calls for data leaders across the Pentagon to set clear data standards and interoperability requirements for future technology. In addition, the strategy states that integrated JADC2 exercises, led by the Joint Staff, will identify data gaps and prioritize addressing them.

“When new data gaps are identified, the data governance community must work with mission area managers to determine whether changes are needed to hardware; software; tactics, techniques, and procedures; or risk acceptance,” the strategy states.

A critical piece to connecting sensors to shooters is making sure that data can be linked across disparate DoD sources — a goal the strategy calls out specifically. According to the document, Pentagon leaders will know the department is making progress on data linkage when it has implemented common metadata standards for data to be joined and integrated, as well as the implementation of globally unique identifiers so its data can be “easily discovered, linked, retrieved, and referenced.”

The services have already started down this path. Late last month, the Army and Air Force signed an agreement to develop a combined joint all-domain operations concept, the first step of which would be developing mutual data-sharing standards and service interfacing.

Critical to using data for joint operations, the department said, will be the coordination between the data governance community and the operational community. The governance community sets principles, policies and other data-related processes to manage data, while operational users will use the data to make decisions and launch effects. The strategy states that governance officials need to work closely with the Joint All-Domain Command and Control (JADC2) Cross-Functional Team (CFT), the Joint Artificial Intelligence Center (JAIC), and the Deputy CIO for Command, Control and Communication “to ensure that we can coordinate information with the tactical edge in a highly contested environment.”

In June, the DoD CIO’s office announced a new chief data officer to lead the department’s data efforts. That official, Dave Spirk, played a critical role in developing the document and, according to the strategy, will be crucial in making sure the DoD is following the strategy.

“I want to personally have a conversation with every data leader across the department and understand whether they consider themselves a CDO,” Spirk said.

Artificial intelligence is another critical piece of joint war fighting due to the sheer amounts of data the department has. The strategy calls for the DoD Chief Data Officer’s office to create a governance framework for algorithms and associated data “provides protected visibility and responsible brokerage of these digital assets.”

To get there, the department also needs to figure out which data it collects is actually useful.

“We need to identify what even is important data in the department,” the defense official said. “We have so much data that if we tried to save and curate it all, it would be a fool’s errand. We need to understand which parts are the most important.”

Asked about what how his position is enabling JADC2, the defense official told reporters that Spirk has regular meetings with the service’s chief data officers and JADC2 being a regular topic of discussion. The DoD data strategy states that in order to empower joint all-domain operations, the DoD CDO and service CDOs will be responsible for making operational users aware of advanced data-enabled capabilities in the commercial sector and DoD research.

“I don’t see any of the [military department] CDOs wanting to create walled gardens as they have in the past, but as data leaders increasingly find themselves visible and empowered I think that close teamwork … are going to be critical components to moving that forward,” the official added.