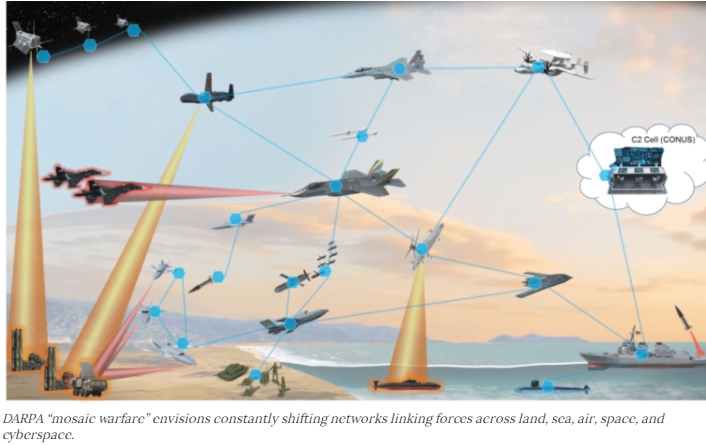 WASHINGTON: How do you write software to get two previously incompatible military systems to share data? DARPA’s suggestion: have an artificial intelligence write it for you — in just 45 minutes.

“The tool is auto-writing software instead of a human,” DARPA Strategic Technology director Tim Grayson said. In early trials where real military operators came up with specific “force packages” of combat systems and challenged DARPA to integrate them, he told me, “they’re creating entirely new systems of systems architectures, getting the software… in about 45 minutes.”

That particular program – called STITCHES, a nested acronym too awful to unpack here – was used in the Air Force’s August ABMS “On Ramp” experiment. It is just one of roughly 20 DARPA projects attacking various aspects of Mosaic Warfare, a DARPA concept for future conflict that goes beyond the Pentagon’s new emphasis on joint All-Domain Operations.

The armed services now all pay at least lip service to the idea of networking all their assets and coordinating operations across the DoD-endorsed domains of land, sea, air, space, and cyberspace. But DARPA argues that traditional hierarchies and tables of organization just aren’t flexible enough for this new kind of fighting. Instead, the defense research agency wants future commanders to grab assets as needed, then create an electronic network and a task force structure optimized to the specific mission, on the spot.

“At their core,” Grayson told me, “they are on-the-fly systems of systems that involve machine to machine

If traditional military organization is a jigsaw puzzle, where each piece has its pre-planned place and can fit nowhere else, DARPA’s preferred model is a mosaic, where the artist can fit tiles of any color together wherever needed to form the desired pattern.

That’s not how troops are trained, organized, or networked today – but the creative potential is there. “If you look at how an Air Force squadron does its mission planning for the next day’s sorties, or how a Marine Corps unit does combined arms maneuver warfare, it is very fluid and adaptive,” Grayson said, “but our warfighters are limited by the organizations and the equipment that are apportioned to them before — well before — a fight begins.” What if they could custom-tailor their organization and equipment to the fight at hand?

So Grayson and his team are coming up with organizational concepts and technological tools to make Mosaic Warfare possible. The idea is to have AI automate the gruntwork of connecting different systems so humans can focus on what needs to work together to succeed in the mission, instead of how.

Traditionally, when two military systems can share data – a radar sending target coordinates to a missile launcher, for example – it’s because they were designed to do it and have a unique, customized connection, which isn’t compatible with anything else. But for All-Domain Operations the military wants every system to be able to share data with every other. In the future, you can require every new thing you build to be compatible; but for the vast inventories of legacy systems, you’re stuck kludging together connections one at time. The problem is, that job gets exponentially harderwith each thing you add to the network. Connecting 10 items in every possible combination requires 45 connections, connecting 20 requires 190, connecting 100 requires 4,590….

“If I’m sitting in a program office, trying to create so-called interoperability for all future contingencies in every possible permutation of this system of systems, the combinatorics of that the problem are immense,” Grayson told me. “That’s why a lot of these integration programs get to be very expensive and take so long, when you have to hand-code each of those n-square translations and test them.”

“How do we create that Internet-like experience where the underlying fabric is a bunch of clunky old tactical radios?” he asked. Well, that’s where STITCHES and similar technology comes in. The idea is to replace laborious manual coding with automation, so you can connect whatever you need to quickly. That lets you move from a fixed and limited list of things you can connect with to an Internet-like breath of options, where you type in what you want and see the data immediately. 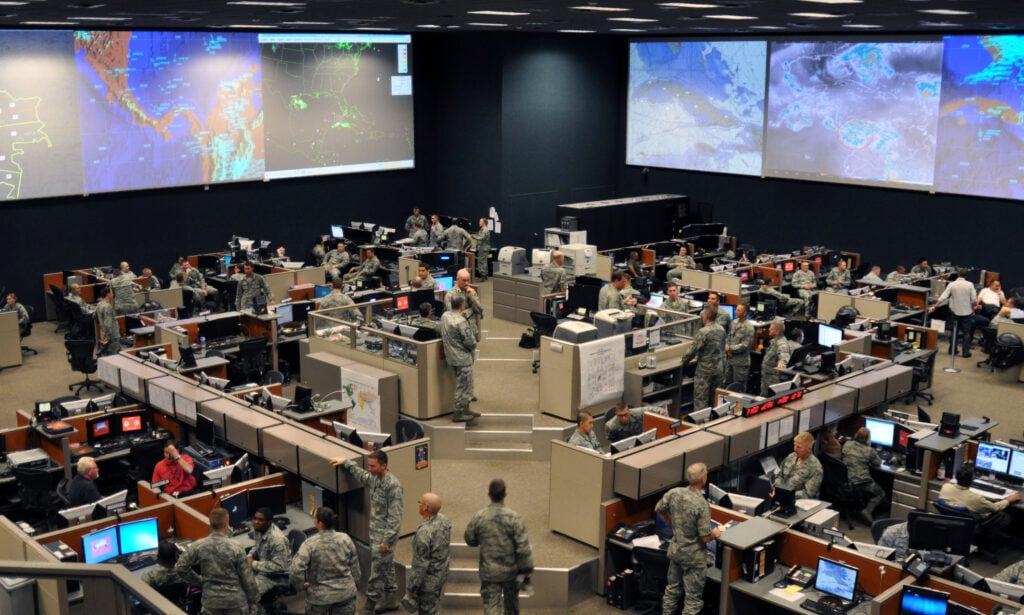 Other DARPA mosaic warfare efforts apply AI to related tasks that, today, require laborious staff work and rigid planning. “That’s why we have so many people that sit in an Air Operations Center,” Grayson said. “Yes, I need the commander and the strategist sitting there deciding the big picture. Where do I want to go move things and what targets do I want to go after? And then I’ve got all the down-in-the-weeds planners, who are [asking]: ‘oh! can I actually reroute those aircraft? And do they have enough fuel? And do they have a tanker that can rendezvous? And have I done airspace deconfliction?’”

The first class of question – given my assets, obstacles, and circumstances, how do I achieve my objectives? – is what’s called an “open-world problem,” Grayson told me, and it’s something AI struggles with. For the foreseeable future, that kind of creative problem-solving is a job for humans. But the second class of question – how do I get this physical thing to this place by this time? – is a “closed-world problem” whose clear constraints make it solvable for AI.

It’s like how Uber’s software matches you almost instantly with a driver. You, the human customer and not an AI, made the decision on where to go out of all possible destinations in the world. Each individual driver, not an AI, makes the decision to drive you or not, based on your destination and fare. What the AI does is simply figure out which drivers are nearby and available to ask, then keeps on asking until one is take you. The humans bound the problem, the AI solves it within those constraints.

One example is airspace deconfliction, the military extreme-sport version of air traffic control. How do you have Air Force, Navy, Marine, and Army assets from stealth jets to helicopters, from cruise missiles to artillery shells, flying over the same area of the map, dynamically evading enemy threats and striking targets, without running afoul of one another? Traditionally, you allocate invisible lanes in the sky for different organizations and types of aircraft or weapon, so you never (for example) fly manned planes into a path that howitzer shells might take. But because human staff officers can’t manually renegotiate and reallocate airspace allocations all that fast, you end up constraining your flight paths more narrowly than you need to at any given moment.

At any given time, “there’s as much as 95% excess volume of airspace that isn’t used,” Grayson said. “That’s essentially an opportunity cost. [Maybe] I really wish I could fire that long-range missile that’s going to go right though someone else’s lane. If I could validate in real time… that missile corridor is going to be free of any aircraft it might collide with, then that’s an opportunity I’ve created for myself.” So this year DARPA created a program called ASTARTE to automatically check and deconflict flight paths. 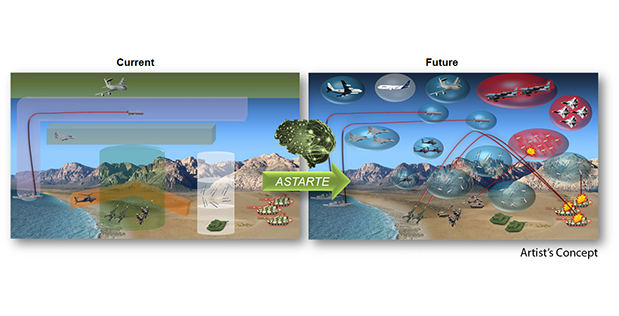 “The big, catchy, attention-getting, flashy part of it, is we’re flying AI to dogfight… and so, yeah, that’s cool,” Grayson told me. But if the jets can fly themselves in combat, then what could the highly trained human pilots be doing instead?

“if you don’t have to be worried about the detailed hand-eye coordination of flying the jet, you can focus more on doing the battle management,” Grayson argued. “The pilots sitting there flying in these aircraft that are autonomously conducting dogfights – besides hopefully not clenching the sides of the seat with white knuckles – are going to be given high-level cognitive management tasks. [You] automate away the button pushing so the human operator can function on a more cognitive level.”