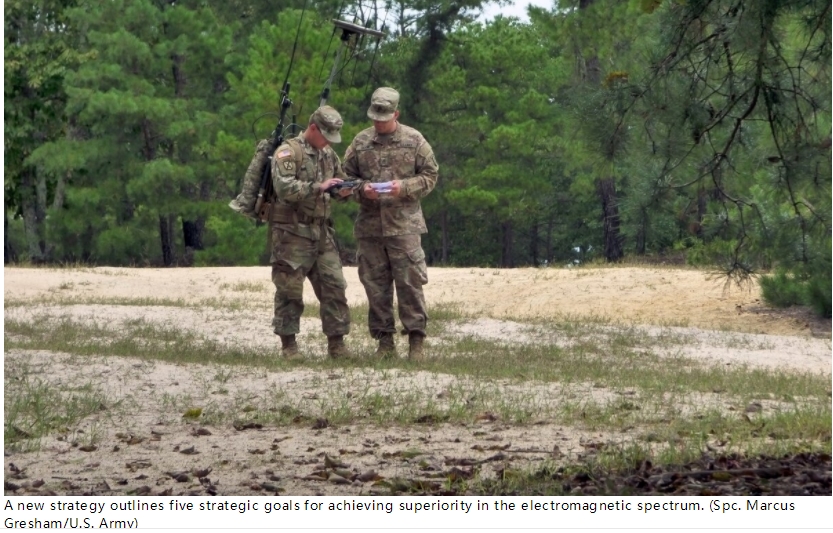 WASHINGTON — The U.S. Department of Defense released its highly anticipated electromagnetic spectrum superiority strategy Thursday, aimed at guiding how the department will develop capabilities as well as partner on and pursue readiness within the spectrum to gain an edge on sophisticated adversaries.

In recent years, U.S. adversaries have sought high-tech methods to deny the electromagnetic spectrum, on which American forces often rely. These methods include jamming or spoofing communications, radars and munitions.

“The Nation has entered an age of warfighting wherein U.S. dominance in air, land, sea, space, cyberspace, and the electromagnetic spectrum (EMS) is challenged by peer and near peer adversaries,” the strategy stated. “These challenges have exposed the cross-cutting reliance of U.S. Forces on the EMS, and are driving a change in how the DoD approaches activities in the EMS to maintain an all-domain advantage.”

“This jeopardizes the U.S. military’s ability to sense, command, control, communicate, test, train, protect, and project force effectively. Without the capabilities to assert EMS superiority, the nation’s economic and national security will be exposed to undue and significant risk.”

The strategy lists five strategic goals, each delving deeper into subordinate objectives. They include:

“The new strategy will have wide-ranging impacts across the DoD. It will shape the future of the department, influencing how the DoD makes decisions on how best to design, resource and implement EMS concepts as a new foundation for multidomain war fighting,” a defense official said Oct. 29 during a briefing to reporters on the strategy on background because the DoD would not let them speak on-the-record.

The Pentagon needs a top-down vision to help guide operations, investments and capabilities within the electromagnetic spectrum.

The strategy pulls from previous concepts and initiatives such as the 2013 Electromagnetic Spectrum Strategy and the 2017 electronic warfare strategy. However, since those documents were devised, the operational environment has become more complex.

“The primary focus is a holistic approach to electromagnetic spectrum management and electromagnetic warfare,” the official said regarding departures from previous strategies.

In the past, the official said, some of those activities were siloed while the new strategy articulates freedom of action within the spectrum through a more holistic approach.

The strategy also noted that the DoD is transitioning from its definition that electronic warfare is separate from spectrum management to a more unified approach of electromagnetic spectrum operations, or EMSO.

The Joint Staff updated its doctrine document in May governing electronic warfare, shifting to EMSO.

The official said some of the particular technologies the department is looking for include dynamic spectrum-sharing technologies that need to incorporate sensing, accessing, sharing and maneuvers, frequency agility, frequency diversity, tools that minimize an EMS footprint, tools to reduce vulnerability detection, and resiliency against radio frequency-enabled cyberattacks.

The strategy paints broad strokes for what’s desired and required beneath each strategic goal. However, the Pentagon is still working on a formal implementation plan to ingrain them within the department and armed services.

Within 180 days of being officially signed, the senior designated official, who is currently the vice chairman of the Joint Chiefs of Staff, will create a road map and implementation plan alongside the Electromagnetic Spectrum Operations Cross-Functional Team. A defense official said the way forward should be finalized by March 2021.

That plan will have a series of tasks aligned to the five goals. What’s more, the implementation team will identify risks to the department and outline trade-offs that must be made against other priorities within the Pentagon, the official said.