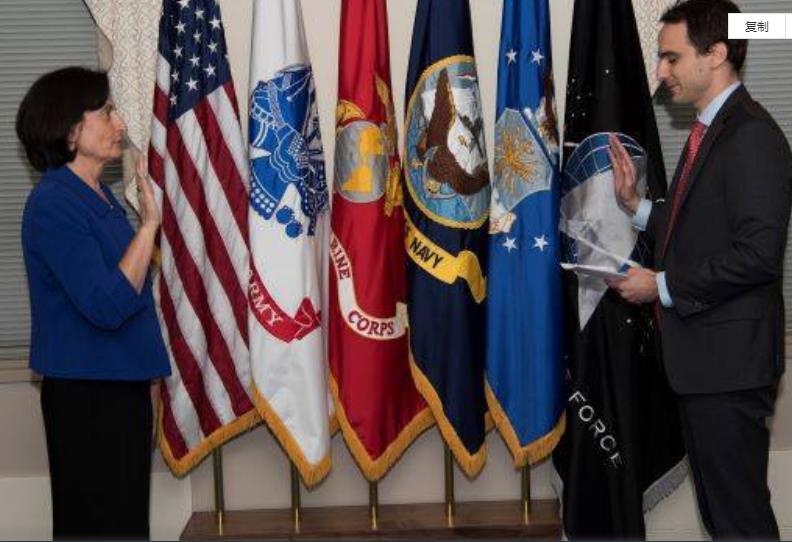 The new director of the Defense Advanced Research Projects Agency has spent most of her career outside of the Pentagon, looking in. A native of Greece, she’s one of the few foreign-born people tapped to lead the military’s secretive band of futuristic scientists. She is clear-eyed about the need to bring military software into the 21st century. And she is the third woman to lead the agency since its inception in 1958.

Coleman’s perspective will further shape an agency that already prides itself on breaking the mold.

Unlike her immediate predecessors, director Steven H. Walker and acting director Peter Highnam, Coleman didn’t come to DARPA after a long career in civil service. She took over at the agency in September following decades in academia and business.

She’s held top positions at the University of California, Berkeley’s Center for Information Technology Research in the Interest of Society, Silicon Valley startup Atlas AI, the Wikimedia Foundation, and household names from Yahoo to Samsung.

Yet she continued to look for opportunities as a military mentor: She is a former Defense Science Board member, a founding chair of DARPA’s Microsystems Exploratory Council, and an adviser to companies like Lockheed Martin and Airbus. She also co-chaired a review panel for the Air Force’s “Science and Technology 2030” strategy that was released last year.

“I don’t think I ever had a boss that I didn’t get into trouble with for doing all this work for the DOD,” Coleman said in a Nov. 18 interview with Air Force Magazine. “Then you wake up one day, and you think, ‘Oh, if I really enjoy doing this so much,’ which I did, and ‘if it’s so meaningful to me, why don’t I just do it for a living?’”

Her arrival marks a change from DARPA’s status quo at a time when the U.S. armed forces are scrambling to deploy new technology ever faster, learn from Silicon Valley, and ensure their dominance amid economic and military competition with other world powers.

Fresh off of her first all-hands meeting with agency employees, Coleman said her No. 1 message to staff is about the importance of time.

Employees tend to cycle through DARPA after a few years, and Coleman wants program managers to make the most of that time. She’s pushing researchers to determine within months whether their efforts will succeed, so they can pivot to a new idea if they fail.

The idea of compressing and controlling time is also at the heart of new technologies DARPA wants to deliver to the military. That pairs with the Pentagon’s push to speed up the pace of combat and make decisions faster than the enemy.

“If you can confer a time advantage to our service members through processes, through tools, technologies, through systems that we enable, we give them the gift of time,” she said of leveraging things like artificial intelligence. “Then they’re able to … make [time] go faster for us or slower for us, and conversely for our adversaries.”

The new director wants to see innovation not only in the lab, but in how DARPA hands off tools to the armed forces as well. In addition to more traditional DARPA-to-service transitions, Coleman pointed to a pilot program where the agency helps startups raise U.S.-based venture capital and scale up their business. That gives small vendors the backing to mature their products and get them to market, where they can be useful to both the military and the country at large.

“DARPA is in the business of systematic changemaking, not just about discovering what the new breakthrough might be,” Coleman said. “It’s also about being there and seeing it over the line.”

Starting the week of Nov. 23, Coleman will launch a 90-day review that brings together workers from across and outside of the agency to decide DARPA’s future priorities and identify any technology gaps looming ahead. The deep dive will lead to a set of annual goals to move the organization’s myriad lofty ventures forward more holistically, she said.

But don’t think of it as Coleman’s personal strategy: “I want it to be as inclusive as possible,” she said. “We’re trying to do something that really brings the brilliance of everybody in the agency together.”

Military research and development are likely to see tough tradeoffs in response to what the Pentagon expects will be stagnant defense funding. But Coleman said DARPA is designed to be insulated against those headwinds. Even when the armed forces scale back partnerships on certain programs with DARPA, Coleman said the agency’s size gives it the autonomy to pursue its own course.

DARPA’s 200 or so employees manage a $3.5 billion portfolio—a fraction of defense research that totals tens of billions of dollars each year. Because the agency doesn’t have to trade off those dollars for daily combat expenses, maintenance costs, or other concerns in the armed forces, Coleman said DARPA should be able to stay on track despite fluctuations in federal spending.

Coleman is taking the helm in an era when the Pentagon’s push to accelerate research and development is a central piece of its global competition strategy. From hypersonic weapons to quantum computing, her challenge will be to find areas where no one else is exploring, and to anticipate how DOD’s tech priorities might evolve over the coming decades.

One area where their concerns converge is microelectronics. DOD has sounded the alarm on security threats and shortages in that sector for years as U.S. manufacturers cede ground to China.

“I feel almost that we are in a place where there’s a national emergency,” Coleman said. “Unless we act and act decisively, I think we will be jeopardizing our ability to innovate here in the United States.”

She is ushering in a new phase of DARPA’s Electronics Resurgence Initiative, an effort that began in 2017 to shore up the microelectronics sector. The agency aims to put a request for information out in December to gather ideas on how to move forward, she said.

“We will, of course, keep looking for leap-ahead capabilities, discovering compute fabrics that transcend silicon,” she said. “At the same time, we will be looking at ways of fundamentally changing the parameters of manufacturing. … It has become extraordinarily expensive to build a capability like that.”

Coleman wants to explore the role of open-source semiconductor designs, and make it easier for small labs to produce their creations in mass. She envisions a commons where academics and companies can mature their ideas before seeking venture capital to scale up.

The former artificial intelligence executive will also bring important insight into that field as it picks up steam within the DOD. She’s familiar with the data-crunching power of AI and how it could change the military’s understanding of conditions on the ground.

In one example from her firm, Atlas AI: “Our goal was to use open-source satellite imagery and marry it with state-of-the-art analytics and deep learning and be able to create insights about what is going on on the ground, in our case, in Africa. We would look at the village and it would tell you whether people had $2 a day disposable income or $5, with very high accuracy,” she said.

DOD is beginning to dig into those kinds of applications for military use through the Joint Artificial Intelligence Center and other efforts. DARPA wants to focus on a more sophisticated update to data-analysis algorithms known as “third-wave AI”: systems that not only decipher the world on their own, using the data sets they are programmed to understand, but offer courses of action as well.

Through projects like AlphaDogFight, DARPA hopes to give people confidence in what AI can and cannot do, so humans are more comfortable partnering with the software as it gets “smarter.”

“AI is really transforming the way that we are able to understand the world around us,” as well as the prospect of human-machine teaming in combat, she said.

To enjoy the fruits of those breakthroughs, though, the Defense Department needs to catch up to the private sector in software development. Flexible, fast coding is starting to take hold throughout the military, which has long relied on expensive, multiyear contracts for software with requirements that were outdated by the time a product was delivered.

Coleman joins the growing pool of former tech-sector software experts in DOD who are spearheading a different way of doing business.

The DARPA director has “lived and breathed” software development as a software engineering executive, building mobile phones and tablets at Nokia and managing billions of logins while overseeing membership at Yahoo. She hopes that perspective “will bring in a fresh pair of eyes to what the agency is doing, … meshed with a desire to serve and see our national security [science and technology] move to a different level.”

After becoming the first in her family to attend college and immigrating to the United States, Coleman wants to use her prestigious post to offer others like her the same opportunities.

“I want to make sure that we have as diverse a workforce as possible, because we are so much smarter, so much more likely to succeed if we have representation from all communities,” she said.

An agency spokesman said DARPA doesn’t have a demographic breakdown of its staff, but America’s science and technology sector heavily skews white and male.