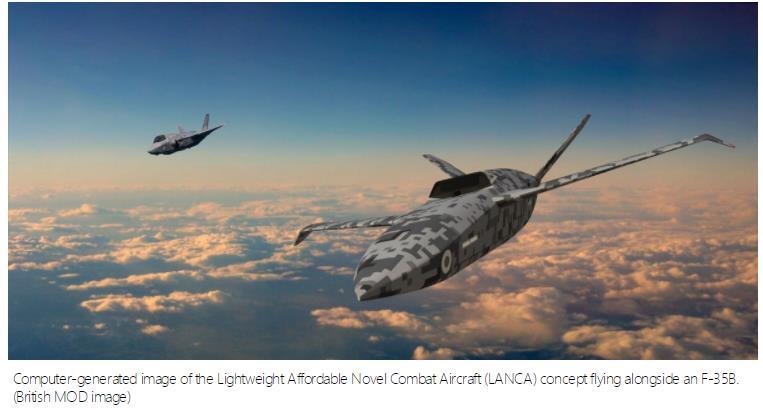 A British initiative to develop an unmanned air vehicle known as a “loyal wingman” has received a boost with the announcement by the Ministry of Defence that a Spirit AeroSystems-led consortium is to build a full-scale test vehicle.

The Belfast, Northern Ireland-based arm of Spirit and partners, including Northrop Grumman UK, have been awarded a £30 million (U.S. $41 million) deal to lead a partnership, known as Team Mosquito, for building the demonstrator vehicle in time to start a test flight program by the end of 2023.

Work maturing the Lightweight Affordable Novel Combat Aircraft, or LANCA, will run for three years until the conclusion of the flight trials, an MoD official said.

Following completion of the demonstration phase, the Royal Air Force will analyze the data and use it to inform capability decisions, said the official.

The unmanned vehicle is part of the air force’s push to produce a low-cost machine in a fraction of the time of normal combat jets.

The Spirit Mosquito team, previously known as Blackdawn and led by Callen-Lenz , secured the deal beating out proposals from partnerships led by Boeing and Blue Bear Systems.

Designing and building the airframe is a small but significant win for the company, which centers on building structures for the Airbus A220 airliner and other civil sector work.

Northrop Grumman UK, the key partner alongside Spirit in Team Mosquito, said in a statement it will be providing model-based systems engineering and agile engineering expertise.

The MoD said further companies in the new team will be announced later.

Work on LANCA has been underway since 2015, with the MoD’s Defence Science and Technology Laboratory taking the lead pursing innovative combat air technologies and concepts that offer radical reductions in cost and development time.

Defense Ministry officials previously said they want to produce a drone for 10 percent of the cost and in one-fifth of the time of a combat jet.

“If successful, Project Mosquito’s findings could lead to the capability being deployed alongside RAF Typhoon and F-35 Lightning jets by the end of the decade,” said the MoD.

If the project is successful the Mosquito loyal wingman platform could eventually become the first unmanned platform in British service able to target and shoot down enemy aircraft.

The Mosquito effort is one of several future air combat initiatives being pursued by the British, including development of swarming drones and the Tempest next-generation manned and unmanned combat jet.

Air Chief Marshal Mike Wigston said the British were “taking a revolutionary approach, looking at a game-changing mix of swarming drones and uncrewed fighter aircraft like Mosquito, alongside piloted fighters like Tempest, that will transform the combat battlespace in a way not seen since the advent of the jet age.”

The loyal wingman concept is generating increasing interest with militaries across the world, with similar work underway in the United States, Australia and Europe.