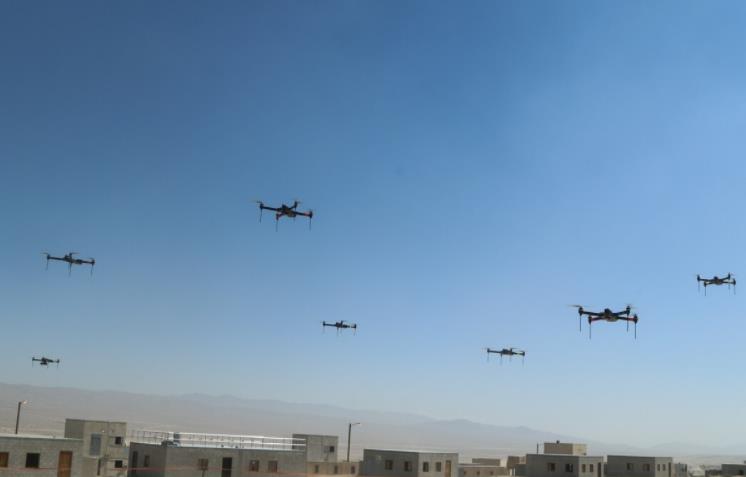 WASHINGTON — The Pentagon aims to field a low-collateral effects interceptor — part of its evolving and enduring solution to countering small drones — by fiscal 2022, according to the joint office in charge of the effort.

The Defense Department established the Army-led Joint Counter-Small Unmanned Aircraft Office, or JCO, a little more than a year ago. The office laid out a path for how it will develop a system to counter small unmanned aerial systems, releasing a strategy earlier this month and approving a set of requirements last fall that guides industry to develop technology to plug into a single command-and-control system.

The JCO also identified a group of systems that make up an interim C-sUAS solution last year.

The first opportunity for industry to demonstrate technology (there will be roughly two demonstrations a year) will take place the first week of April at Yuma Proving Ground, Arizona, according to Col. Greg Soule, the JCO’s director for acquisition and resources, who spoke to reporters during a Feb. 2 press event.

The Air Force Research Laboratory and the Army’s Rapid Capabilities and Critical Technologies Office, or RCCTO, will run the demonstration.

“We wanted to provide this as a recurring opportunity for industry to be able to show us the latest and greatest that they’re working on so that we can make a decision as a department on what solutions look promising to either evaluate further or roll them into our system-of-systems approach,” Soule said.

The office is currently combing through industry whitepapers to decide who will receive an invitation to give an oral presentation. From there, the JCO will make a final decision on who will be invited to the first demonstration, Soule said.

The technology demonstrated in April will be compared to similar low-collateral effects interceptor solutions that are already under contract with the government, Soule said.

Then the JCO will carve out a path to a second demonstration in late FY21. Then, in FY22, the office will select an initial capability for procurement and fielding to the force, according to Soule.

But the office will not stop there, Soule noted. It will continue to look at follow-on efforts, future solutions and payloads that could be incrementally rolled into the system as part of a low-collateral effects interceptor package.

Rapidly fielding a low-collateral effects interceptor could answer Congress’ call in the FY21 National Defense Authorization Act for the Pentagon to field a C-sUAS system as early as next fall. Congress added $47 million to the effort to develop, test and begin production “as early as” FY21 to meet immediate operational needs in this area.

“We don’t see the counter-UAS problem set as one enduring solution,” Maj. Gen. Sean Gainey, the JCO director, said during the same press briefing. “We see it as a range of capabilities integrated into a common C2 that gives you the ability to address threats across the range of threats out there and the ability to keep the pace of this threat because if there is a game-changing technology out there. You are going to find yourself consistently adjusting to the threat out there.”

The JCO’s approach is to address identified gaps in capability and integrate technology that could fill those gaps as it becomes available in order to provide an enduring capability, Gainey said.

The low-collateral interceptor, Gainey said, would provide the ability to handle “a range of effects with a kinetic capability” and can be introduced relatively soon.

Another example of a possible quick win is a directed-energy capability since high-energy lasers are already fielded and have proved successful in contingency environments, Gainey added. “We’re building off of that capability to where you will see high-energy lasers integrated into our architecture. Some of them are integrating now, and it’s a matter of scaling up to the ultimate scale that we want to,” he said.

The JCO is also working through the Air Force’s effort on high-powered microwave capability development that “will also be deployed pretty soon,” Gainey added.