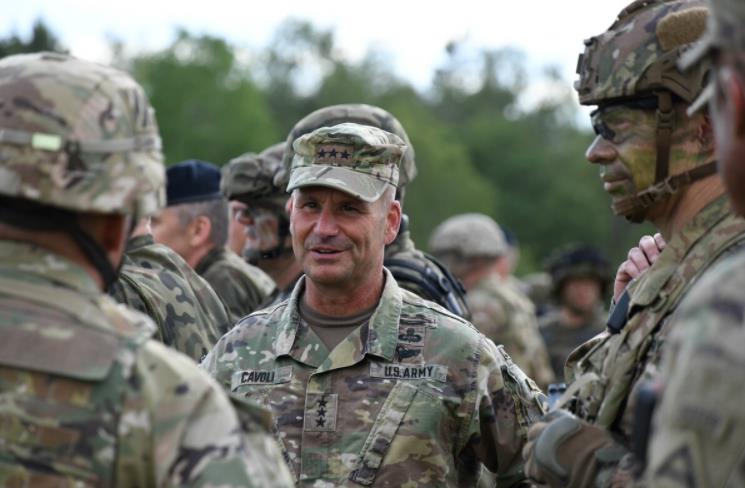 WASHINGTON — The European theater “absolutely” needs a multidomain task force, according to Gen. Christopher Cavoli, who is in charge of U.S. Army Europe and Africa. But while the intent to deploy such a unit has existed for several years, little progress has been made.

The Army is a few years out from converting its Multi-Domain Operations war-fighting concept into doctrine. The concept addresses great power competition and potential conflict with near-peer adversaries across air, land, sea, space and cyberspace.

The service stood up one multidomain task force, or MDTF, unit that is now based out of Joint Base Lewis-McChord in Washington state. It has been active in prominent exercises in the Pacific region and will likely show up at the Army’s Project Convergence campaign of learning at Yuma Proving Ground, Arizona, in the fall of 2021. The MDTF was specifically created to assess the war-fighting concept through exercises, but MDTF units will likely become operational as the MDO doctrine solidifies.

The service plans to stand up a second MDTF unit in the Pacific region in fiscal 2021.

This year, shortly after the Army released its FY21 budget request, the service issued an unfunded requirements list to Congress that included a need for $151.4 million for enhancements to MDTF units intended for Europe and the Indo-Pacific theaters. According to the list, the extra funding would sustain, restore and modernize building renovations as well as provide adequate housing for personnel and headquarters for MDTF elements and the second and third MTDF units.

“The capabilities that the multidomain task force are going to bring and help us integrate, the expertise that it will bring, are going to be very, very important to updating the way we plan to operate on the European continent,” Cavoli said at a Feb. 3 Association of the U.S. Army virtual event. “And we will be able to extend that to the African continent as well when we get those capabilities.”

Recent exercises proved the importance of an MDTF unit in theater operations, Cavoli said. The first Defender Europe exercise, which was scaled back in 2020 due to the coronavirus pandemic, showed the need, as did the Joint Warfighting Assessment that brought in the Multinational Corps Northeast from Szczecin, Poland, and the Allied Rapid Reaction Corps together with the U.S. Army’s European headquarters.

The exercise attempted to plan “against the hypothetical scenario of large-scale combat operations” in 2035, Cavoli said.

“After we had MDO capability and we experimented with how we would operate with those capabilities and inside a joint and combined force that was using those capabilities, it was a very illuminating exercise; very, very, very challenging both intellectually as well as just in terms of sheer workload and manpower to try to achieve convergence across multiple domains in a combined context at tempo,” Cavoli said, “so I would be very eager to get a multidomain task force.”

The MDTF in the Pacific, he said, has given the Army “good things to think about and to emulate,” adding that the service plans to continue “to build MDTFs, and we are very much looking forward to the day when the Army stations one here.”

Over a year ago, the Army in Europe was in the nascent stages of introducing the MDO concept into its training routines and exercise planning, but amended its structure to establish additional intelligence, cyber, electronic warfare and space capabilities in Europe. It was anticipated at the time that a task force would be introduced at Defender Europe in 2020.

In an interview with Army Chief of Staff Gen. James McConville in October 2020, he told Defense News that the intent is to have two MDTF units in the Pacific and one in Europe — or “one that supports Europe.”

The Army was “still working on the posturing of forces in Europe,” he said at the time, which included considerations of then-President Donald Trump’s mandate to dramatically reduce troops in Germany. Those plans have been put on hold.

The chief said the exact positioning of the MDTF for Europe had not been decided.

In a separate interview last fall, Vice Chief of Staff Gen. Joseph Martin, told Defense News that the European MDTF had not been stood up due to a whole host of reasons.

“We’ve got structure baked into our total Army analysis process, we’re not concerned about that, but it’s making sure we’ve got the right location for the experimental task force and the timing of it is — it’s an outcome based on a whole host of different factors that we’re considering,” Martin said.

Cavoli also advocated for the need for increased fires capability in Europe. “We’re also excited about proposals for something called a ‘Theater Fires Command,’ which would develop and curate, hold custody of targets during the competitive phase, and then execute during a potential conflict,” he said. “That Theater Fires Command will also bring enormous capability with it, and it will put us into — it will help us, as MDO promises, to push away out of a close fight and be able to fight a little bit more at a standoff so that we, when we do engage in a close fight, it would be under much more advantageous circumstances.”