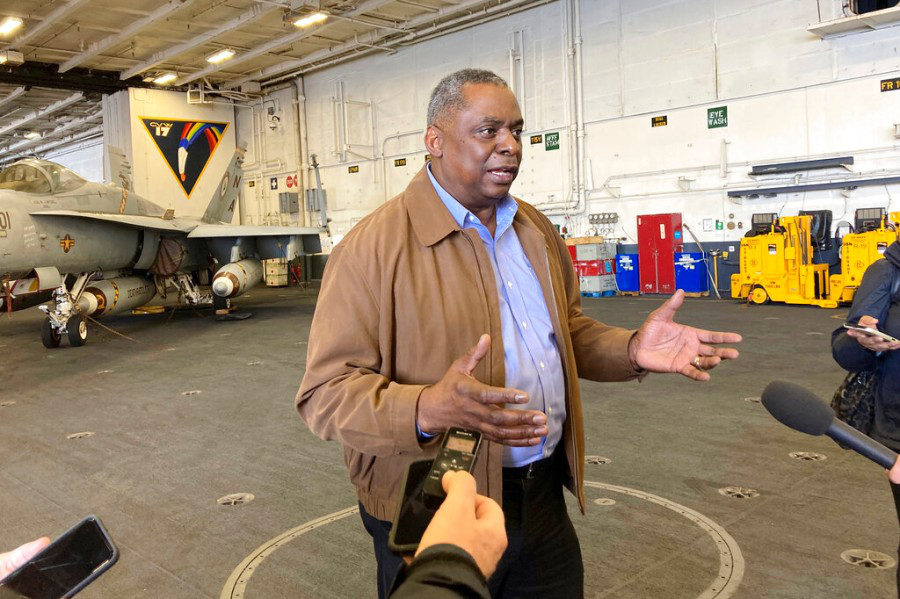 Defense Secretary Lloyd Austin speaks during a briefing after arriving on the aircraft carrier USS Nimitz, Thursday, Feb. 25, 2021, at sea.

ABOARD THE USS NIMITZ — Defense Secretary Lloyd Austin told sailors on the USS Nimitz Thursday that he hopes to avoid long ship deployments like the more than 10 months they just spent at sea. But as he made his first aircraft carrier visit as Pentagon chief, he acknowledged the demand for American warships around the globe as he wrestles with security threats from China in the Pacific and Iran in the Middle East.

Standing in the ship’s hangar bay, Austin said he will make a decision soon on whether to send a carrier back to the Middle East, where the Nimitz had been. But he said there have been times when the U.S. has opted not to have a carrier strike group in that region.

“There’s going to be gaps,” he said. “As we do that, we do things to make sure we have resources in the right place so can respond.”

The Nimitz, which left its homeport of Bremerton, Washington, last April, has been at sea for nearly 300 days, including several weeks of pre-deployment exercises. By the time it gets home in March, the ship and its strike group — which includes the USS Princeton and the USS Sterett — will have sailed about 99,000 nautical miles around the globe.

The ship’s return home has triggered renewed debate over whether the U.S. should keep a persistent aircraft carrier presence in the Middle East as a deterrence to Iran. And it underscores the persistent competition for Navy ships as the U.S. and the Pentagon focus on China as a key threat that has required an escalating presence in the Indo-Pacific.

Over the past year, however, military commanders have successfully argued for a carrier presence in the Gulf region because of threats from Iran and Iranian-backed militias. Just a year ago, the U.S. poured more than 20,000 additional troops into the Middle East to counter escalating tensions with Iran that peaked with the missile attack on American forces in Iraq in early 2020.

The Nimitz’s lengthy deployment was largely due to decisions to keep it in the Middle East last year and this year to serve as a deterrent to Iran. Sailors late last year were just starting to head home, after being held in the Gulf region for an extended time. But in early December, as the U.S. pulled troops out of Afghanistan and Iraq, then-acting defense chief Christopher Miller announced that they would be staying in the region — forcing the ship to turn around and head back to the Gulf.

On Dec. 31, Miller announced the ship was finally going to head home. It’s now off California.

President Joe Biden has announced plans for a Pentagon review of national security strategy on China as part of his push to recalibrate the U.S. approach with Beijing. Biden’s call for a new task force to review strategy comes as the new administration shows growing recognition of the challenges that the U.S. faces from China’s modernized and more assertive military.

The review will weigh U.S. intelligence, troops levels in the region, defense alliances with China and more.

Speaking to reporters traveling with him on the Nimitz, Austin said that as directed by Biden, he is doing a detailed review of how the U.S. forces are positioned around the globe to ensure resources are focused on national security priorities.

His visit to the ship came on Austin’s first travel as defense secretary. He spent two days on the West Coast, largely visiting military vaccination centers in San Diego and Los Angeles.

But as he spoke to sailors on the ship, he acknowledged their sacrifices in being away from families for so long. Recalling his 18-month deployments to Iraq as a commander, the retired Army general said, “I understand the stress that that can place on families.

“Any potential adversary out there in this ocean or any other ocean, has to know when they look at what you’ve accomplished, that the United States takes very seriously our security commitments around the world,” Austin said.

He added, however, “I don’t want deployments like this one to be the norm, and so we need to take a hard look at that, but you handled it very very well.”