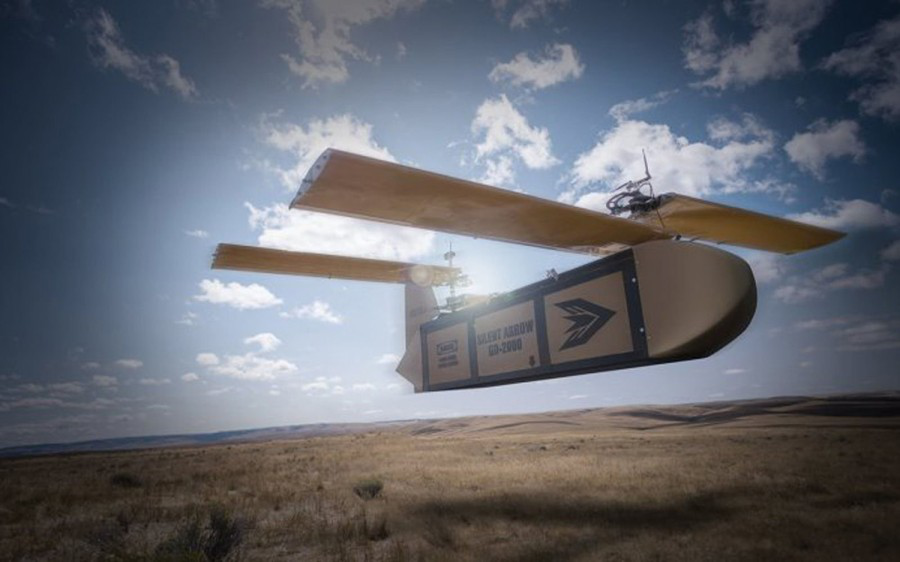 On Feb. 16, Yates Electrospace announced that it had been awarded an Air Force contract for development of a scaled-down version of its autonomous Silent Arrow glider, shown here in an illustrated image.

Outside of the formal contract announcements, though, AFSOC itself is indicating that it generally sees the glider as “a very efficient and flexible way to conduct stand-off airdrop resupply (getting supplies to troops without having to be directly over a target area),” according to an email responding to a Daily News query on the command’s plans for the glider.

Also according to the email, AFSOC sees the glider as an effective and efficient way to conduct “electronic warfare, intelligence, surveillance [and] reconnaissance” work, as well as “other non-kinetic battlefield effects (battlefield missions that don’t involve explosives or other munitions).”

On Feb. 16, Yates Electrospace, a California-based firm that designs and builds electric-powered aircraft, announced that it had been awarded an Air Force contract for development of a scaled-down version of its autonomous Silent Arrow glider.

The glider, designed for launching out of the back of larger aircraft such as the four-engine C-130 flown by AFSOC, comprises a wooden box with an aluminum frame that measures 2 feet tall, 2 feet wide and 8 feet long.

The box, which can carry more than 1,600 pounds of cargo, is subsequently outfitted with an autopilot-equipped nosecone and a rear twin-tail assembly, according to a diagram on a website describing the craft and its capabilities.

As the Silent Arrow is pushed out of its host aircraft, four wings atop the box spring out to send the glider into flight. With a full payload launched from 25,000 feet, the Silent Arrow can glide for up to 40 miles.

It’s not clear exactly how much smaller the glider wanted by AFSOC will be in comparison with the full-size glider. But a news release announcing the contract award to Silent Arrow, which is part of Yates Electrospace, notes that it will be scaled down sufficiently to be deployed from the cargo ramp of the CV-22 Osprey twin tiltrotor aircraft operated by AFSOC. AFSOC also could deploy the smaller Silent Arrow from various helicopters, according to reports on the recent contract award.

The contract awarded to Silent Arrow for the scaled-down “flying box” is a Small Business Innovation Research contract. The SBIR program, coordinated by the federal Small Business Administration, is intended to help small businesses engaged in research and development contracts.

Silent Arrow will do its work under the contract in partnership with the Air Force Research Laboratory, headquartered at Ohio’s Wright-Patterson Air Force Base.

Neither the news release nor other sources of information on the contract, officially titled “Feasibility of Downsizing and Adapting Commercial Silent Arrow Cargo Delivery UAS (Unmanned Aerial System) to Meet Specific AFSOC Operational Requirements,” indicated the dollar amount of the contract.

Funding for the work will come from AFWERX, an Air Force innovation program established in 2017 “to create transformative opportunities and foster a culture of innovation,” according to its website.

Yates Electrospace reportedly has sold almost two dozen of its larger Silent Arrow gliders to an unidentified European government-owned enterprise, according to Forbes.com, which noted that the company also has licensed production and sales to a United Kingdom company for production of another 40 of the larger gliders.

In this country, according to Forbes.com, the Marine Corps has expressed interest in the larger Silent Arrow glider, but thus far there have been no orders from the U.S. military.

Looking ahead to its future with the scaled-down Silent Arrow, AFSOC noted in its Wednesday email that the command is interested in seeing future demonstrations of the “aircraft-agnostic” glider, meaning that it is not limited to use with a single type of aircraft, because the glider “is expected to be able to be employed much more accurately and precisely” than current aerial delivery systems available to military forces.