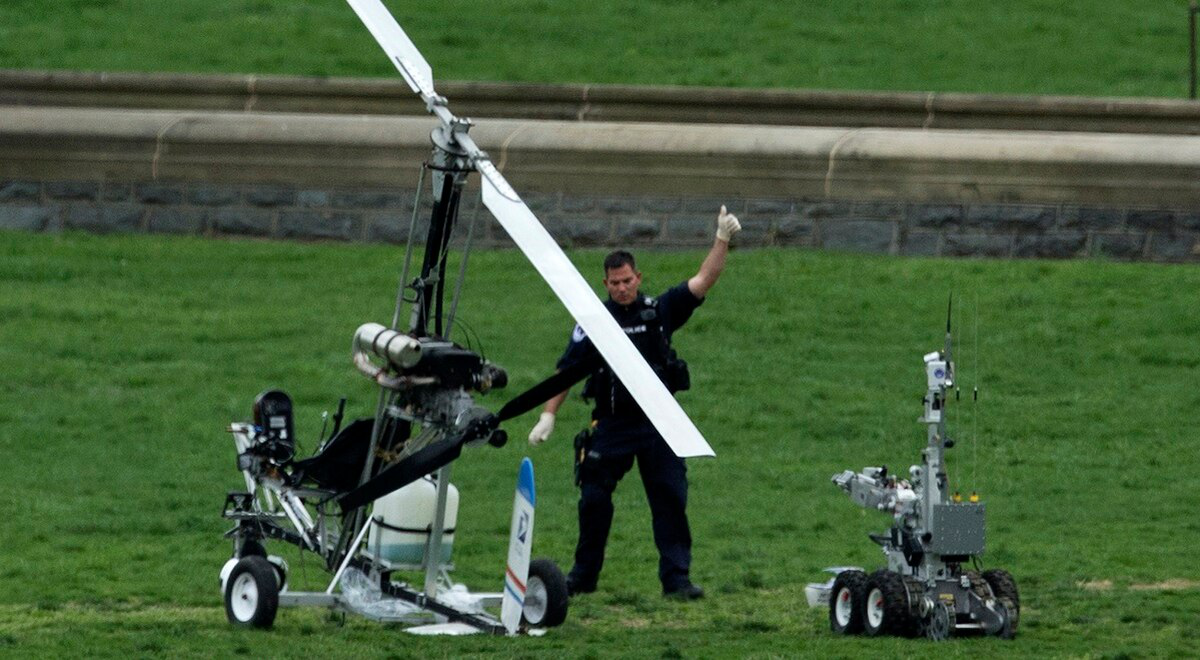 A small helicopter sits on the lawn of the U.S. Capitol on April 15, 2015. NORAD says its new artificial intelligence system would have detected the potential threat. (Manuel Balce Ceneta/AP)

“It essentially takes and ingests — aggregates — data from multiple systems, data that would in the past have been … left on the cutting room floor and not analyzed or assessed in a timely manner,” said Gen. Glen VanHerck, who commands NORAD and USNORTHCOM, during the Air Force Association’s virtual Air Warfare Symposium last week. “The Pathfinder program uses machine learning to help us analyze that data from multiple systems — not only military systems, but commercial systems, other government agency systems.”

“When you go back and look at that scenario, when you look at those systems that monitor the national Capitol region individually, no single system had full awareness or saw that gyrocopter,” he explained.

Pathfinder solves that problem by taking the data from each of those systems and fusing it into a common operating picture. In developing Pathfinder, NORAD virtually recreated the 2015 event by plugging the data from that day into its new AI-machine learning capability.

“We took Pathfinder and applied it to the available systems, the actual data, and used Pathfinder capabilities to assess that data,” said VanHerck. “And sure enough, there that gyrocopter was and he was easily detected by that point.”

To prototype pathfinder, NORAD partnered with the Defense Innovation Unit, a Pentagon organization that specializes in using emerging commercial technologies for military purposes. DIU Director Mike Brown said in December that Pathfinder was completed in record time — just a few months over a year.

In February, Kinetica announced it received a $100 million, five-year contract from the U.S. Air Force to use the Kinetica Streaming Data Warehouse for Pathfinder. The company’s service “ingests, analyzes and visualizes massive data sets … in order to model possible outcomes and assess risk,” according to Kinetica’s description.

“We’re using it today,” said VanHerck. “It’s out in our fields and our sectors right now. Historically our sectors were very manually driven — phone calls to pass data, etc. Today we fuse all that data together, and we’re seeing the picture much more real-time and much more in an automatic type of digital environment.”

“We dramatically reduced their decision time — they have about 12 minutes to make a decision if they really thought there was an attack coming in over North American airspace — and we’ve cut minutes off that by giving them this common operating picture,” said Brown.

In many ways, Pathfinder is a microcosm of the Pentagon’s Joint All Domain Command and Control concept, which seeks to use AI and emerging technologies to connect every sensor to the best shooter.

“What we’ve been able to do with NORAD in this fusing of sensor data and providing a common operating picture for better decision making, if you think about it, that’s the guts of what’s in JADC2,” said Brown. “That technology is going to continue to have broad applicability. And I won’t be surprised at all as we work on some other projects to see other applications of that basic technology be delivered.”

“I absolutely believe it can be a model for the Department of Defense,” said VanHerck. “It lays the foundation for improved data-driven decision-making and enhanced capability.”