A War With China Would Spread To Land, Says Army Tanker

“China’s proven it will not self-limit in competition, so we cannot expect them to self-limit in conflict,” said Maj. Gen. Richard Ross Coffman, who heads armored vehicle modernization at Army Futures Command. “We’ve got to be able to fight no matter where we are.” 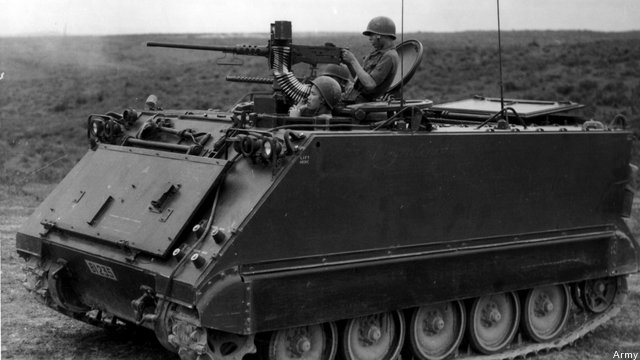 WASHINGTON: As the Army develops its replacement for the Reagan-era M2 Bradley, the Optionally Manned Fighting Vehicle, it’ll study OMFV’s ability to traverse roads and bridges in Indo-Pacific countries as well as Eastern Europe, the service’s director of armored vehicle modernization told me.

The reason? As Maj. Gen. Richard Ross Coffman, a tanker himself, emphasized in a CSIS webcast Wednesday, while any conflict with China may start at sea or in the air, there’s no guarantee it’ll stay there – and in any land battle, you need armored vehicles, as shown by Pacific history from Iwo Jima to Hue.

China’s strategy has been to push for advantage around the globe, so a shooting war that starts in the South China Sea or Senkaku Islands might metastasize to land battles as far afield as Africa, where China has a growing presence, Coffman told the CSIS event. Or, as he put it to me afterwards: “China’s proven it will not self-limit in [peacetime] competition, so we cannot expect them to self-limit in [armed] conflict. The place and time of that conflict are yet to be determined, so we’ve got to be able fight no matter where we are.”

That brings us to the Optionally Manned Fighting Vehicle, meant to transport infantry soldiers under armor protection and provide supporting fire during a foot assault. Instead of mandating a particular maximum weight,the Army had asked industry to submit OMFV designs that could safely traverse 80 percent of major routes and bridges in “pacing threat countries.” That had widely been interpreted as meaning Eastern Europe – but now, Coffman says, it will include Indo-Pacific countries as well.

“The bridges in Eastern Europe are fairly representative of many places in INDOPACOM [Indo-Pacific Command]; there are some better, some worse,” Coffman told me. “The Army needs to look and see… if you look at the Indo-Pacific region, do we need to be more restrictive?”

(The Army is also building a light tank called Mobile Protected Firepower (MPF), specifically to be easier to deploy to distant and difficult terrain than the massive M1 Abrams. MPF would be better suited to combat in mountains and jungles than Abrams, and it could provide heavy firepower to support the troop-carrying OMFV).

It’s all too easy to assume armored warfare is a European phenomenon and armored forces aren’t needed in the Pacific theater, Coffman told the CSIS webcast. But in fact, 20th century history is full of tank battles in what’s now defined as INDOPACOM. That includes American lightweight Stuarts and mid-weight Shermans consistently outgunning Japanese tanks on Pacific islands in World War II. It also includes M48 tanks and M113 ACAVs – modified troop carriers rather like OMFV – clearing trails in the Vietnamese highlands and fighting for cities like Hue during the Tet Offensive. When North Vietnam finally conquered the south, it sent in armored columns, not just guerrillas. India and Pakistan have fought massive tank battles in their past wars, and India even airlifted light tanks to its Himalayan frontier to stop a Chinese offensive in 1962.

Today, China itself has about 3,000 main battle tanks and 7,000 infantry fighting vehicles (armed and armored troop transports like the current Bradley or future OMFV), Coffman noted. “China has a long history of fighting on their periphery [on land]; they use armored vehicles, every time,” he said. “we have to be there with armor to prevent Chinese to getting into a position of relative advantage.”

Coffman’s statements come in the context of the Pentagon’s escalating budget wars, as the Biden Administration looks to rein in spending while maintaining the Trump era’s focus on China as the “pacing threat.” The Pacific is historically a Navy-dominated theater, and competition with China has largely been framed in terms of sea, air, space, and cyber-power, not land forces. No less a figure than former Army Chief of Staff Gen. Mark Milley, now chairman of the Joint Chiefs of Staff, predicted a budgetary “bloodletting” in which ground forces were slashed in favor of sea and air.

True, China has a long land border, but much of it is with Russia – currently an ally – and North Korea, a client state. And while Vietnam and South Korea have fought land wars with China throughout their history, US allies like Japan, the Philippines, and Taiwan are separated from China by water.

However, China’s strategy of fortifying artificial islands in the South China Sea, and US investment in land-based missiles, suggests any naval war would involve clashes over island bases. How big a role armored vehicles would play in such a conflict – and what share of the budget they should get – is clearly a topic the Army now wants to put on the table.