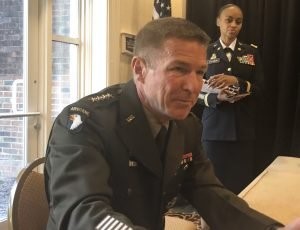 WASHINGTON: The Army aims to outmaneuver and outthink its adversaries so thoroughly it achieves “decision dominance,” its generals said in unison this week. Will the new term became the latest bureaucratic buzzword or shed real light on how the future force should fight?

I first noticed “decision dominance” pop up during a morning panel on the first day of AUSA’s virtual Global Force Next conference, but the term really thundered forth that day during midday remarks by the Army Chief of Staff, Gen. James McConville.

The Army must move faster, McConville, declared, both as an institution developing new weapons – not in decades, but in a few years – and as a battlefield force destroying enemies – firing artillery, not minutes after spotting a target, but seconds.

“Today, we’re getting from [a list of desired] characteristics to fielded capabilities in as short a time as three years,” McConville said. “This allows us to think and innovate faster. And as a result we operate faster: For example, at last year’s Project Convergence exercise, we engaged targets in tens of seconds instead of tens of minutes.”

But the chief of staff didn’t explain further. Instead, he left it to the service’s modernization czar, Army Futures Command chief Gen. John “Mike” Murray, the following day.

That’s a variant of Air Force Col. John Boyd’s famous OODA loop, developed first to describe jet fighter duels but later expanded to all kinds of time-sensitive decision making: Observe the situation, Orient yourself to it, Decide, and Act. The theory is that mental quickness can be decisive, with the side that cycles through the OODA loop faster getting a compounding advantage over time, with the quicker party changing the situation faster than the slower can keep up with, causing them to be increasingly disconnected from reality.