Drones Could One Day Make Up 40% of a Carrier Air Wing, Navy Says

The Department’s new unmanned plan directs focus not just on drones but on their “enabling technologies.” 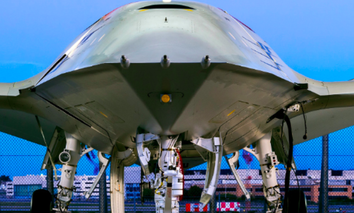 One day, drones may make up nearly half of a carrier air wing — but don’t expect that overnight, the Navy’s warfighting requirements chief told lawmakers this week.

“We think we could get upwards of 40 percent of the aircraft in an air wing that are unmanned and then transition beyond that. So I think the logical step would be trying to follow a logical crawl, walk, run,” Vice Adm. James Kilby told lawmakers gathered for a Thursday hearing.

Kilby, the deputy chief of naval operations for warfighting requirements and capabilities, was on Capitol Hill to discuss the Navy Department’s new Unmanned Campaign Framework, which covers uncrewed ground, maritime, and airborne weapons. Lawmakers have been skeptical of the Navy’s unmanned plans for some time. Kilby said the new report had led Navy leaders to conclude that “we were focused on platforms too narrowly and not looking at the enabling technologies that will bring those all to bear.”

The Framework outlines a plan to move toward smaller tactical networks, more distributed data storage and the use of artificial intelligence, thus decreasing the importance of any single platform that’s part of a swarm or group.

The service is looking at converting its MQ-25, a yet-to-be-deployed long-range tanker drone, into an attack aircraft that could go after targets too dangerous for manned ships and aircraft to approach,. But first comes a long, multi-step process of experimentation and development.

“There is some payload capacity in that vehicle that we think has great promise for us,” Kilby said. “Let’s figure out how to handle it in the air wing. Let’s move to [intelligence surveillance and reconnaissance], maybe electronic attack, strike, and then other things as complexity grows across that mission set. But I think the MQ-25 has great promise for us.”

The Navy has been going back and forth on just what it wants aircraft carrier drones to do. In the 2000s, it paid Northrop Grumman to build the X-47B strike drone, which proceeded to land on an aircraft carrier and fly alongside manned aircraft. The military saw unmanned strike drones as essential as China was fielding missiles that could hit aircraft carriers out to 1,500 km, which would make it hard for the carriers to get close to enough for the jets on their decks to be of any use.

But in 2016, the Navy shifted the program to build a tanker drone with much more limited strike capability, hiring Boeing to build the MQ-25. Said Kilby: “The MQ-25 will most certainly provide promise to us because it will be able to perhaps exceed the endurance of a manned aircraft.” Boeing expects to deliver a fully-operational MQ-25 in 2024.