Overmatch is fleeting: How the US Army’s multidomain task force will help the military remain dominant 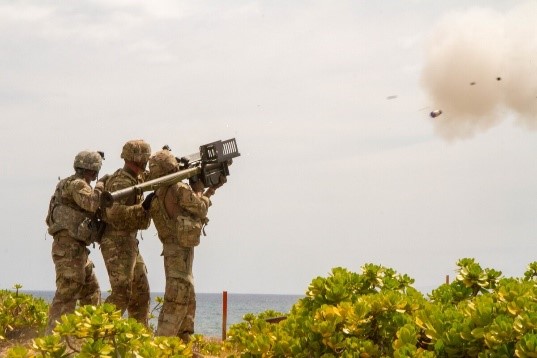 A stinger missile is launched using a Man-Portable Air Defense Systems during a live-fire training exercise as part of the Rim of the Pacific exercise in 2018. (Capt. Rachael Jeffcoat/U.S. Army)

WASHINGTON — The U.S. Army’s multidomain task force might have started out as an experimental unit, but a new plan to operationalize it puts the unit front and center in competition, crisis and conflict against adversaries.

The move is detailed in an Army whitepaper released March 23, in which the service acknowledges it must transform now to meet future challenges.

“Although our Army still maintains overmatch, it is fleeting,” the service wrote.

“By 2040, China and Russia will have weaponized all instruments of national power to undermine the collective wills of the United States, Allies and partners, while simultaneously cultivating their own security partnerships. This will lead to an unstructured international environment where the line between conflict and peace is blurred,” the whitepaper added. “As China and Russia continue to modernize their militaries, the Joint Force will find it increasingly difficult to deter their illicit and aggressive actions.”

The Army identifies China as the country that poses the “most enduring strategic challenge” and is likely to reach “military parity” with the U.S. military by 2040.

The first multidomain task force was stood up at Joint Base Lewis-McChord several years ago to participate in Indo-Pacific Command theater exercises to help inform the Army’s Multi-Domain Operations war-fighting concept as it evolves into doctrine.

This unit, which is aligned to U.S. Army Pacific, “represents the first of these units to bring multi-domain capabilities to combatant commanders,” the paper noted. “The MDTF’s All-Domain Operations Center, or ADOC, is currently under construction and will enable 24/7 oversight of adversary contact in all domains.”

The MDTF is expected to be the centerpiece of Project Convergence 2021, an annual campaign of learning that examines how the Army and the joint force will conduct multidomain operations.

The Army has previously discussed plans to add a second MDTF assigned to the Pacific as well as another for Europe, and the service recently unveiled plans to have one located in the Arctic. But the whitepaper makes it clear the Army wants to build five of these units, with one that is “aligned for global response,” the paper stated.

The document also noted the MDTF in the Arctic will be tailored to deal with “multiple threats.”

“MDTFs represent agile development embodied in an organization,” the paper stated. While the conventional force generation mans, trains and equips organizations and then provides them to combatant commanders, “MDTFs break this mold.”