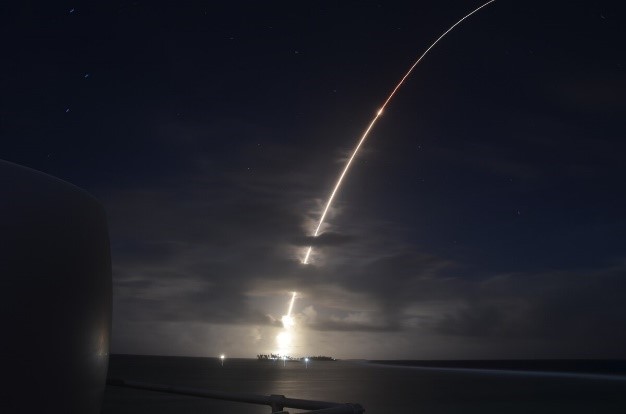 A threat-representative ICBM target launches from the Ronald Reagan Ballistic Missile Defense Test Site on Kwajalein Atoll in the Republic of the Marshall Islands on March 25, 2019. (Courtesy of the U.S. Missile Defense Agency)

This story was updated to include comments from Northrop Grumman, Lockheed Martin and Boeing.

WASHINGTON — The Pentagon has selected Lockheed Martin and Northrop Grumman to go head-to-head in a competition to provide a next-generation interceptor to replace the ground-based interceptors in Alaska and California that are designed to defend the United States against ballistic missile attacks from North Korea and Iran.

Boeing submitted a bid with team members General Atomics Electromagnetic Systems and Aerojet Rocketdyne to build the Next-Generation Interceptor (NGI), but was not chosen to continue on in the effort. The company has an extensive history with the Ground-based Midcourse Defense system in place at Fort Greely, Alaska, and Vandenberg Air Force Base, California, having held the development and sustainment contract for years.

The contract has an estimated maximum value of $1.6 billion through fiscal 2022 and will carry both designs into the technology development and risk reduction phase of the program, according to a March 23 Pentagon announcement. “This award will ensure NGI is an efficient and effective part of an integrated Missile Defense System solution,” the statement read.

The Pentagon announced in August 2019 its intention to build a new NGI after the Redesigned Kill Vehicle (RKV) program — that would upgrade the GBI with the ability to go after more complex threats more reliably — was abruptly killed. RKV struggled with insurmountable technical issues resulting in delayed schedules and cost increases.

Roughly eight months later, MDA released a request for proposals for its NGI with the aim to downselect to two companies who would then compete for the right to build the interceptor.

A Northrop Grumman and Raytheon team announced its intention to bid together in May 2020.

Lockheed Martin teamed up with Aerojet Rocketdyne in October. The company announced its plans to buy Aerojet in December.

“NGI is the result of the first holistic technical assessment of homeland defenses the department has conducted since initial system operations began in 2004,” Vice Adm. Jon Hill, the director of Missile Defense Agency, said in the statement.

“By planning to carry two vendors through technology development, MDA will maximize the benefits of competition to deliver the most effective and reliable homeland defense missile to the warfighter as soon as possible. Once fielded, this new homeland defense interceptor will be capable of defeating expected threat advances into the 2030s and beyond,” he added.

The down-select to two competitors for NGI was expected late last year, but approval of the plan was delayed until the defense secretary and deputy defense secretary in the new Biden Administration were in place.