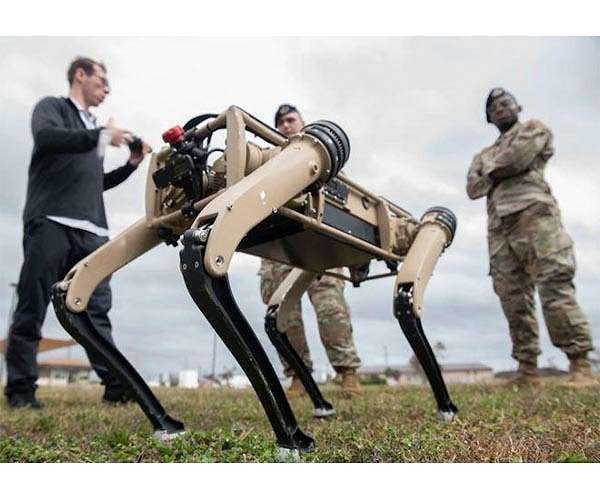 The semi-autonomous machines, which walk on four legs and resemble dogs’ bodies, were integrated into the 325th Security Forces Squadron at the base on March 22.

The Q-UGVs are not meant to replace military working dogs, officials have said, but to add another layer of protection at the base with assigned patrol paths difficult for humans and vehicles.

“They can patrol the remote areas of a base while defenders can continue to patrol and monitor other critical areas of an installation,” Shackley said.

The robot dogs carry a variety of cameras and other sensors, can traverse difficult terrain in extreme temperatures, crouch for a lower center of gravity and have a “high-step” mode to change leg mobility.

Designed by Ghost Robotics of Philadelphia and Immersive Wisdom of Boca Raton, Fla., prototype versions of the robots have been seen at the base since November 2020.

“These dogs will be an extra set of eyes and ears while computing large amounts of data at strategic locations throughout Tyndall Air Force Base,” Maj. Gen. Jordan Criss, 325th SCS commander, said in November.

“They will be a huge enhancement for our defenders and allow flexibility in the posting and response of our personnel,” Criss said.

Tyndall Air Force Base, known as the “Installation of the Future,” is regarded as an ideal test bed for the robot dogs because the base is proceeding with an ongoing reconstruction after sustaining massive damage in 2018 during Hurricane Michael.