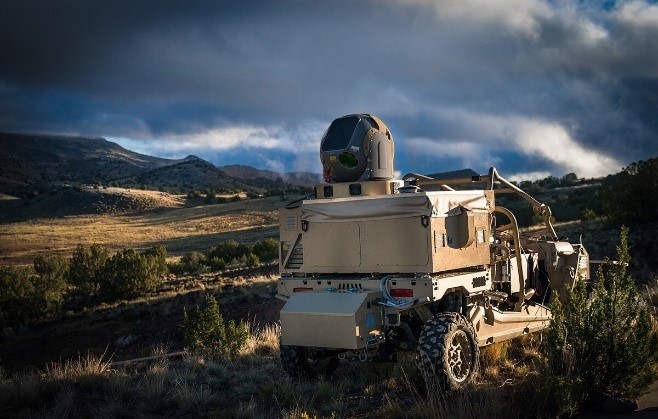 WASHINGTON — The U.S. Air Force awarded Raytheon Technologies a $15.5 million contract to deliver an upgraded version of its dune buggy-mounted laser weapon system, which the company says will inform requirements for a future program of record.

Raytheon has been rapidly prototyping its high-energy laser weapon system, or HELWS, for the military since 2019, when the Air Force Research Laboratory awarded the company a $23.8 million contract for two prototypes. Later that year the company secured another $13.1 million for a third prototype.

HELWS uses directed energy to destroy small unmanned aerial systems. The weapon is capable of defeating a drone within three kilometers by keeping its beam focused on the threat for five consecutive seconds. Operators control the weapon with a game-style controller and a laptop. The Air Force hopes directed-energy weapons like HELWS can help defend its bases from small drone threats.

Raytheon has delivered three prototypes to the Air Force, with the first deployed overseas for testing in early 2020 and the second deployed later that year.

“With thousands of operation hours under its belt, our HELWS system has proven its mettle,” Annabel Flores, vice president of electronic warfare systems at Raytheon Intelligence & Space, said in a March 31 statement. “Now we have the opportunity to build another, more robust laser system for the Air Force’s premier organization and take a key step toward defining an air base air defense program of record.”

While HELWS prototypes are attached to off-road vehicles, under the $15.5 million contract the system will be delivered unmounted on pallets for potential use with different platforms.

This latest contract was issued by the Air Force Lifecycle Management Center, which will test HELWS to define requirements for future counter-drone production programs and make a recommendation to a procurement authority. Raytheon will support Air Force field assessments and help train operators.