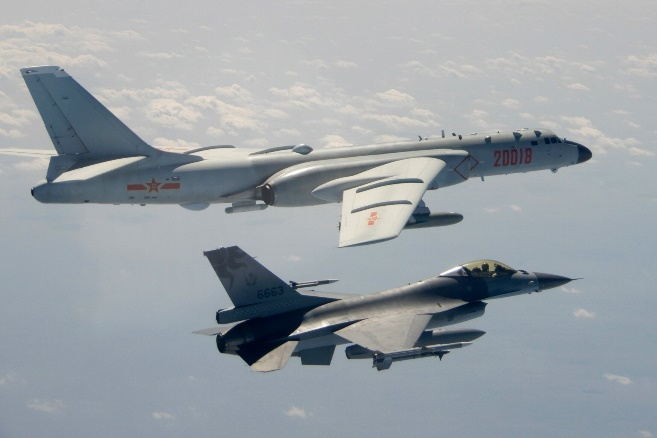 In this Feb. 10, 2020, image released by Taiwan’s government, a Taiwanese Air Force F-16, foreground, flies on the flank of a Chinese H-6 bomber as it passes near the island. (Taiwanese Ministry of National Defense via AP)

WASHINGTON — The U.S. Air Force repelled a Chinese invasion of Taiwan during a massive war game last fall by relying on drones acting as a sensing grid, an advanced sixth-generation fighter jet able to penetrate the most contested environments, cargo planes dropping pallets of guided munitions and other novel technologies yet unseen on the modern battlefield.

The outcome of the war game was a United States victory, where the U.S. Air Force helped rebuff the Chinese military from taking over Taiwan. But any U.S. fight with a nation-state like China has the potential to be catastrophic for both countries.

Both the United States and Taiwan suffered high levels of attrition during the exercise, with an even higher rate of casualties among Chinese forces. Hinote declined to share exact figures due to the classification of the exercise, but said the Air Force incurred losses an “order of magnitude” lower than those projected by the service in its 2018 war game.

But the service’s success was ultimately pyrrhic. After much loss of life and equipment, the U.S. military was able to prevent a total takeover of Taiwan by confining Chinese forces to a single area.

Furthermore, the air force that fought in the simulated conflict isn’t one that exists today, nor is it one the service is seemingly on a path to realize. While legacy planes like the B-52 bomber and newer ones like the F-35 Joint Strike Fighter played a role, many key technologies featured during the exercise are not in production or even planned for development by the service.

Still, the outcome was a marked improvement to similar war games held over the last two years, which ended in catastrophic losses. The Air Force’s performance this fall offers a clearer vision of what mix of aircraft, drones, networks and other weapons systems it will need in the next decade if it hopes to beat China in a potential war. Some of those items could influence fiscal 2023 budget deliberations.

China is “iterating so rapidly, and I think that forces us to change,” said Lt. Gen. Clint Hinote, the Air Force’s deputy chief of staff for strategy, integration and requirements, told Defense News in March. “If we can change, we can win.”

Air Force officials talked about the classified war game’s results with Defense News in March, just months before the service is set to release its fiscal 2022 budget — its first spending request under the new Biden administration.

In similar war games held in 2018 and 2019, the Air Force failed disastrously.

For the war game, the Air Force made several underlying assumptions that the U.S. military and its partners will be successful in overcoming certain fiscal and technological challenges.

For example, in the service’s version of the future, the U.S. military had implemented its Joint All-Domain Command and Control concept, which would allow the armed services to send data among their previously unconnected sensors and shooters. This meant the Air Force had fielded its Advanced Battle Management System, which could work with networks and communications technologies procured as part of the Navy’s Project Overmatch and the Army’s Project Convergence efforts.

In addition, before the conflict started, the Air Force took steps to disaggregate both its operational footprint and its command-and-control structure. It made investments to remote airfields across the Pacific region — fortifying and lengthening runways as well as pre-positioning repair equipment and fuel — so that forces could deploy to those locations during a war instead of main operational bases. This approach is something the service calls “agile combat employment.”

“We tried to design ourselves where we would be a hard target. As an example, we never filled up any airfield more than 50 percent, so even if you lost that entire airfield, you wouldn’t lose your entire fleet,” Hinote said.

Now, what has emerged is a list of what the Air Force thinks it needs to win a war after 2030:

The air power community has been divided in recent years over how to affordably replace the Air Force’s aging tactical aircraft fleet while ensuring there are enough advanced fighters to battle the likes of Russia or China.

Should the service move forward with its plan to eventually replace the A-10, F-16 and some F-15C/D aircraft with stealthy fifth-generation F-35s? Or could a mix of F-35s and new fourth-generation jets like the F-15EX give the service more flexibility?

In the war game, four types of aircraft made up the Air Force’s future fighter inventory. Three of those are ongoing programs of record for the service:

Finally, the service operated a non-stealthy, light, tactical fighter for homeland and base defense, which could also be flown in support of counterterrorism missions. That aircraft, which aligns with Brown’s idea for a “fourth-generation plus” replacement for the F-16, doesn’t currently exist in the service’s budget plans.

or years, Air Force officials have portrayed the F-35 as the aircraft that it would use to infiltrate into enemy airspace to knock out surface-to-air missiles and other threats without being seen. However, in the war game, that role was played by the more survivable NGAD, in part due to the F-35′s inability to traverse the long ranges of the Pacific without a tanker nearby, Hinote said.

Instead, the F-35 attacked Chinese surface ships and ground targets, protected American and Taiwanese assets from Chinese aircraft, and provided cruise missile defense during the exercise. But “it’s not the one that’s pushing all the way in [Chinese airspace], or even over China’s territory,” Hinote said.

Notably, the F-35s used during the war game were the more advanced  F-35 Block 4 aircraft under development, which will feature a suite of new computing equipment known as“Tech Refresh 3,” enhancements to its radar and electronic warfare systems, and new weapons.

For the war game, the Air Force relied on a mix of systems that are either under development or not currently sought by the service’s acquisition arm.

Autonomous “Loyal Wingman” drones flew alongside penetrating fighters  in contested zones, providing additional firepower and sensor data to human pilots. Hinote pointed toAustralia’s Loyal Wingman aircraft, which is produced by Boeing and flew for the first time in February, as an “impressive” capability that the U.S. sought to mirror in its war game.

Across the Taiwan Strait, the service operated a mass of small, inexpensive drones that formed a mesh network. Although they were mostly used as a sensing grid, some were outfitted with weapons capable of — for instance — hitting small ships moving from the Chinese mainland across the strait.

In the second island chain, the Air Force operated low-cost attritable drones out of installations such as Andersen Air Force Base in Guam. These aircraft, like the Kratos XQ-58A Valkyrie currently undergoing tests by the service, delivered ordnance against ships, aircraft and ground-based targets. Attritable drones are cheap enough that combat losses can be endured by commanders.

Even farther out, the service flew a notional successor to the RQ-4 Global Hawk, which Hinote said would not survive a conflict with China in the mid-2030s.

Neither China nor the United States resorted to using nuclear weapons during the war game — a consequence, Hinote said, of being able to present a credible threat to China that the U.S. has the arsenal necessary to retaliate to a Chinese strike. However, the B-21 and B-52 bombers played active roles, providing conventional firepower during the scenario, with the B-21 penetrating into contested zones and the B-52 remaining at standoff distances.