Biden requests $715B for Pentagon, hinting at administration’s future priorities 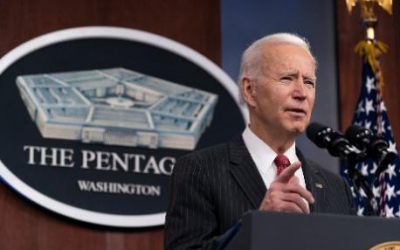 The request, rolled out Friday, amounts to a slight decrease for the Pentagon when adjusted for inflation, and it’s well shy of the Trump administration’s projected $722 billion request for FY22. The proposal would also end the off-budget funding pool known the overseas contingency operations, or OCO, account.

The first installment of Biden’s budget plan contained only top-line discretionary spending numbers. A more detailed budget is expected in May or June, although that is not expected to include reliable numbers for the Future Years Defense Program, or FYDP, projections.

Lawmakers, for years under the Budget Control Act caps, have carved spending deals with rough parity between defense and nondefense spending. With the BCA expired, Biden wants to boost nondefense by 16 percent, to $769 billion. (Administration officials tout the number as 3.3 percent of gross domestic product, which is roughly equal to a 30-year average.)

“A chunk of this budget request, on the defense side in particular, is to pay for the pay raise for men and women in uniform, and then the civilians that support them; I think that’s something we could find support for on both sides of the aisle” an administration official told reporters Friday. “The focus will be on investments on nondefense, but also ensuring the Defense Department he can continue its strategic goals as we outcompete China, and as we ensure that the men and women in uniform have everything that they need.”

The overall national security top line of $753 billion includes $38 billion not earmarked for the Pentagon. While the budget document does not spell out where that money is going, a large chunk of that is traditionally tied up in the National Nuclear Security Administration,a semiautonomous agency . within the Energy Department that handles nuclear warheads.

The Biden administration is requesting a $715 billion budget for the Pentagon, keeping defense spending largely flat when adjusting for inflation, the White House announced today.

While the Pentagon top line in the Biden submission is $715 billion, the total defense spending request is $753 billion, which includes funding for the Department of Energy for developing and maintaining nuclear weapons, as well as money for the Maritime Administration.

The Pentagon’s enacted spending for FY 2021 is $704.5 billion, with total defense spending for the current fiscal year at $731.6 billion, according to the Congressional Research Service.

The summary also alludes to cuts to legacy platforms that the administration argues are not providing a return on investment.