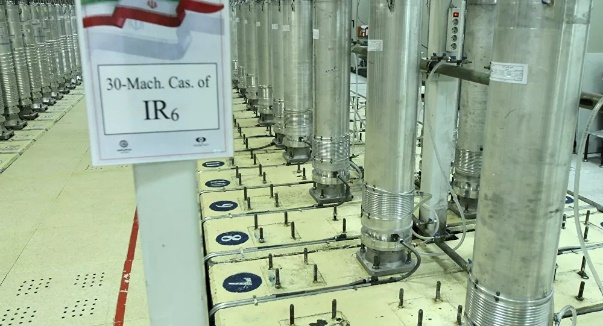 Israeli media earlier alleged that the incident was not an “accident” but the result of a cyberattack, possibly carried out by Tel Aviv. The outlet did not reveal its sources, but Natanz in the past had already fallen victim to a hacker attack via the Stuxnet virus.

“Iran condemns this heinous attack and reminds the international community and the [International Atomic Energy Agency] of the need to combat such acts of nuclear terrorism”, Salehi said.

The vice-president added that the Islamic republic reserves the right to respond appropriately to whoever Tehran finds is guilty of the attack. At the same time, Salehi described today’s incident at the nuclear plant as “evidence” that Iran’s enemies were “failing” to impede the country’s success in the sphere of nuclear energy and in negotiations, by which he presumably meant talks between the US and Tehran on their both returning to the JCPOA, or Iran nuclear deal.

Earlier, a member of Iran’s parliament, Malek Shariati Niasar said that Tehran also suspects an act of “sabotage” caused the incident at the nuclear facility, which did not result in casualties or pollution, but led to the shutdown of its power grid. He noted that the power grid incident took place on Iran’s National Nuclear Technology Day and also amid attempts to return the US to complying with the Iran nuclear deal and lift its sanctions.

The events at the Natanz plant also unfolded the day after Iranian President Hassan Rouhani announced the start of using new advanced centrifuges for uranium enrichment – IR-6 and IR-5. Tehran had previously been banned from using any centrifuges except for the first generation ones under the Joint Comprehensive Plan of Action (JCPOA, also known as the Iran nuclear deal). However, the country has been gradually backtracking on its commitments since the US withdrew from the treaty in 2018. Now, the two countries are attempting to agree on terms of returning to the JCPOA compliance.

Ahead of Vice-President Salehi’s announcement, The Jerusalem Post newspaper issued a report, claiming that the 11 April incident at Natanz was not an “accident”, but the result of a cyberattack, and resulted in greater damage to the facility than Tehran is ready to admit. The media outlet did not reveal its sources, but alleged that Israel might be behind the purported cyber intrusion.

If the report true, this will be at least the second time Natanz is hit with a cyberattack in its history. Back in 2010, Tehran reported that some of its centrifuges have been damaged as the result of the hackers’ actions without specifying their allegiance.

Several cybersecurity companies reported that a virus called Stuxnet was released into cyberspace some time ago and was designed to target specific computer systems working on the Windows OS and operating Siemens industrial equipment, which reportedly is what the Iranian nuclear facilities use. The virus infected the machines operating the centrifuges, reportedly forcing them to spin at extreme speeds and in effect ripping themselves apart.

Additionally, several media reports suggested that Stuxnet was developed jointly by Israeli and American specialists, and released by Tel Aviv against the Iranian nuclear facility. Neither Washington nor Tel Aviv confirmed or denied the report.