“There’s capabilities out on the bench, on the floor, sitting out back in the parking lot,” said Army senior executive Michael Monteleone, who founded the Joint Systems Integration Laboratory. 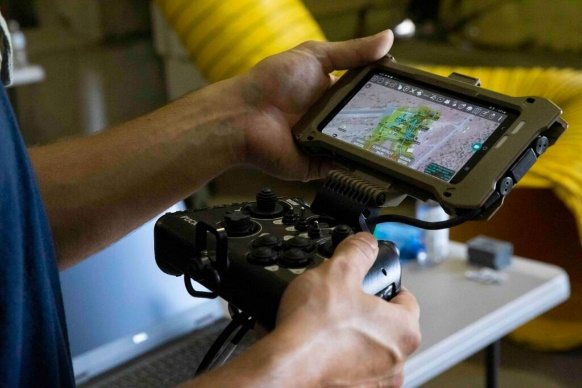 WASHINGTON: Hundreds of scientists, engineers, and support staff at nine locations worked feverishly earlier this month testing dozens of technologies ahead of this fall’s joint  Project Convergence wargames.  The hub for the event, Communications Exercise (COMEX) 2, was a new facility at the Army’s Aberdeen, Md.C5ISR Center, the Joint Systems Integration Laboratory. 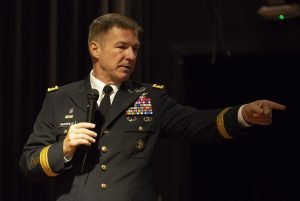 The JSIL was touted by no less a figure than Army Chief of Staff Gen. James McConville – normally not one to get into the technical weeds – in a recent Brookings webcast:

“We’ve stood up a laboratory at Aberdeen we’re calling the Joint [Systems] Integration Laboratory,” McConville said, “[because] what really we all recognize — all the [service] chiefs recognize – is we’ve got to be able to move data machine to machine…. very, very quickly. And what that laboratory allows us to do is to practice it.” Such connectivity, McConville said, is vital to the future all-service network-of-networks called Joint All Domain Command & Control (JADC2).

During the COMEX, McConville toured the new lab with at least two of his fellow Joint Chiefs of Staff. The JCS met at Aberdeen to discuss JADC2, and afterward “they got an opportunity to come over to the lab,” said the network modernization director, Maj. Gen. Peter Gallagher.

“They were asking very good, very pointed questions,” Gallagher told a recent Potomac Officers Club event. “Gen. said it could not have gone any better.”

The JSIL, which declared Full Operational Capability in mid-March, has a core staff of less than 20 to keep the lights on and the computers humming. During COMEX 2, however, about 150 people are working at JSIL alone, not counting the eight other sites across the Army, Air Force, Navy, and Marine Corps.

The place is packed, said Army Senior Executive Service member Michael Monteleone, director of space and terrestrial communications at the C5ISR center, who created the JSIL out of an existing, more limited lab. “Sydney, this is about as real as it gets,” he said in a conference call last week. “There’s capabilities out on the bench, on the floor, sitting out back in the parking lot.”

COMEX 2 isn’t a formal pass-fail test, Army officials emphasized, but an experiment to see if a host of different technologies – some already in service with the Army or other services, others new candidates from industry – can share data with each other. (A smaller COMEX 1 was held in January). Promising technologies have a leg up on being included in both Project Convergence and future upgrades to the Army’s Integrated Tactical Network, Capability Set 2023 and CS25.

In the first Project Convergence, the Army didn’t have as much prep time, so a lot of the bugs got worked out – or didn’t – on-site in Yuma in the last six weeks before the wargames began last fall, and the only joint participation, by Marine F-35s, was a last-minute addition. This year, extensive involvement by the Air Force, Navy and Marines is planned from the start, and the Army is thrashing out how to connect all their tech in a controlled laboratory setting before going to the desert.

While a lab test is obviously less complex and realistic than a test in the field, the Army says the JSIL provides a realistic and challenging “operational environment,” complete with limited-bandwidth connections and even simulated enemy jamming.

“The JSIL is comprised of many interconnected systems, at scale, to closely represent what our warfighters are using and what they would experience in the field,” Monteleone told me in a follow-up email. “It can accurately replicate joint, all-domain conditions for a tactical network environment – including limited bandwidth – and simulate operational threats such as electronic warfare.”

The Aberdeen facility isn’t alone. JSIL has a nationwide network that lets it link with other Army and joint-service labs so they can participate in its experiments. There are eight such satellite sites participating in COMEX 2, including the Army’s Multi-Domain Task Force up at Fort Lewis, Wash., the 82nd Airborne Division at Fort Bragg, NC, and five joint sites.