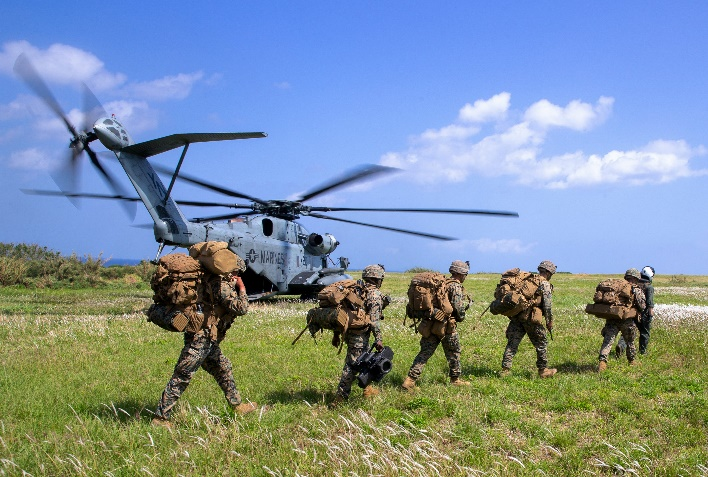 After honing naval integration and then exercising in the Indo-Pacific with the joint force, the Marine Corps is ready to take its new island-hopping campaign concept to the next level by drilling with international allies and partners.

The Marine Corps last month wrapped up two sprawling exercises in the region focused on Expeditionary Advanced Base Operations and plans to further test out the concept this summer with Australia during exercise Talisman Sabre.

“Over the next 12 months, my hope and goal is to see this command do the same thing we did recently, but to bring in our allies and partners,” Col. Mike Roach, the commanding officer of the 12th Marine Regiment, which falls under the Japan-based 3rd Marine Division, told USNI News in a recent interview. “My hope for the next one is to do this again on scale – so again over more islands, hopefully over large distance, but with allies next time.”

Last month, the Marine Corps – along with the Army, Navy, Air Force and U.S. Space Command – participated in Spartan Fury and Castaway, exercises that took place across islands in Hawaii and Okinawa, Japan, respectively. Arleigh Burke-class destroyer USS Halsey (DDG-97) participated in the exercise from Hawaii. The drills focused on practicing Expeditionary Advanced Base Operations and simulating the future capabilities, platforms and formations the Marine Corps envisions using during a potential island campaign in the Pacific against a country like China.

Roach described Castaway and Spartan Fury as “a joint Marine Corps exercise that experimented how you would command and control and operate and sustain a distributed force in a maritime environment” across two islands in Okinawa and three islands in Hawaii.

“And what we did … is basically grab the Marine artillery unit, supported by all the elements of a Marine Air-Ground Task Force – so we had elements of the aviation community, logistics community, infantry units, and information operation, Marine information units – and they all came together distributed on five islands,” Roach told USNI News.

While last year the Marine Corps concentratedon increased integration with the Navy, including the staffs of III Marine Expeditionary Force and U.S. 7th Fleet, the recent exercises helped the Marine Corps and Navy work with other parts of the joint force ahead of future training with nations in the region.

“The one thing that we didn’t do in both these exercises in Hawaii and Okinawa is we didn’t have our allies and partners integrated. What I hope to see in the future is more of that. I think we need to really get all our ducks in a row and a better understanding of how we would do that,” Roach said. “And I think in the past two years I’ve been in command, we’ve done that. So now what we want to try to do is open the aperture to bring in our allies and partners because they’re very excited about these concepts and I think also appreciate the need to operate this way in this current environment.”

During Castaway and Spartan Fury, the Marine Corps simulated elements of the Marine Littoral Regiment, a new formation the service plans to begin standing up next fiscal year.

The MLR – and the EABO concept – are part of the Marine Corps’ overall force design, an initiative aimed at shedding heavier equipment the service used during land wars in the Middle East and shifting to lighter and more mobile capabilities Marines can use to move around expeditionary bases on islands in the Pacific as they work in conjunction with the Navy’s fleet. Officials have emphasized a need for this shift as the Pentagon recalculates its strategy away from ground wars in the Middle East and toward a fight in a maritime theater like the Pacific.

The Marine Corps recently unveiled its tentative manual for EABO, a document the service says will be iterative as the fleet performs experimentation and provides feedback.

“So every time [III MEF Commanding General Lt. Gen. Stacy] Clardy goes to the field, whether it be to an exercise with the Thais or with the Filipinos or with the Australians – or honestly as we live and work daily with the Japanese on mainland Japan in the prefecture of Okinawa – every single training opportunity is actually an experimentation opportunity,” Lt. Gen. Eric Smith, the deputy commandant for combat development and integration, told reporters during a roundtable last week. Smith was referencing the thousands of Marines in the region that live within the range of China’s weapons.