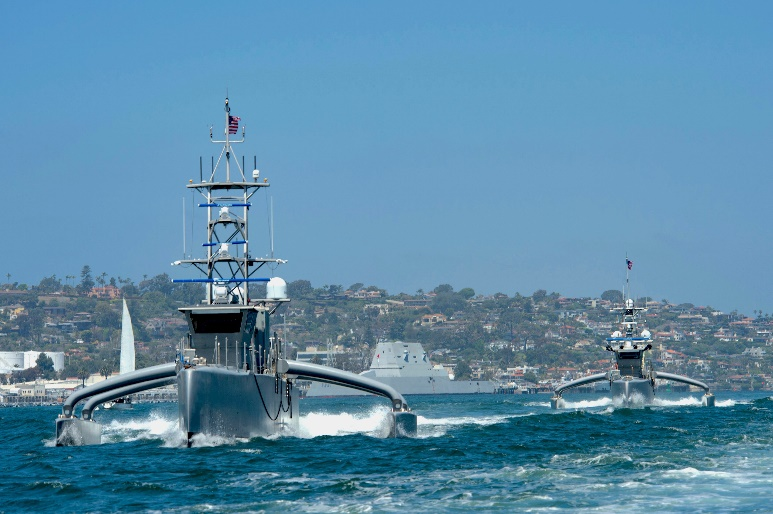 SAN DIEGO, Calif. – Off the southern California coast this week, the Navy has amassed a small fleet to help figure how its operational forces can use aerial drones, autonomous surface and subsurface vehicles in an integrated fight at sea and in the air to support the manned fleet.

That’s the overarching goal of “Unmanned Integrated Battle Problem 21,” a U.S. Pacific Fleet-led exercise to “exercise unmanned command and control, wring out tactics, techniques and procedures, and give our operators experience with unmanned systems at sea in a combat environment,” according to 3rd Fleet, which is overseeing the exercise that runs April 19 to 26.

“Our goal for this exercise is to evaluate these unmanned systems and how they can actually team with manned systems,” Rear Adm. Jim Aiken, technical manager for the exercise and Carrier Strike Group 3 commander, said during a Tuesday media call. “We’ll be able to evaluate what we can do and what we can’t do in trying to create an advantage – a warfighting advantage. Sometimes, that would be in reconnaissance, sometimes that would be surveillance, sometimes that will be we’ll be able to move data faster, command and control.”

Then “we’re going to make sure it gets into the hands of the sailors,” Aiken said, adding: “We need to move things from the technical community to the tactical community.”

“We need to move things into the hands of sailors and then let sailors use their ingenuity,” he said. Junior sailors and junior officers “just don’t sit quietly. They’re able to contribute, they’re able to apply these types of systems into capabilities in order to make warfighting” TTPs.

For well over a decade, the Navy has looked at unmanned systems – such as aerial drones that can strike targets or do surveillance to autonomous watercraft that could search for enemy boats – that would augment, if not replace, manned crews while maintaining or boosting warfighting capabilities. In recent years, it has looked closely at scores of existing and emerging technologies during various demonstration events and experimentation. Last month, the Department of the Navy released its 2021 Unmanned Campaign Plan.

So sometime this week at the Navy’s offshore ranges, “ we’re going to put a missile on a target,” said Aiken, a veteran surface warfare officer.

Sensors on both the unmanned and unmanned systems in play will collect data and information – quickly in real-time and shared among them – and develop targeting information for the missile strike, “which is something that we don’t typically do,” Aiken noted. “When we shoot a missile or shoot a gun at something, we usually have organic sensors that we use from within. We are going to use sensors. We’re going to combine sensors and fuse sensors that we typically don’t do.”

“We are going to do a live-fire offensive exercise,” he added. “We are going to use the unmanned surface, unmanned air and manned air and surface to provide a targeting solution…. It will be an offensive missile, and we’re going to strike a target well beyond line-of-sight.” He declined to specify the type of missile and platforms involved in the live-fire event, part of what he described as “operationally challenging scenarios and vignettes.”

“We want to move from just systems to capabilities,” Aiken added. Once “we operationalize it and we move to enhanced warfighting… (that would) give us an advantage where we now are able to take that information and we’re able to move it at speed.”

Some of the technology and systems that are participating in the exercise this week – Fire Scout, for example – have been operational for some time and has integrated at sea with manned crews and ships. Others, like Vanilla, operated by Maryland-based Platform Aerospace, are newer systems or innovative technologies or prototypes that joined in experimentation events and demonstrations in recent years.

The Navy has been ramping up its testing, demonstrating and prototyping of unmanned systems and autonomous technologies with the eye on getting these systems into the fleet. “We want to move to a capability. We want to start applying our operational concepts,” Aiken said. “Foundationally, as we started planning this exercise, sailors were part of the planning. Sailors talk about how we could better utilize this. And as we move forward… we’ll take those inputs…and we’ll develop the plans and procedures, the tactics to apply to operational scenarios.”

Aiken said it’s too early to know which new systems, if any, would be fielded.

“I think we want to keep our options open. He said. “We want to be able to look at different ways to produce results, as we pursue that warfighting advantage… the number of unmanned systems and manned systems that we have give the warfighters the options to get after whatever challenges that we have.”

Among the UAVs participating this week is Vanilla, a Group 3 UAS. Capability-wise, Aiken said, “it gives us a warfighting advantage. Its on-station time is such that we want to evaluate and look at its capability to contribute to the high-end fight.” That could include providing ISR or airborne communications relay.

Also joining in are ONR’s unspecific swarming technologies. “We are doing exercises to sort of evaluate,” Aiken said. “We can’t get into the specifics of how we are going to actually employ all of the manned and unmanned surface vehicles… We’ll evaluate and we’ll assess and then probably integrate into the way we do things.”