The micro-drone boat has been seen operating alongside warships as a part of large-scale maneuvers combining manned and unmanned vessels. 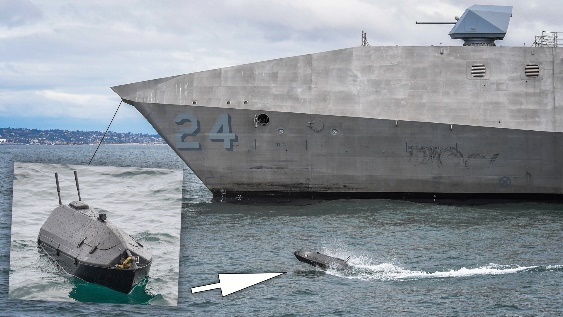 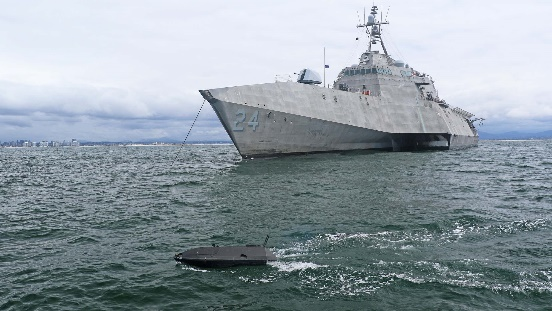 In a possible glimpse of the future of naval warfare, an apparently new type of very small unmanned surface vessel, the ADARO, has been operating with U.S. Navy surface combatants during exercises off the coast of Southern California. The drone boat, which is reminiscent of a waterborne version of a mouse droid from Star Wars, is apparently intended, at least in part, to extend intelligence, surveillance, and reconnaissance (ISR) coverage for the fleet when operating in regions close to the coast.

These maneuvers, which The War Zone reported on here, are known as the Unmanned Integrated Battle Problem 21, or UxS IBP 21, and they focus on bringing together manned and unmanned participants, including surface vessels and aircraft.

Photos released yesterday show the diminutive ADARO cutting through the waves off the bow of the newest Littoral Combat Ship USS Oakland, LCS-24, while the warship is at anchor. Another view shows the drone operating in the same U.S. Pacific Fleet exercise with the San Antonio class amphibious transport dock USS Anchorage (LPD-23) underway in the background.

Manufactured by SeaLandAire, the ADARO is a product of the Small Business Innovation Research (SBIR) program, a government initiative to support small businesses in research and development. The waterborne drone is around three feet long, weighs some 20 pounds, and is driven by a hybrid energy powerplant.

The hybrid powerplant can supply electric-only propulsion for quiet, high-speed operations, and use heavy fuel for longer-range movements. The ADARO reportedly can reach a speed of up to 25 knots and has a range of up to 230 miles.

The drone can be controlled manually or autonomously and, although it has not been described as a stealth vessel, its minimal profile and tiny size, as well as composite construction, would certainly make it difficult to detect.

ADARO is also a modular platform designed to readily accommodate various payloads. The Navy has not specified how it is configured for this particular experiment.