Washington — Standing side by side, the four Democratic congresswomen of color who were targeted in a racist tirade by President Trump that elicited widespread condemnation mounted a vigorous defense of their progressive agendas and tried to downplay the commander-in-chief’s controversial comments, which they said were just the latest episode of a pattern of bigoted and divisive rhetoric.

In a news conference at the Capitol on Monday afternoon, Democratic Reps. Alexandria Ocasio-Cortez of New York, Rashida Tlaib of Michigan, Ilhan Omar of Minnesota and Ayanna Pressley of Massachusetts said the president’s remarks were part of an effort to pit Americans against each other.

“He would love nothing more than to divide our country based on race, religion, gender, orientation or immigration status, because this is the only way he knows he can prevent the solidarity of us working together,” Omar said.

Omar noted that Mr. Trump has made divisive, sexist and racist statements both as president and during his campaign. She said it was “complete hypocrisy” for the president to say critics of his policies should leave the country.

“When people say, ‘If you say a negative thing about the policies in this country, you hate this country,’ to me it sort of speaks to the hypocrisy,” Omar said. “When this president ran and until today, he talked about everything that was wrong in this country and how he was going to make it great. And so for him to condemn us and to say we are un-American for wanting to work hard to make this country be the country we all deserve to live in, it’s complete hypocrisy.”

Her colleague Pressley struck a similar tone, saying that the group of four lawmakers represents hundreds of thousands of constituents, as well as marginalized Americans across the country.

“Despite [the president’s] attempts to marginalize us and to silence us, please know that we are more than four people. We ran on a mandate to advocate for and represent those ignored, left out and left behind. Our squad is big,” Pressley said, referring to the moniker some use to describe the four lawmakers.

To reassure children of color who could feel demonized by the president’s remarks, Ocasio-Cortez, the daughter of Puerto Rican parents, recounted a childhood memory when father took her to the reflecting pool near the Lincoln Memorial, pointed towards the other National Mall monuments and told her the country belonged to everyone — including her.

“No matter what the president says, this country belongs to you,” she said, referring to children in the U.S. 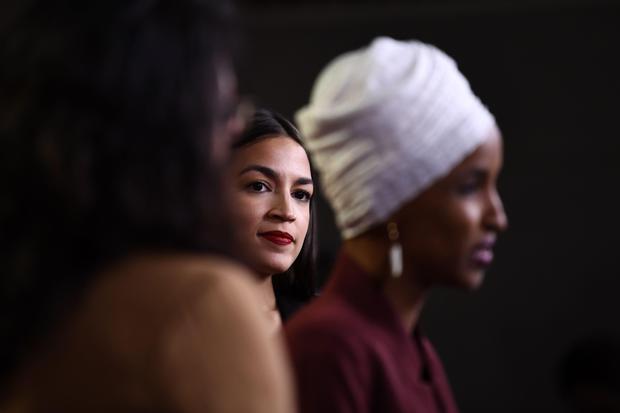 Although he did not name them, Mr. Trump on Sunday morning posted a series of tweets deriding “‘Progressive’ Democrat Congresswomen,” alluding to Omar, Pressley, Ocasio-Cortez and Tlaib.

“So interesting to see ‘Progressive’ Democrat Congresswomen, who originally came from countries whose governments are a complete and total catastrophe, the worst, most corrupt and inept anywhere in the world (if they even have a functioning government at all), now loudly and viciously telling the people of the United States, the greatest and most powerful Nation on earth, how our government is to be run,” Mr. Trump wrote on Twitter. “Why don’t they go back and help fix the totally broken and crime infested places from which they came. Then come back and show us how it is done.””These places need your help badly, you can’t leave fast enough. I’m sure that Nancy Pelosi would be very happy to quickly work out free travel arrangements!” the president added.During an event at the South Lawn on Monday, the president doubled down on his statements, saying the progressive foursome “hate our country.”

The comments drew swift and scathing condemnation on Sunday from Democrats in Congress and those hoping to challenge Mr. Trump in the general presidential election next year. Like others in her party who accused the president of stoking racial animus, Pelosi called the remarks “xenophobic.”

The speaker announced on Monday that Democratic lawmakers in the House will beintroducing a resolution to condemn the president’s racist attack. She urged her Republican colleagues to support it.

Some also pointed to the factual inaccuracies in Mr. Trump’s comments. He claimed that the four Democratic congresswomen “originally came” from foreign countries but only Omar was born outside the U.S. Pressley, an African American, was born in Ohio. Ocasio-Cortez, of Puerto Rican heritage, was born in New York. Tlaib, the daughter of Palestinian immigrants, was born in Detroit.

Omar, a naturalized U.S. citizen, was born in Somalia, a country she and her family fled from because of a civil war and ethnic strife. They stayed in a refugee camp in Kenya before settling in the U.S. when she was 10 years old, and she became a citizen at 17.

Although some Republicans refused to address the comments or demurred when asked about them, several GOP lawmakers publicly denounced Mr. Trump’s comments on Monday. Most, however, stopped short of calling them racist and made sure to note that they believe Omar, Pressley, Ocasio-Cortez and Tlaib are far-left Democrats who hold fringe views.

“I disagree strongly with many of the views and comments of some of the far-left members of the House Democratic Caucus – especially when it comes to their views on socialism, their anti-Semitic rhetoric, and their negative comments about law enforcement,” Republican Sen. Susan Collins of Maine said in a statement. “But the President’s tweet that some Members of Congress should go back to the ‘places from which they came’ was way over the line, and he should take that down.”