In June the Islamic Revolutionary Guard Corps (IRGC) announced that they had shot down a US surveillance drone over the waters of Iran’s Hormozgan province. Tehran claimed that the US RQ-4 Global Hawk spy drone had violated its airspace, while Washington claimed that the device was operating over international waters. 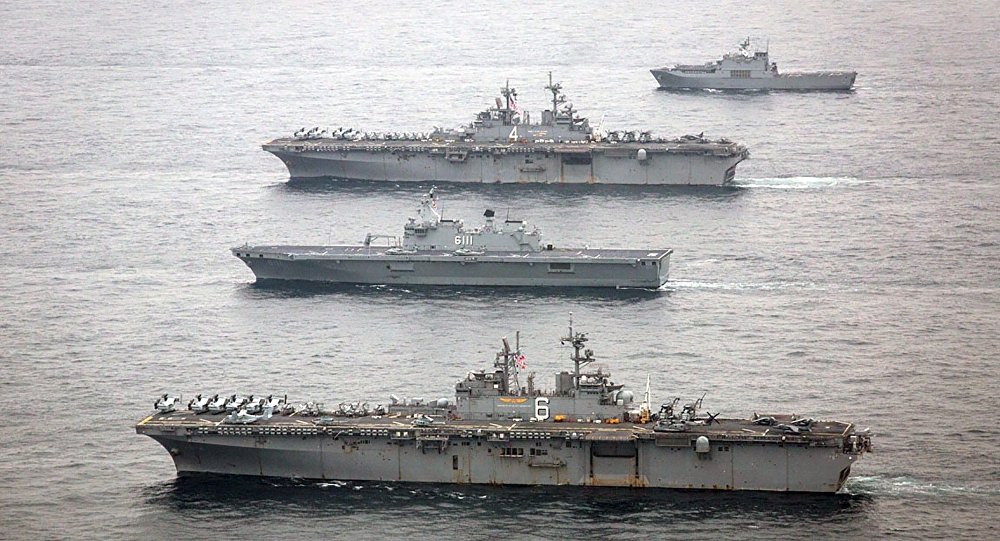 Chief Pentagon spokesman Jonathan Hoffman said on Thursday that an Iranian drone came within “threatening range” of a US warship in the Strait of Hormuz before being destroyed by US forces in a defensive action.

“At approximately 10 a.m. local time, the amphibious ship USS Boxer was in international waters conducting a planned inbound transit of the Strait of Hormuz.  A fixed wing unmanned aerial system (UAS) approached Boxer and closed within a threatening range. The ship took defensive action against the UAS to ensure the safety of the ship and its crew,” Hoffman said in an emailed statement.

Earlier, US President Donald Trump said that the USS Boxer had destroyed anIranian drone that had come within 1000 yards of the ship as it was transiting theStrait of Hormuz.

Speaking at the Flag Presentation Ceremony, Trump said that there was an “an incident in the Strait of Hormuz today involving [the] USS Boxer Navy amphibious assault ship.”

“The Boxer took defensive action against an Iranian drone which had closed into a very near distance, approximately 1,000 yards, ignoring multiple calls to stand down and was threatening the safety of the ship and the ship’s crew. The drone was immediately destroyed.”

The US president described the incident as “the latest of many provocative and hostile actions by Iran against vessels operating in international waters.”

Trump also called on “other nations to protect their ships as they go through the Strait and to work with us in the future.”

“The United States reserves the right to defend our personnel, facilities, and interests and calls upon all nations to condemn Iran’s attempts to disrupt freedom of navigation and global commerce,” he said.

There has been no confirmation on the incident from Tehran.

Tensions between the US and Iran have escalated following the unilateral US withdrawal from the 2015 Joint Comprehensive Plan of Action (JCPOA) nuclear treaty in May 2018, and a subsequent re-imposition of sanctions against Iran.

Tehran in response has gradually begun walking back certain limits of the agreement, as allowed in the conflict settlement clause of deal’s wording, as European signatories to the treaty have failed to effectively shield Tehran fromsanctions re-imposed by Washington.

In 2019, Washington started building up its military presence in the region, citing an “Iranian threat”, and the latter’s alleged intention of obtaining nuclear weapons.

Iran has reiterated that it does not seek nuclear weapons or war, with Iranian Foreign Minister Javad Zarif noting on Monday that, “Had we been interested in developing nuclear weapons, we would have been able to do it long time ago.”