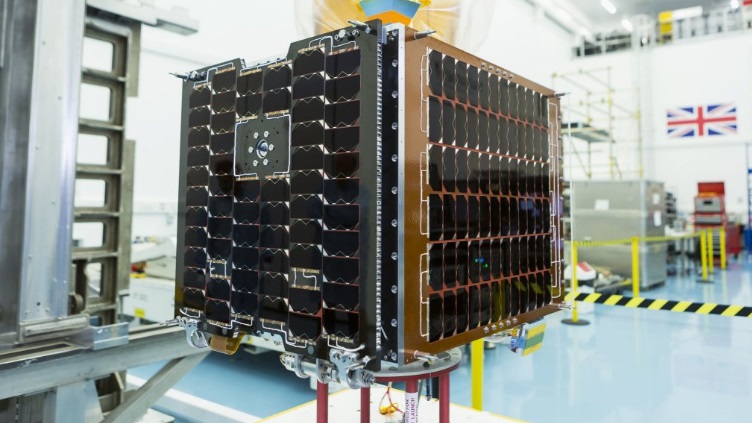 The UK’s Carbonite 2 satellite, seen here at the facilities of joint developer Surrey Satellite Technology Ltd. Carbonite 2 is the UK’s first low-Earth orbit high-definition imagery and video satellite, and is an example of the country’s engagement in the space domain. Source: Crown Copyright

The UK government has announced what it describes to be an “ambitious” defence space programme that will see more than GBP30 million (USD37.25 million) invested in a number of separate but related efforts.

Speaking at the 2019 Chief of the Air Staff’s Air and Space Power Conference (ASPC) in London on 18 July, Secretary of State for Defence Penny Mordaunt outlined the initiatives that she said would enhance the United Kingdom’s defence capabilities in the face of evolving threats from hostile actors in space.

“Space underpins everything,” she said, adding, “The successful military powers of the future are going to be those that most easily and quickly assimilate change [in the defence environment] to their advantage.”

The six new efforts outlined by Mordaunt comprise a satellite development and launch programme, a counter counter-satellite effort, the secondment of a military test pilot with a commercial space launch organisation, the creation of a new military command to oversee operations in the space domain and beyond, a competition to boost the capabilities of UK satellites in orbit, and the building of new ground control station facilities.

The small satellite demonstrator programme will see a constellation of satellites launched into low-earth orbit within a year, to be funded through an initial GBP30 million from the government’s Transformation Fund. This effort, which may eventually see live high-resolution video beamed directly into the cockpits of Royal Air Force (RAF) combat aircraft, is being supported by the newly founded Team Artemis.

The counter counter-satellite effort will see the UK become the first international partner in the United States’ Operation ‘Olympic Defender’, which is geared at countering the threat posed by hit-to-kill technologies that are being developed to bring down satellites in orbit. The UK will add eight personnel to this mission located at the Combined Space Operations Center in California over the coming 18 months.